In the typical Hollywood success story, a talented individual starts out in life with a full head of steam, gets a bad break, and then, with the help of a teacher or other mentor, overcomes adversity and the story ends on a note of triumph and tears. Things are not so simple, however, for Canadian folk artist Maud Dowley Lewis (Sally Hawkins, “The Shape of Water”) in Irish director Aisling Walsh’s (“The Daisy Chain”) fact-based film Maudie.

Written by Sherry White and powerfully performed by Hawkins, the film depicts how Maud, a self-taught painter, achieved notoriety at home after her paintings were brought to the attention of then Vice-President Richard Nixon, but had to face a lifelong struggle with crippling rheumatoid arthritis and a contentious relationship with her husband (Ethan Hawke, “The Magnificent Seven”).

Spanning several decades beginning in the 1930s in rural Nova Scotia, Maud is constantly berated by her controlling Aunt Ida (Gabrielle Rose, “A Dog’s Purpose”), but reaches the breaking point when she learns that her brother Charles (Zachary Bennett, “Still Mine”) has sold the family home in which Maud grew up in and to which she was eager to return. When she tells Charles that she could look after the house, he rudely tells her that, “You can’t even look after yourself.”

Eager to leave Aunt Ida, Maud notices an ad in the local dry-goods store seeking a housekeeper and agrees to work for Everett Lewis (Hawke), an illiterate fish merchant who lives in a tiny 10 by 12 foot house on the outskirts of town, a house without heat or electricity. Here Maud is happy to cook his meals and sleep every night in his bed in the loft, simply because there is no alternative. Lewis, who was raised in an orphanage and whose gruff communication consists of little more than grunts and groans, tells the young woman that his dogs come first in order of their importance to him, then his chickens, then her.

When frustrated, he lashes out not only verbally but physically as well, though the film mercifully only shows one such incident. At age 34, Maud has no place to go and is forced to remain with Everett. Refusing to accept the role of being a martyr, she begins to decorate the walls, doors, and windows of the home and starts to paint birds, flowers, cats, and the landscapes around her.

Things do not really change with Everett, however, until she begins to sell her paintings to Sandra (Kari Matchett, “Covert Affairs” TV series), a summer visitor from New York who falls in love with her post card creations and becomes a good friend. Soon, an article in a local magazine brings further attention to her paintings and she begins to be noticed and accepted in the community, though her work never sold for more than a few dollars and was stashed away by her husband.

As Everett begins to mellow, they marry and Maudie takes on the semblance of a love story, even Aunt Ida admitting that Maud is the only one in the family who seems happy. As she grows older, however, her arthritic pain becomes worse until she can hardly hold a brush. In spite of her growing frailty complicated by emphysema, a result of a lifetime of chain smoking, Maud was still able to express her joy in life through her art, a testament to her inner strength, one that turns a potentially grim story into a life-affirming experience. 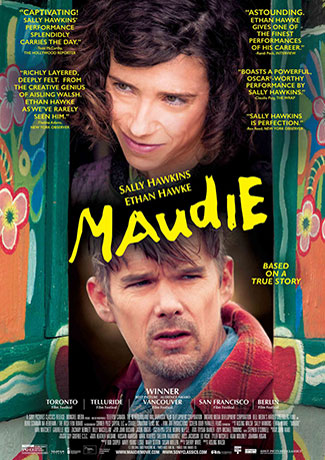