Mike Gan’s Burn joins all those movies that exist solely in one location, movies like “Panic Room,” “Phone Booth” and “Grand Piano.” The greatest challenge with movies like this is that much of its success depends on the main protagonist. They need to carry the movie and compel our attention, since cinematography doesn’t play much of a part working within a limited space. For the most part, Tilda Cobham-Hervey (“Hotel Mumbai”), who plays Melinda, does deliver. Cobham-Harvey communicates the intense loneliness that Melinda feels, stuck in a job as a gas station employee that doesn’t seem very fulfilling. She burns her fingers sometimes by leaving them too long in the pots of coffee she makes, viewing burning as a good thing, since it allows you to feel something. The link to the title here is hard to miss, for as Burn unfolds, we watch Melinda burn herself and others as well, all in the pursuit of feeling less alone.

As we watch Melinda attempt to connect with the customers, and fail miserably, we feel very sorry for her, yet at the same time, recognize the desperation that leaks from her — we would avoid her too if we came into contact. She is treated poorly by her colleague Sheila (Suki Waterhouse, “Pokémon Detective Pikachu”) and has a crush on Officer Liu (Harry Shum Jr., “Crazy Rich Asians”), a policeman who stops by the gas station nearly every night before he does his route. We discover Melinda has been secretly taking pictures of Officer Liu, highlighting her loneliness once again, but also coming across as fairly creepy. This is the constant characterization of Melinda — you feel for her plight yet you worry about your own moral fortitude when you find yourself rooting for her.

Then comes the complication — a man named Billy (Josh Hutcherson, “The Disaster Artist”) enters the gas station and wants to rob it. He feels a bit too nice and polite to be a committing a crime, however, he needs the money because of some trouble he stirred with a biker gang. There is definitely some comedy here as he realizes that there isn’t much to rob because everyone pays with cards nowadays, and Melinda adds on to that by acceding to his request. I guess if a robber asks nicely, then the least you can do is help him rob you.

The conflict emerges when Melinda wants to leave with Billy, and won’t give him the money unless he takes her with him. This is of course asinine, but as we have previously established, there is something off about Melinda, so this development makes sense. In a twist of events, the aggressor becomes the victim, and the victim becomes the aggressor. Melinda is so desperate to feel something she does unspeakable things to Billy — her intent is still unmistakable, but it is horrifying to watch unfold. Once again we, as the audience, are in a moral conundrum because of Melinda. We shouldn’t want her to win, and she shouldn’t win, yet it is clear that the movie bestows her with plot armor, leaving a burning mess and getting away scot-free.

The issue with Burn is that with the exception of Melinda, everyone else feels one dimensional. Billy is the antagonist because the movie says he has to be. Hutcherson also fails to be slick and sinister at the same time. He tells us he has anger issues but it’s hard to buy it. Shum Jr. plays the typical white knight while Waterhouse’s Sheila is that bitch of a colleague we all have at work. Melinda’s motivations, though bonkers, is in line with the portrayal of who she is, the rest are just gathered in convenience to serve the plot.

The movie could have be tighter and more succinct as well, since things get a little snooze-worthy around three quarters of the way in, where they try to amp it up with Sheila’s hapless boyfriend (Shiloh Fernandez, “Evil Dead”) making an appearance. I understand his presence is to highlight Melinda’s lack of connection and how Sheila is always desired over her. But their interaction doesn’t come across as significant, and we are merely waiting for him to leave so that Melinda can begin her plotting. Ultimately, Burn is a movie to watch in the moment and enjoy to some extent, but it’s not one due a revisit — for what would be the point? 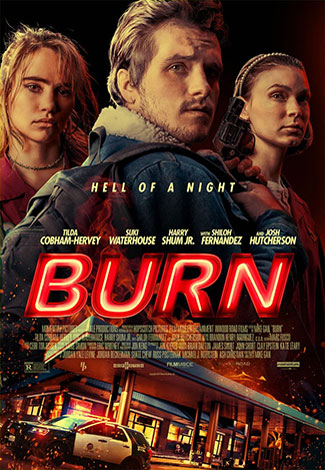