“Do not seek death. Death will find you. But seek the road which makes death a fulfillment.” — Dag Hammarskjöld, Markings

While his reporting sometimes comes across as performance art, journalist Mads Brügger (“The Saint Bernard Syndicate”) has gone beyond satire in his searing documentary Cold Case Hammarskjöld. Winner of the best directing award at Sundance, it is a powerful film that conveys an important and disturbing message about the extent of colonialism and racism in Africa. Described by Brügger as “a project of titanic proportions, full of doubts, questions and moments of desperation,” the film is an inquiry into the death of United Nations Secretary-General Dag Hammarskjöld, killed in a plane crash in 1961 in the British protectorate of Northern Rhodesia (now Zambia) on route to the Congo.

Willing to take on powerful interests in Europe who stood to gain economically from colonialism, the Secretary-General, known in Sweden as “the lord of peace,” was attempting to negotiate a cease-fire between UN forces and the breakaway state of Katanga, widely considered a front for Belgian mining interests. The cause of the crash was attributed to pilot error but is considered by many to have been an assassination. The first part of the film deals with Brügger and Swedish private investigator Göran Björkdahl as they examine the circumstances surrounding the crash.

A cross between Michael Moore and Werner Herzog, Brügger tells us at the outset with tongue-in-cheek that Cold Case Hammarskjöld could either be “the world’s biggest murder mystery or the world’s most idiotic conspiracy theory” (though it may actually be a little of both). Separated into sections announced by yellow stickies plastered on the wall, Brügger dictates his story to two different Congolese secretaries who record it on a vintage typewriter. The two investigators initially discover from photographs that Hammarskjöld’s bloodied corpse had a playing card: The ace of spades, wedged into his collar, which someone tells them is the calling card of the CIA, but that is the last we hear about it.

Ludicrously, Brügger and Björkdahl attempt to dig up the wreckage of the plane with supplies that include two shovels, a metal detector, pith helmets (a symbol of 19th century Western imperialism), and two cigars, ostensibly to celebrate after completing the job, though Björkdahl claims that he does not smoke. Brügger undertakes the project “dressed all in white like some fair bride,” mimicking the appearance of a mysterious man from South Africa later deeply implicated in events. The diggers have to cut the enterprise short, however, because Brügger says that he feels nauseous but it soon dawns on us that we are being played.

The play turns deadly, however, when a man by the name of Keith Maxwell surfaces as the one who ordered Hammarskjöld’s plane to be shot down by a Belgian mercenary. When a video from South Africa’s post- Apartheid Truth and Reconciliation Commission is discovered, we hear about “Operation Celeste,” a nine-page memo detailing plans for executing Hammarskjöld that may or may not be legitimate. On the memo’s letterhead, however, is the name of the South African Institute of Maritime Research (SAIMR). Apparently, Maxwell (said by his wife to be insane) used the organization as a cover to carry out his clandestine mission.

During a period of six years, Brügger and Björkdahl interview former members of SAIMR to little benefit, but are eventually rewarded when they locate a surprisingly talkative witness, Alexander Jones, who claims that SAIMR was a mercenary group supported by the CIA and Britain’s MI6. The story becomes even more chilling when Jones tells the investigators (without any evidence other than his word) that the goal of SAIMR was to eradicate black people in Africa by injecting them with the HIV virus. Though, in a New York Times article by Matt Apuzzo from January 27, 2019, we are told by scientists that this was not possible, the fact that some thought it was desirable is in itself deplorable.

In 2015, the UN reopened the Hammarskjöld investigation and a United Nations panel concluded that there was “persuasive evidence that Hammarskjöld’s aircraft was subjected to some form of attack or threat.” Given what we know about Western involvement in regime change such as the overthrow of Socialist President Miguel Allendé of Chile, Mohammed Mossadegh in Iran, and Jacobo Árbenz in Guatemala, Cold Case Hammarskjöld raises serious doubts about the official story. In discussing the film, Brügger said, “I want the audience to feel: I’ve never seen anything like this before!” My feelings exactly. 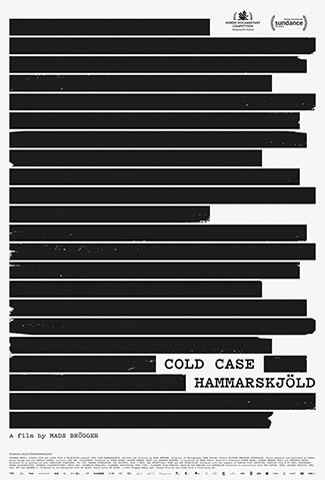