Years ago, during the annual Purge — a 12-hour event held on March 21 during which all crime, including murder, is legal — a teenager survived the brutal slaughter of her entire family. She endured an unimaginable night of terror and torture, and now, as an adult in The Purge: Election Year, Senator Charlie Roan (Elizabeth Mitchell, “Crossing Lines” TV series) has vowed to eliminate the event, created by the New Founding Fathers of America (NFFA for short).

While many see the Purge as a way to support their country and eliminate all negative emotions and urges in their lives, Senator Roan views the lawless night as a way for the NFFA to eliminate the poor population, and during a presidential debate, she urges citizens to stand with her against the Purge, because “the soul of our community is at stake.” The NFFA backs her opponent, Minister Edwidge Owens (Kyle Secor, “The Gates” TV series), and views the Senator as an out-of-control nuisance threatening their way of life. In retaliation for her anti-NFFA campaigning, they decide to revoke all of the privileges high-ranking officials enjoy with each Purge; traditionally considered off-limits to Purgers, Level 10 officials are now fair game, and the NFFA puts into motion their plan to eliminate the loudest and strongest threat to their status quo.

As the night approaches, Roan’s security team, led by former police sergeant Leo Barnes (Frank Grillo, “Captain America: Civil War”), upgrades the barriers and camera systems in her home, keenly aware that she will be a popular target that evening.

Meanwhile, Joe Dixon (Mykelti Williamson, “Forrest Gump”) is preparing to close his deli for the night when he catches two teenage girls shoplifting. Aided by his employee Marcos (Joseph Julian Soria, “Max”) and friend Laney Rucker (Betty Gabriel, “Experimenter”), Joe retrieves the candy from the schoolgirls (Brittany Mirabile and Juani Feliz) before kicking them out of the store. Joe’s day grows worse, however, after his insurance company calls to raise his already unaffordable Purge rates, and he is forced to guard his store that evening from thieves who won’t respect his territory.

As the sirens blare, signaling the beginning of the annual Purge, Joe and Marcos sit atop the deli and watch wearily as a car covered in white Christmas lights approaches their building, Laney rides in a triage van, seeking out those in need, and Barnes keeps Senator Roan in her den as he checks in with the snipers stationed all over her home and watches for approaching Purgers.

As the third installment of its franchise, The Purge: Election Year builds upon the frightening premise introduced in 2013. “The Purge” was a simple home-invasion film, focusing on an affluent man who made his career in home security and had amassed his fortune selling home barricades to wealthy people looking to hunker down during the annual event. The sequel, “The Purge: Anarchy,” was much better received by critics and viewers alike, as the setting was expanded to the streets of Los Angeles and included more characters, both sinister and innocent. The Purge: Election Year takes the next natural step and examines the state of the population and country after the Purge has been in existence for a number of years. Those who are unable to afford high-level security teams and systems are at a higher risk, and the poor are often gathered together as a game in a twisted hunting sport organized by the 1%.

Taking the helm for the third time, writer/director James DeMonaco brings the story full-circle, creating characters on both sides of the economic spectrum who oppose the Purge and want to bring it to an end. In past Purges, people who sought to assist those in need became targets themselves, but now, as evidenced by Laney’s triage van, they are mostly left alone. It seems that if you haven’t offended anyone in particular, and keep inside, you’ll be relatively safe, but who hasn’t offended someone in some way at one time or another?

The Purge: Election Year is a timely incorporation of the haves and have-nots in a battle for basic existence. The true heroes of the film are blue-collar folks who have worked hard for what they have, and are willing to fight to protect it; they’re also the types of people who will protect others in danger. Jabs are thrown in both obvious and subtle ways towards entitled members of society who hold all the cards — or feel superior to others — and there is a twisted sort of joy experienced when seeing these types cut down as the movie progresses. The characters are well-portrayed and well-written, as you truly do root for the safety of the protagonists, whereas the first two films were populated mostly by characters who were expendable filler in loosely tossed-together plots. One notable standout in the film is Brittany Mirabile, whose unnamed character will absolutely leave a strong impression — she’s arguably the most terrifying of all the Purgers for a number of reasons.

The Purge: Election Year is a film that, in many ways, encapsulates what horror is meant to be; it’s a kind of pseudo-meta-catharsis in that the audience expends their negative emotions by watching characters expend theirs. The tension, fear, and occasional elation felt during these films bring us to a pretty dark place, but the most effective horror has always made us face our demons head-on. DeMonaco has brought everything together in a clean cycle with “The Purge” trilogy — from home invasion to anarchy to political righteousness.

Might this be the franchise to finally leave well enough alone? Or will there be a fourth film coming down the pike? In a real-life election year that’s grown to be pretty horrifying itself, it certainly wouldn’t be the most shocking thing to come along in recent years. 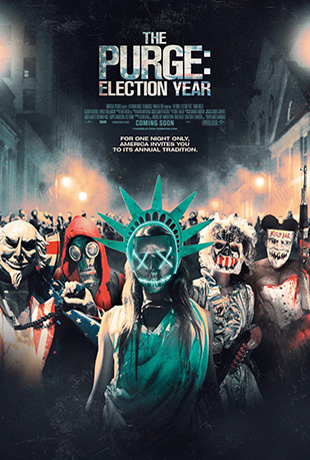