Shakespeare is synonymous with adaptation. His work has produced mutations that continue to adapt to the most dissimilar environments. The bard has shown in the last four hundred years that no matter the medium, the channel, the period, the era, the genre, the generation, the technology, his work keeps fitting all conditions, even the most adverse — even bad adaptations. His work survives because it is the fittest. Those bad adaptations, nonetheless, usually go extinct before we can remember the name of their creators. Something similar happens with Macbeth Unhinged, Angus Macfadyen’s first incursion into the responsibilities lying on the other side of the camera, where he shows to be less fit (which is already saying something) than he is in front of it.

Set at the outskirts of any contemporary city, Macbeth (Macfadyen, “We Bought a Zoo”) is a notable mercenary followed by his always faithful hitman, Banquo (Harry Lennix, “Batman v Superman: Dawn of Justice”). One day, after an execution spree at a wasteland, he’s approached by three bitches, sorry, witches who foretell his and Banquo’s future: Macbeth is about to be promoted, after which he will be king. Banquo will never be king, but he shall father a line of rulers. After receiving this news, Macbeth is summoned by the ostentatious local kingpin with annoying drinking habits, Duncan (Kevin McNally, “The Man Who Knew Infinity”), and is invited to get into his limo. He’s about to get a promotion. Maybe’s time to consider the witches’ words wise as they may be. Macbeth will not get out of the limo again. Tempted by his ambitious and cunning Lady (Taylor Roberts, “Admissions”), Macbeth kills the kingpin, only to get involved in a murderous trail that is fated to end in disaster. You know, the common story of a frail ego tempted by bitches babbling bout bright hereafters and subtly forced by lovers lustfully linking life with power.

So here’s another take on this tragic tale, yet again paralleling Shakespeare’s parables on power with the corporate world and the corporate world once again portrayed within the confines of a limousine. On the first parallel, I can think of as a notable example Aki Kaurismäki’s dead-pan take on Hamlet in his human yet cynical “Hamlet Goes Business.” On the second one, I am thinking on a more recent film, one of David Cronenberg’s most ambitious and less accomplished projects, his adaptation of Don DeLillo’s “Cosmopolis.” This latter film demonstrates how an originally claustrophobic environment can quickly morph into an unbearably uninteresting one — how claustrophobia can always become catatonia out of sheer boredom. And this happened to Cronenberg even though he had a very well-set tone respecting DeLillo’s jazzy-suave undertones and syncopated phrasing . . . though then again, we have to watch Robert Pattinson going from medium shots to close ups, talking to the camera for more than two hours, which can be more than an average viewer can bear, particularly if the viewer is not into mental masturbation — and even if the viewer is, they are likely disappointed, as the actor(?) keeps his shirt (and three-piece suit) the whole time. Probably this is what happened to the other two people that were at the theater the day I went to watch this film and left not having passed the first act. By the end of the movie, even the projector had gone asleep.

But I digress. It may be because I don’t have much to say about Macbeth Unhinged, for I have learned to say few when nothing good is to be said — and nothing good to say I have. My point before was that this kind of ‘claustrophobic’ environment can result in impactful metaphors (i.e., for narcissism, for isolation, for cowardice . . . for all those features for which Macbeth — or the prototypical Wall Street broker — is well-known) yet they tend to wear out quite quickly. To keep them going, you need insightful performances, a dynamic work with actors, an imaginative use of the camera, of space and angles, a superb production design, an accurate sense of editing, among other things I may be forgetting right now (not that there are many examples to draw from), all these combined with a supreme use of silence — all of which Macfadyen’s feature lacks, with a particular emphasis on the last point.

One of the film’s greatest flaws is its supreme indecisiveness: The recitation is as disparate and pitchless as the score that accompanies (and competes with) three quarters of the actors’ lines; the delivery is as dull as the ubiquitous dagger with which Macbeth stabs Duncan and as unexpressive as the cast’s shadows, which we are led to believe are their faces . . . for the performances are as tone-deaf as the film’s aesthetic sense — it is impossible not to consider at some point whether the use of black and white is the result of yet another pedantic whim. It is all hidden, however, behind the label of ‘experimental’; with what exactly it is experimenting though is still unclear. Aesthetically, all the film does is to aimlessly and arbitrarily point at references, a technique with which the French New Wave, mainly Jean-Luc Godard, found some prominence. But unlike the French filmmaker, who (occasionally) knew perfectly well with what he was experimenting, and used self-referentiality as a filmic artform, the only thing left in Macbeth Unhinged is an overuse of free association through the use of a digressive camera and clunky vintage editing techniques (somewhat innovative in the 1960’s). Macfadyen’s take on “Breathless” leaves us “Yawnful.”

It is maybe appropriate (if unwittingly) that the film’s metaphors are so motley and, ultimately, pointless, since this is the tale of a man who dug his own grave in his inability to understand metaphors. Macbeth was a man who failed to know that fate is always cryptically spoken, that prophecies always speak in tongues, that the future comes in coded and encoded talks. As all assholes in history, power-hungry assholes I mean, Macbeth’s greatest fault was his lack of imagination. Everything he takes literally, and thus becomes the victim of his own literalization.

I don’t know why, I must confess at some point, perhaps to avoid falling asleep, I couldn’t help to think on that other, contemporary Lady M, the one that may be trumping over the White House with such a similar character by the hand — and almost a smile came to my face, perversely so I must accept, as I imagined her trying to clean imaginary stains of crimson out of her hands and the carpet on the Oval Office while her husband is skeptically seeking and fearing the forest approaching the castle as though the mountain could approach Muhammed, reversing the parable, and awaiting to be killed by a man of no woman born. That motherfucker.

But I digress, again. I know about the movie I have said few, and I think less I had to say. The tale is one of a frail character who falls apart with criticism and a weak (wicked) soul that gets high on flattery. Here’s my hope that this is not the director’s case. His “The Critic” I’ve seen, and how much would I hate to see such ugly fate. 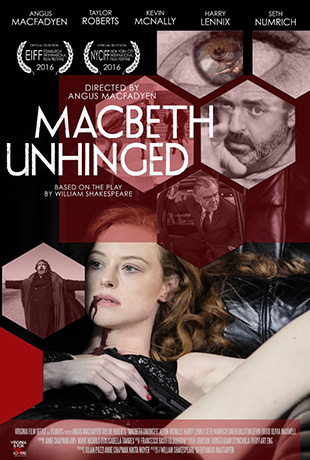