With The Legend of Tarzan, Tarzan meets the cast of “Planet of the Apes” and no one comes out looking good.

To this reporter’s count, there have been more than 30 screen adaptations of the semi-classic Edgar Rice Burroughs tale of “Tarzan, King of the Apes,” from the first appearance in 1918 (with silent star Elmo Lincoln) to the Johnny Weissmüller favorites of the 1930s and ’40s to the 1967-68 television series with Ron Ely to the 1999 animated film from Disney.

And, among all of the actors who portrayed Lord Greystoke, I would have put money down that non-talents like Ely, Christopher Lambert (“Greystoke: The Legend of Tarzan, Lord of the Apes,” which ironically nabbed a Best Supping Actor nomination for the late Ralph Richardson), Miles O’Keeffe (“Tarzan, the Ape Man”) and Casper Van Dien (“Tarzan and the Lost City”) would have to be considered the worst. However, I now amend that thought and place Alexander Skarsgård at the top of that infamous list. The very top. In fact, a real simian would have done a much better job in the role.

Skarsgård, who most recently appeared in the decent production of “The War On Everyone,” here, simply cannot wait to strip out of his Victorian attire and put on the loin cloth as quickly as possible. He looks good in it, don’t get me wrong, and there is certainly no sin in that for most movie stars, but when the surrounding characters are even less interesting (or attractive, including a wise-cracking, Jane, Margot Robbie, “Focus” and to appear in the upcoming “Suicide Squad” as “Harley Quinn”), then viewers have a real problem.

Even the inclusion of Academy Award nominees Samuel L. Jackson (fresh off of “The Hateful Eight” and now a comic relief buffoon) and Djimon Hounsou (“Furious 7”) as well as two-time winner Christoph Waltz (another Quentin Tarantino alum, in his most unappealing performance since “The Green Hornet”) does nothing for this version. Yes, Jackson, as George Washington Williams, an emissary of the Benjamin Harrison administration, gets to fire off a few 19th century curse words as well as a Gatling gun; while Waltz tries to chew as much out of the script as possible. But with modern lines like, “We’re screwed,” and “Are you through with your peep show (pretty sure they did not have such events in 1890),” and a reference to Williams licking the genitalia of a mountain gorilla, along with a political-correct, environmental-friendly and a definite post-modern animal-centric slant (blame Adam Cozad, “Jack Ryan: Shadow Recruit” and Craig Brewer, “Black Snake Moan”), there is not one enjoyable aspect of this latest production directed by David Yates (the upcoming “Fantastic Beasts and Where to Find Them,” along with the last four of the “Harry Potter” films, although ANYONE could have helmed those at that point in the series).

All right, let’s get to the plot of The Legend of Tarzan, what there is of it. Evidently, in late 1888, the European countries decided to carve up the African Congo and take advantage of its rich source of natural resources and rices, including gold and diamonds. This part of the story is true, as Western powers, especially Great Britain, exploited African, South American, Asian and other cultures whenever possible.

Here, however, Belgium gets the black eye as an unseen King Leopold sends lackey Leon Rom (Waltz) to do his dirty work, which included continuing the slave trade and to imprison hundreds of Congolese to toil on the country’s rail system. The bad guy’s secret weapon — a deadly Rosary (don’t ask).

I have probably explained to much for a nit-wit film like this, but Williams seeks Greystoke/Tarzan to investigate, while third wheel Jane insists on coming along. Of course, the idiot is immediately captured, forcing Tarzan, Williams and the audience to go on an hour-long excursion to free her and we feel every inch of that sojourn.

Meanwhile, the T-Man is having flashbacks to remind us just how he became the Lord of the Jungle, being adopted by gorillas who take him in after killing his parents; and how he learns to channel the spirit of the animals — which is great because when Skarsgård tries to utter any human dialogue, it’s a disaster. As he follows the slow boat to the Congo to rescue the unnecessary Jane character (swinging from mile-high vines, jumping off cliffs that would lead to sure death for anyone else and swimming in hippo and crocodile-infested waters, he still has time to visit his primate “brother” and get his ass kicked).

The pacing of The Legend of Tarzan at this point becomes absolutely abysmal and another ridiculous subplot is introduced in with a great warrior chief (Hounsou) — leading a tribe of Terry Crewes painted white — wanting revenge for a son that Tarzan killed for the murder of his gorilla “step-mother,” or something like that. To drive home the point that Rom’s mercenaries are truly evil, the script has them turning into employees of the Cincinnati Zoo as they slaughter Tarzan’s gorilla “family” at will. It’s all completely as ludicrous as it is pointless, but the finale, where a Belgian fort and city are wiped out by a stampede of water buffalo (with Tarzan actually riding one of the animals) is stupefying beyond any conceivable measure and makes the wildebeest scene in “The Lion King” look amazingly lifelike. 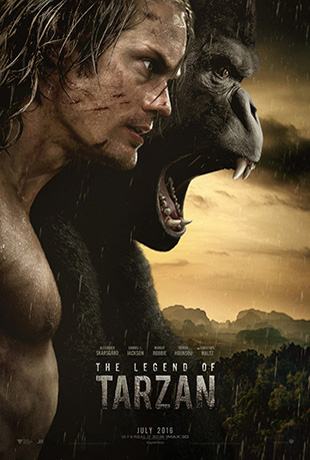