What is it about “Movie-That-Never-Was” stories that endlessly fascinate us? You’d think we’re better off not knowing what could have been. From “Lost in La Mancha” to “Jodorowsky’s Dune” there’s always that stinging compulsion to know what sank the ship. And given the continually escalating popularity of the superhero genre, I find it appropriate to shine a light at Jon Schnepp’s latest project, The Death of “Superman Lives”: What Happened?.

The aforementioned “Superman Lives” was the failed endeavor by Warner Bros. to produce a Tim Burton helmed Superman film with Nicolas Cage as the titular character. The documentary bounces back and forth between varying writers, one of them being Kevin Smith, who recounts one of the film’s more entertaining backstories. Set designers and other hands responsible for the failed project are also accounted for. Not to mention the inevitable discontent between filmmakers.

What strikes me about the behind-the-scenes drama is the evident lack of vision, or at least a singular goal. When I first saw The Death of “Superman Lives”: What Happened?, I thought it was a fault of how the documentary presented the subject, as I didn’t get a clear sense of what this film was actually meant to be about aside from elements pulled from the source material. What I realize is that there may not have been a clear story to begin with. Or at the very least, one that everyone could agree with. It’s abundant with concepts, but no one seems to have a clear idea as to what the exact beginning, middle and end of the narrative was meant to be.

What we do know is that this film was going to center around the death and rebirth of Superman (symbolically reinventing him for a new age) and he was set to face off against an insect-like Brainiac. The film has no shortage of concept art for either. But what’s interesting is that the actor chosen to play the part was Nicolas Cage, and the film even goes so far as to ask convention goers and fans what their opinion on the matter is. It’s a mixed response to say the least.

In an age of growing saturation with the superhero genre, it’s fascinating to see where this might’ve gone, had it been completed. It might’ve at that, had it not been for an unforeseen ripple at Warner Bros., which the film goes into more detail about. It demonstrates the true fragility of film, and the complicated network of a studio project when a lot is riding on it. Ideas from Superman fighting polar bears to Superman being encased in an intricate chrysalis which bonds to his person as his freshly revitalized body and costume, to a Brainiac suspended on mechanical spider legs as potentially played by Christopher Walken. I know. What?

The struggle with reviewing documentaries is that it’s hard how to judge it, in the same way certain biopics are. Should you stick with what’s accurate to real-life accounts and scrutinize research? In this case, no. The Death of “Superman Lives”: What Happened? makes no effort to hide discourse among its peers. The film almost seemed dead on arrival. Filmmaking is a collaborative process, and beyond the initial “wouldn’t a Tim Burton Superman movie be cool” pitch, reports are contradictory.

All I see with “Superman Lives” is ideas. A fever dream of interesting visuals and broad concepts and abstract rebirth metaphors. Putting aside my roots in the comics and how I perceive Superman should be or more accurately, want him to be adapted to film, I find myself wanting to see the movie. I imagine it to be a visual spectacle encased in a narrative mess, not unlike “Batman Returns,” to be honest.

The documentary manages to be welcoming to non-fans, but if you’re in the cult, I’d say you’d enjoy this a lot more. I’ve been curious about this film for at least half a decade, so I was ecstatic to find Jon Schnepp was doing a Kickstarter for it, so I’m notably more attached. I’d say if you’re curious about how much work can be put into a film for nothing, and how easy it is to lose track of a collaborative process, The Death of “Superman Lives”: What Happened? is an interesting time. I’ll leave some of the more harrowing details to your own viewing. It’s a lot to take in, but worth the experience. 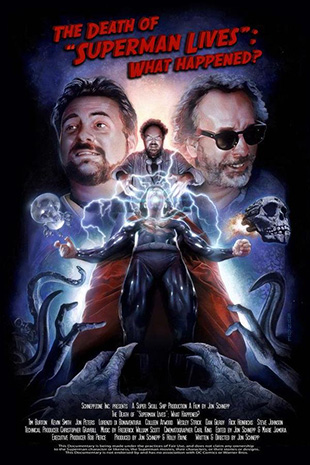