The dog days of the summer schlockbusters are upon us and soon we will be inundated with mediocre and below average films such as the new “Ghostbusters,” another “Ice Age” installment and the dismal “Mike and Dave Need Wedding Dates,” among others.

Trying to fight this deluge, though, is the animated feature from Universal Pictures and Illumination Entertainment (the group that brought us “Minions,” in fact, there is a fun little Minions short preceding this movie), The Secret Life of Pets, co-directed by Yarrow Cheney and Chris Renaud (“Despicable Me,” “Despicable Me 2” and who is also a voice of one of the characters, Norman the Guinea Pig).

Unlike some pictures, the title gives the plot of this one away instantly, as the story is basically what pets do while their owners are away. Of these various dogs, cats, birds, fish, rabbits, reptiles, rodents, etc., some engage in rather mundane activities such as sitting and waiting, looking out the window and sleeping. A few more adventurous critters, however, prefer to play video games, eat food from the refrigerator, throw parties or listen to head-banging heavy metal music. To each their own.

The Secret Life of Pets centers on a small terrier named Max (voice of Louis C.K., “Louie” TV series), who has had a wonderful life with his owner, Katie (voice of Ellie Kemper, “Bridesmaids”). The two share a small apartment in New York City and day after day, when Katie goes to work, Max sits faithfully by the door awaiting her return and blissfully unaware that he himself is the object of the affections of another small canine, Gidget (voice of Jenny Slate who was also the voice of the Assistant Mayor in “Zootopia”).

This life is abruptly ended, however, when Katie brings home the large and slovenly Duke (voice of Eric Stonestreet, “Modern Family” TV series). Neither likes the other and it soon becomes a battle of wills and wits as to who will stay and who may go. During this conflict, while on a walk in Central Park, both are captured by a pair of goofy Animal Control officers (Animal Control officers are ALWAYS goofy in these kinds of movies).

They are soon, broken out, though, by a streetwise bunny, Snowball (voice of Kevin Hart, “Get Hard”), and taken through the NYC sewer system.

Snowball, it seems, is a former magician’s assistant and the fanatical leader of the Flushed Pets, a varied group of animals — including a tattooed pig and a hairless cat — abandoned by their owners after a short time (and while there WAS an alligator amongst this menagerie, I was disappointed that it was NOT an albino).

Meanwhile, Gidget discovers that Max has not come home from his walk and she and the others, including Tweety the Parakeet, Chloe the Fat Cat (voice of Lake Bell, “No Strings Attached”), a massage-loving dachshund, Buddy (voice of Hannibal Buress, “The Nice Guys”), and Tiberius the Hawk (voice of Academy Award-nominated Albert Brooks who also voiced Marlin in “Find Dory”), enlist the help of a broken-down old Bassett hound called Pops (voice of former SNL cast member Dana Carvey doing his grumpy old man impersonation) to find their friend.

The search leads through the depths of the sewers to the heights of the city’s tallest structures to a side trip to Brooklyn to a ride on the Staten Island Ferry to a surrealistic visit to a sausage factory (easily the funniest segment of the production) and concludes — once again — with a battle between Animal Control and our heroes.

The animation of The Secret Life of Pets is often zany and vibrant (the city scenes are especially lifelike in many cases), while the dialogue (courtesy of Cinco Paul, Ken Daurio and Brian Lynch), like the lines in “Angry Birds,” will keep parents awake long enough for the little ones to enjoy the silly 90-minute ride.

There isn’t a whole lot else going on, so don’t expect the social commentary or deep emotional impact of a Pixar film. The Secret Life of Pets is a non-threatening entry into the seasonal foray, but is better than most of the efforts we can expect. Made mostly for pets owners (who probably see much of the movie in them), the picture kind of sits and wait for the audience to react, just like their beloved creatures often do. 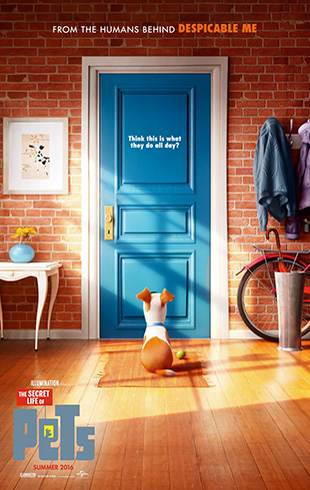