The chasm between what parents want for their children and what kids want for themselves is rarely addressed in films, especially in romantic comedies where the focus is primarily on young couples falling in and out of love and then back in again. Of course, we know that parents are usually involved, especially immigrant families where adherence to tradition may come before their children’s wishes. Based on the actual courtship of Kumail Nanjiani and his wife Emily V. Gordon, Michael Showalter’s (“Hello, My Name Is Doris”) bittersweet comedy, The Big Sick is an exception, focusing on the influence of a Pakistani family on the life choices of their son Kumail (Nanjiani, “Fist Fight”) especially his relationship with his Caucasian girl friend, Emily (Zoe Kazan, “Ruby Sparks”).

The film sounds weighty especially if you add in Emily’s life-threatening illness, but it is primarily a comedy and a very funny one at that, even if the humor is so deadpan that you often have to listen very closely to appreciate it. In the film, Kumail is a stand-up comedian as well as a part-time Uber driver who is determined to live his own life even if he has to thwart his family’s wishes for him, especially those of his mother (Zenobia Shroff, “When Harry Tries to Marry”) who wants him to become a lawyer, adhere to the family religion, and participate in an arranged marriage to a Pakistani girl. When a “woo-hoo” from the audience interrupts one of Kumail’s “big shtick” comic routines, the comic informs the heckler that any interruption, positive or negative, is considered heckling.

Finding out that the heckler is an attractive blond graduate student in psychology, Kumail engages her in conversation after the show which, of course, is continued back in his small apartment. They decide, however, that they will not see each other again, but are continually drawn together until five months of dating has passed. Unfortunately, the budding relationship comes to a screeching halt when Emily finds Kumail’s hidden pictures of prospective Pakistani brides and realizes that he has never told her about his family’s marriage plans for him, nor even mentioned her to his mom. She questions his commitment, even when Kumail explains his dilemma of marrying outside his religion which would cause him to lose his family.

The relationship has to be put on the back burner, however, when Emily is rushed to the hospital with a mysterious lung infection. A worried Kumail shows up at the hospital and, pretending to be her husband, approves putting her in a medically-induced coma to fight the spreading infection. The film’s focus soon becomes the connection between Kumail and Emily’s parents Terry (Ray Romano, “Ice Age: Collision Course”) and Beth (Holly Hunter, “Batman v Superman: Dawn of Justice”), who have come from North Carolina to be with their daughter. Aware of Kumail’s deception about his family, they tell him that he does not have to stay, but he persists and they gradually warm to each other, opening up about their problems.

One of the best comedic moments of the film happens when Terry incongruously asks Kumail how he feels about the 9/11 attacks and his response will keep you laughing. As Kumail goes back and forth to the hospital, the conflicts that emerge between Kumail, Emily, and her parents, while serious, do not affect the film’s sense of humor, but add depth and sincerity to the characters. Underneath the medical emergency and the family conflicts, however, The Big Sick is a sweet romance about two likable people whom we root for to overcome their resistance and draw closer. While it is a comedy, it is not afraid to confront the complexities involved in an interracial relationship, and serve as a persuasive rebuttal to the Islamophobia present in today’s political culture. 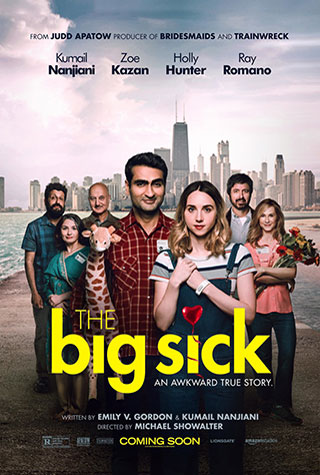