I don’t know, but I suspect the following conversation may have taken place between the writers of Fist Fight — Van Robichaux, Evan Susser and Max Greenfield — as they were scribbling their ideas down.

Van: Remember, guys, we need to set the record for the number of F-words in this script.
Evan: Yes. Almost every other word, in my opinion. I want to break the “Goodfellas” mark.
Max: Yes, and to make things even better, let’s have a little 9-year old girl spout the F-word during a rap song over and over and over and over again. THAT will really bring the parents in.

OK, I know I’m exaggerating and paraphrasing here (for instance, I’m sure they did not use the term, “F-word”), but the point is just the same.

The word can be a noun, a verb, an adjective, a pejorative, an invective, an acronym and many other things. One thing it is NOT, however, is FUNNY (especially when used constantly), unless you are a 12-year old boy, but as previously written Van, Evan and Max evidently do not agree with me.

Anyway, enough of the editorial comments, let’s get to the plot of this Richie Keen directed barrel of laughs. Andy Campbell (Charlie Day, “Pacific Rim,” but best known for his role in “It’s Always Sunny in Philadelphia” TV series) is a weak, spineless, gutless teacher at an inner city school, who is disrespected by fellow colleagues and ridiculed by the mostly slacker students.

Yes, these pupils may lack discipline, but they seem to have the money and the means to steal a horse from a racetrack (and load him up with crystal meth), paint and vandalize the principal’s (Dean Norris, “Secret in Their Eyes”) automobile (and actually haul it up to his office), break into every room, closet, trophy case and crevice and do untold damage which would literally cost hundreds of thousands of dollars. It’s an updated version of Morgan Freeman’s 1989 vehicle, “Lean on Me,” but without the wit, charm and laughs.

In the midst of these side-splitting, extra-curricular activities, Andy inadvertently spills the beans on fellow teacher, Ron Strickland (Ice Cube, née O’Shea Jackson, “Ride Along 2”), an uber-violent, borderline psychopath who uses a fireman’s axe to terrorize a student (Austin Zajur, “Delinquent”) and smash his desk into splinters. The faux pas apparently causes Strickland to go even more crazy than he normal behaves and challenge Campbell to a fist fight (hey, we’ve got a title!) after school.

This is supposed to be very frightening because a) Ice Cube is a mean-looking really tough bully and b) Charlie Day is a complete wimp (and, psst, he’s white, which equals weak in today’s society). Plus, since this movie attempts to capitalize on current technology, everyone (and I mean EVERYONE) in the school, as well as the entire city, knows about the conflict via Twitter, Facebook, their iPhones and every other form of 21st century communications available.

During some of these scenes, the comedy is quite effective as other teachers, including drug and sex-crazed guidance counselor Holly (Jillian Bell, “22 Jump Street”) and addled Coach Crawford (Tracy Morgan, “Cop Out”) feel it’s their duty to give the weakling some sage advice (running, begging and hiding drugs in Strickland’s classroom). Unfortunately, these are the only true chuckles Fist Fight produces as Keen continues to build the fear in Campbell’s mind, which works for a while, until everything just spirals out of control.

This downward spiral, I should mention also involves Campbell’s daughter, Ally (Alexa Nisenson, “Middle School: The Worst Years of My Life”), participating in a “talent show” in which the youngster spouts a profanity-laced rap “song” that not only embarrassed this reporter (who has two younger daughters), but also shames her entire gender, to boot. This, however, seems to make her the most popular child at her elementary school, so everything turns out for the best because the barometer of a young child’s popularity is his or her’s ability to degrade themselves and their families for years to come . . .

In addition to the endless vulgarity, fights, drugs, violence and all of the other things going on, Campbell’s pregnant wife Maggie (JoAnna Garcia Swisher, “The Internship”) gives birth after the concluding events so all ends “well.” Then, of course, we get a huge message on how far the nation’s public school system has fallen (after 91 minutes of the most ludicrous situations one can fathom), yet all of the teachers in this film are somehow actually worthy of continued employment.

While an interesting enough premise, the comedy of Fist Fight fades well before the second half and everyone performs as one-note cartoon caricatures. I did not expect too much from Ice Cube (who was funnier as a member of NWA and STILL has to answer for the two fiascos, “Are We There Yet?” and “Are We Done Yet?”), but was fairly disappointed in Day’s performance, considering he is one of the more humorous actors working today. And while he gets a few decent early snickers, the sheer volume of stupidity overwhelms even his charismatic presence and, like a real punch to the stomach, the overall effect leaves one dizzy, nauseous and gasping for air. 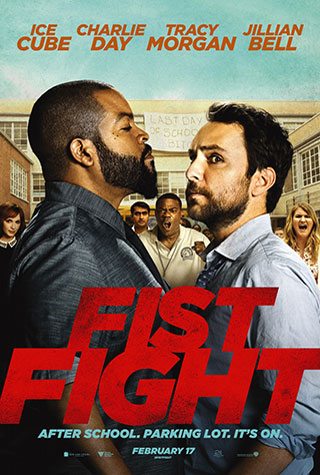