Emad Etesami (Shahab Hosseini, “About Elly”) and his wife Rana (Taraneh Alidoosti, “The Wedlock”), a childless married couple in their early thirties, are amateur actors playing the lead roles in a local production of Arthur Miller’s “Death of a Salesman,” a play in which a good man’s virtue turns to hypocrisy and his marriage crumbles. Like Willy and Linda in Miller’s play, the husband and wife in Asghar Farhadi’s (“A Separation”) Oscar-nominated film The Salesman (Forushande) talk to each other, but it is always seemingly behind a veil until unforeseen events uncover buried aspects of each one’s character that blurs the dividing line between the theater and real life.

As well as being an actor, Emad is a high school literature teacher respected by his students who is first seen in a classroom discussion about the short story “The Cow” by Gholem-Hossein Sa’edi, an Iranian writer and political activist. When one of the students asks Emad, “How does a man become a cow?” Emad replies, “Gradually,” little realizing that his answer would become prophetic. The scene then suddenly shifts to a suburban apartment where Emad and Rana are seen running with other residents to escape the building’s crumbling facade. In a politically-sounding exchange that somehow eluded the censors, Emad says, “We ought to take a bulldozer, knock this whole thing down and start over,” whereas a neighbor tells him, “We already did that and this is what we got.”

Fortunately, their stage manager Babak (Babak Karimi, “The Past”) helps the young couple find a vacant two-bedroom apartment on the top floor of a building, but fails to tell them that the previous occupant, who has left most of her belongings behind, was a prostitute, described euphemistically in the film as “a woman of many acquaintances.” When Emad is out one night, Rana lets a stranger into their apartment thinking it’s her husband, and is assaulted in the shower. The incident takes place off-camera and the exact nature of the attack is never made clear. The event, however, puts a strain on their marriage. Like Willy Loman who is unable to give his wife and family the good things in life, Emad wonders why he was unable to protect his wife from assault and becomes irritated with her fear of being alone, a situation that disrupts his teaching schedule and, in one instance when she agrees to perform, causes him to cancel a performance of the play in the middle because of her breakdown.

Speculating that his wife was attacked by a former client of the previous tenant, Emad does not report the incident to the police but takes it upon himself to track down the perpetrator using such clues as a cell phone, set of keys, and a pickup truck which the attacker carelessly left on their street. Determined to seek revenge and unwilling to see events from Rana’s perspective, he berates her for letting a stranger into their apartment. When her feelings are marginalized, the film becomes more about the treatment of women than about what happened or who committed the crime, revealing how a man’s anger, bruised ego, and disdain for his wife’s feelings threaten the very thing he is striving to protect.

To Farhadi, the key to understanding the film is empathy. “When you try to make your movie as close as possible to real life, you give the audience the opportunity to watch it from different aspects. I’m always working towards empathy,” he says, “even with the characters that do wrong. The films where characters are heroic and do lots of great things are satisfying and comfortable to audiences. But I want audiences to put themselves in the shoes of characters who have done something wrong.” Regardless of whose point of view you ultimately sympathize with, The Salesman is a powerful and brilliantly executed film about revenge and its consequences that enhances Farhadi’s reputation as one of the most important filmmakers of our time. 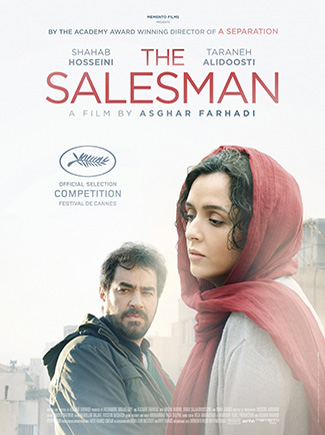