Mathematics and mathematicians may not appear to be the most dramatic material. Filmmakers seem aware of this potential failing, and thus produce subtle, nuanced and often very impressive films based around this topic, which end up being award contenders. Such is the case with Hidden Figures, for in the tradition of (Oscar winners) “Good Will Hunting” and “A Beautiful Mind,” Theodore Melfi’s tale of African American women working at NASA in the 1960s is a heartwarming story of oppressed people who triumph over adversity through the power of numbers, who go from being hidden figures to pioneering leaders.

Whereas the other films mentioned feature white men dealing with the adversity of social class and mental illness, Hidden Figures features the double whammy of race and gender, as the three protagonists Katherine G. Johnson (Taraji P. Henson, “Larry Crowne”), Dorothy Vaughan (Octavia Spencer, “Allegiant”) and Mary Jackson (Janelle Monáe, “Moonlight”) repeatedly encounter prejudices against both women and black people. All three work in the NASA space program, as “computers,” the name given to staff that perform manual calculations for the engineering and flight sections. Dorothy does the work of a supervisor, but when she pursues actual promotion, her superior Vivian Mitchell (Kirsten Dunst, “Midnight Special”) repeatedly denies her. Mary investigates a transfer to the engineering section, but needs college courses that are only taught at a “whites only” school. And math prodigy Katherine, whose gift is displayed in a pre-title sequence, is assigned the role of computer for the Space Task Force under Al Harrison (Kevin Costner, “Man of Steel”), where she must check the calculations of her white male colleagues, including Paul Stafford (Jim Parsons, “The Big Bang Theory” TV series), who assume they naturally know better.

Such a set-up could run the risk of being a tedious diatribe against prejudice, especially as there are two major societal attitudes present here. Melfi and co-screenwriter Allison Schroeder avoid this pitfall by presenting the prejudices that the women encounter as deeply institutionalized. Rather than thugs or outright aggression, as seen in “A United Kingdom” and “Loving,” the depiction of racism in Hidden Figures is subtle but pervasive. A police officer is suspicious of three black women travelling alone; Dorothy and her children are expelled from the public library for visiting the white section; Katherine must run across the NASA complex to find a “colored bathroom” and her colleagues object to her using the same coffee urn as them. The viewer may well find themselves angered by these historical instances of segregation, but tellingly the characters themselves take it in their stride. Dorothy takes the library book that she requires, arguing (privately) that her tax dollars paid for it. Mary petitions the court to allow her to take the requisite courses, and Katherine declares the difficulties of her working conditions in one of the film’s few grandstanding moments.

For the most part, Melfi opts for a reserved and often lightly humorous touch. This is partly due to the absurdity of the institutionalized racism and sexism, and also down to the warmth and affection the film holds for its characters and that they have for each other. The African American community that Dorothy, Mary and Katherine belong to includes their families and a supportive church congregation, and a potential suitor for the widowed Katherine in the form of Colonel Jim Johnson (Mahershala Ali, “The Hunger Games: Mockingjay – Part 2”). The film’s careful depiction of communal scenes, such as church luncheons and gatherings around TV sets to watch President Kennedy’s speeches or, crucially, space launches, illustrates the broader social context of the three protagonists, their home lives as well as their work lives, and the ways in which one influences the other. The three women are shown to be attentive mothers and loving wives, and the minor presence of Mary and Dorothy’s husbands helps to emphasize the importance of these women’s stories and their relationships with each other.

Scenes featuring the protagonists are charming and amusing in terms of the banter between the three women, and have some incongruous images such as the well-dressed Dorothy inspecting the underside of a car. Perhaps the very incongruity of this image is indicative of this reviewer’s own prejudice, as I am used to seeing men in overalls performing this task. Similarly, there is a scene when a white character in shirt and tie (literally) takes a crowbar to a sign of segregation, an image more commonly associated with black characters in more working class attire. So the film not only challenges the prejudices of the time, but also those of the viewer as, if we are frank and honest, prejudice and oppression due to gender and race remain prevalent and pervasive even today.

The greatest strength of Hidden Figures is that the three heroines (in both senses of the word) make their challenge through the strength and application of their intelligence and knowledge. Katherine proves herself more than the equal of her male counterparts, performing complex equations both on paper and, in two bravura sequences, chalkboards that has the surrounding men gazing in fascination. Mary may take inspiration from Karl Zielinski (Olek Krupa, “Burn After Reading”), a Polish Jew in the engineering team, but she acquits herself admirably in court and draws attention to the significance of those who are the first to break social barriers. Most subtly and impressively, Dorothy teaches herself computing language as NASA brings in an enormous IBM to perform the necessary calculations, which proves beyond the skills of the existing team.

The transition from human to technological computing illustrates the march of history, which these women also represent as they force change and make progress, both for themselves, their gender and their race. The recognition that they receive from white male co-workers, including Harrison and astronaut John Glenn (Glen Powell, “The Expendables 3”), is not only well-deserved but triumphant and may prompt the viewer to applaud and punch the air, while the anxious watching of space missions at Mission Control is nerve-wrackingly reminiscent of “Apollo 13.” The poster for Hidden Figures echoes that of “The Right Stuff,” and for storytelling that interweaves the personal and the historical, creates an evocative sense of time and place and features winning performances from all concerned, Melfi’s film most certainly offers stuff that is right. 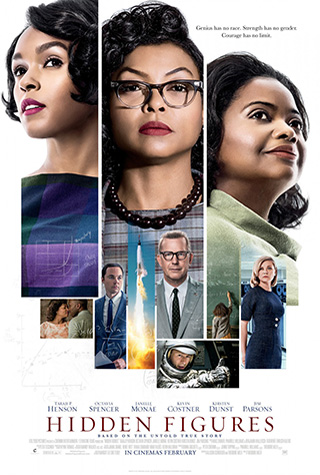