Directed by Nick McAnulty and Brian Allan Stewart, this found footage shocker, Capture Kill Release, seems like a natural progression in the tradition of films such as “The Honeymoon Killers” and “Henry: Portrait of a Serial Killer.” Combining strong performances, a wicked script, and an appropriately dreadful atmosphere, it’s a worthwhile entry into a sub-genre susceptible to some of the least appealing impulses of modern horror.

Jen (Jennifer Fraser) has bought a new digital camera, which she uses to playfully bug her husband, Farhang (Farhang Ghajar, “Something to Hide”). They’re a pair of hip suburban professionals. He’s deadpan and she’s a manic pixie. But suffice to say, she’s no dream girl.

They head to the DIY store to pick up tools and they chat and bicker like couples do, and make jokes about killing someone and how to drain their blood and dispose of the body. Oh, the LOLs. Except we quickly realize that they’re not joking. They discuss potential victims in the car. He won’t do women in case it looks like a “sex thing.” She won’t kill the mentally disabled because the victim should be fully aware of what’s happening. Are they really going to do this? They seem awfully calm and indifferent.

And there’s the heart of the film’s success: The juxtaposition between the mundane practicality and everyday cheerfulness of the couple (“Red is definitely your color!”), and the vicious brutality of their intentions and their crime. It’s a simple and unsettling binary, sufficient to maintain a horrible tension across the full 96 minutes.

The ordinariness extends to the past, as well. At various moments scenes are intercut from a home video in the 1980s. It’s Jen as a toddler. We scour the footage for some trauma or abuse, but we find nothing. We reach for a reason — some tipping point or trigger — to explain the viciousness of the adult. But we can only explain Jen’s jolliness: It was a conspicuously normal upbringing. It leaves us with a memorable movie monster: Energetic and friendly and socially functioning, whose homicidal urges are as everyday as housekeeping.

The foundation of depicting watchable reprehensible characters is good writing. One becomes frustrated by Farhang’s inability to stand up to Jen not simply because we want the project to cease, but because we see him as weak. We see him as she sees him. He’s a pushover; but we can see how he’s pushed because her manipulations are so sophisticated. She minimizes the monstrous through quips and seduction; and she distracts from the inhumanity with injections of humanity, insisting on using the victim’s name because they’re human after all.

Likewise, the film is structured specifically to manipulate the audience. Jen practices murder on an animal (a half-nod to “Re-Animator”) before choosing their first victim. And we’re introduced to a total sleazebag who’s perfect to star in her movie. But no, that would be too easy. It would engender too much sympathy with the killers. Their choice, instead, maximizes the agony and underlines the indifference. An executioner without a judge (and a feeble jury in Farhang) means no one is safe and death is arbitrary.

The gore is unflinching, but not lovingly lingered upon. There’s a forensic practicality about it that borders on instructive. McAnulty and Stewart know that we live in unshockable times — it is, after all, embedded in the very worldview of their antihero. So what disturbs most is not the gory dismemberment, but the fact that it is interrupted by a knock at the door, and we’re left watching Farhang’s face as he listens through headphones to a compassionate meet-cute between Jen and a neighbor. Always that juxtaposition.

The found footage “problem” has always been one of justifying the form. Farhang is our mouthpiece in that regard, forever questioning before finally growing a pair. In the case of Capture Kill Release, I sense that a more formal style of filmmaking would have resulted in a “Serial Mom”-type suburban homicide satire. Found footage works best when an enabler of ambiguity or intensity, and this is a movie that certainly falls into the latter camp.

Despite its simple premise and hopelessly simplified marketing (the actors drenched in gore), and despite its clunky title, Capture Kill Release is a very decent addition to a brand of horror that engenders eye-rolls as often as covered eyes. It sets out not to scare, but to shock through its characters’ uniquely grotesque convictions, and to unsettle in its depictions of a mundane world turned murderous. Go ahead and accept the invitation to the party — just don’t drink the wine. 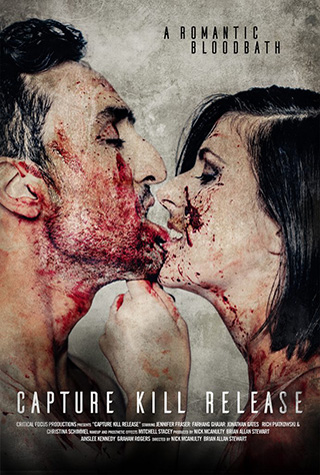