John Chester (“Rock Prophecies”), a nature cinematographer, and his wife Molly, a private chef and food blogger, had always dreamed of buying a farm and moving out of their cramped Santa Monica apartment, yet there was always a reason to put it off. The catalyst that changed their life forever, however, was a black dog named Todd that they rescued from deplorable living conditions.

In their home, however, Todd suffered from severe separation anxiety and insisted on barking the entire day when left alone, much to the chagrin of their neighbors and eventually their landlord who gave them an eviction notice. Somehow they found an investor (no details given) and were able to fulfill their dream by purchasing 130 acres of land in Moorpark in Ventura County, California 50 miles north of Los Angeles. It was, however, a land ravaged by the worst drought in California in 1200 years.

In John Chester’s often moving documentary, The Biggest Little Farm, John and Molly transform the dry, drought-stricken patch of land into a viable organic and biologically diverse farm they named Apricot Lane Farms. Gorgeously photographed by Chester and four other cinematographers and supported by the music of Jeff Beal (“Blackfish”), the film shows how, with the guidance and spiritual assistance of consultant Alan York, an expert in biodiversity, the Chesters strengthened the health and vitality of farm soil and, over a period of eight years, planted 10,000 orchard trees, 200 crops, a variety of plants and animals, and 76 varieties of stone (pitted) fruits.

The family’s experience of living in the paradise of their dreams came to an abrupt halt two years later, however, when they awoke to the reality that they had unwanted visitors, commonly known as pests. Fruit was being eaten by birds causing the loss of 70% of their crop, snails were destroying the tree trunks, gophers were attacking the roots, and chickens were being killed by coyotes and workers had to use their time to pick snails off of trees, dispense with dead chickens, and, in spite of his ethical concerns, John was compelled to shoot a coyote. When their lows became very low, York was there to advise them to be patient, telling them that the ecosystem, like life, is cyclical and will eventually find its balance.

Unfortunately, York died in 2014 from a virulent form of cancer but John, mirroring York’s worldview, was able to get in touch with what he referred to as the “rhythm of things.” “Stuff that should have us running for the hills now? It’s just the rhythm,” he said. “Like, this is the year of the gophers, or this is the year of the tumbleweed, this is the year of morning glory. Some things you have to react to, but for many, you just have to stay really quiet, calm and watch.” After five years, by using insects, plants, and other animals to fight pests without having to resort to pesticides, the rhythm he waited for had arrived.

Bees eventually returned, owls tackled the infestation of gophers, guard dogs were brought in to keep coyotes away from the chickens, and John, through the help of the Internet, learned how to attend to sick animals. This especially came in handy when Emma, a pig they had nurtured over the years, developed a fever and refused to eat, becoming seriously ill after having given birth to 17 piglets. With the assistance of her litter of piglets, however, not to mention a rooster known as Mr. Greasy, John and Molly were able to bring Emma back from being close to death, enabling her to begin eating again.

While Apricot Lane Farms is not a small mom and pop operation but a multi-million dollar enterprise that currently employs sixty workers, it is clear that the Chesters (whose family has grown to include a little boy) are dedicated to the environment and the power of regenerative farming. “Farming, with its scale,” John said, “has detached people from how crazily magical this all is.” Though the issue of climate change is not openly discussed, references to raging forest fires point to the immediacy of the issue.

Beyond fossil fuels and greenhouse gases, however, The Biggest Little Farm raises fundamental questions about the nature of our relationship to the earth: Do we consider ourselves as separate from the natural world or an organic part of it? Is the earth important only for its utilitarian value, or does it have value in and of itself? Can we extend our compassion to include all living things? The future of our planet may depend on the answers to these questions.

'Movie Review: The Biggest Little Farm (2018)' has no comments 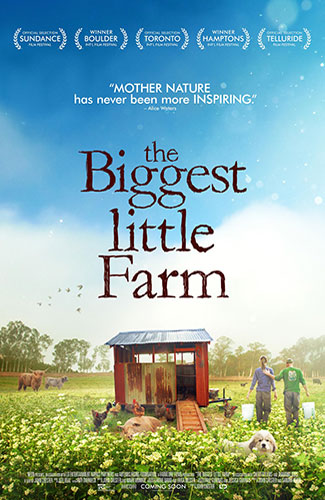