To describe Booksmart as “Superbad” with girls is to be reductive and overly simplistic. Nonetheless, it is a not inaccurate description of Olivia Wilde’s directorial debut, due to its winning combination of coming of age trials and tribulations, the strains upon teenage friendship and profane humor. However, these elements are combined in such a way as to make Wilde’s film both comfortingly familiar and refreshingly welcome, as well as being a remarkably assured and often stylish directorial debut.

Booksmart is the coming of age story of Molly (Beanie Feldstein, “Lady Bird”) and Amy (Kaitlyn Dever, “Men, Women & Children”), high school seniors about to graduate (not unlike Seth and Evan in “Superbad”). Molly and Amy are BFFs, overachievers focused on good grades and colleges, and also ardent feminists, activists and progressives (completely unlike Seth and Evan in “Superbad”), especially Molly who is both high school president and valedictorian. They have fulfilled every expectation any parent or teacher could have, and in the case of Principal Brown (Jason Sudeikis, “Colossal”), have gone beyond expectations, to the point that he is exhausted by their righteousness. As graduation approaches, Molly and Amy realize that they might have missed out on some aspects of high school and resolve to have a crazy night of partying.

But they get more than they bargained for.

Where “Superbad” focused on sex and the teenage boy obsession with losing virginity, the heroines of Booksmart have wider interests. Fundamentally, they want to have fun and be crazy, and do this together. This makes the film very much about female friendship and camaraderie. But beyond that, Amy and Molly are also hormone-crazed teenagers, both with objects of affection. Pleasingly, the film does not emphasize this as all that matters to them. Molly’s crush comes as a surprise and Amy’s homosexuality is as normal and everyday as Molly’s heterosexuality. In this way, the film echoes “Love, Simon” as a mainstream teen comedy with progressive politics. Continuing this vein, Molly’s eventual revelation about her crush is not a rejection of her academic commitment, the film never suggesting that girls should be interested in boys rather than books. Indeed, if the film makes a judgment of its protagonists, it is of their obsession, a fair enough character flaw to be critiqued. When juxtaposed with their classmates, inadequacies caused by their joint obsession become apparent, as do their insecurities. However, once again the film succeeds by integrating the obsessions of the protagonists with their new goals, demonstrating character growth and development. Amy and Molly’s studiousness, progressive politics and overall nerdiness prove useful, indicating that they were not wrong in their goals, simply that they can be everything they are and also everything they can be.

Nor are the other characters a set of stereotypes, as stoners, jocks, tomboys and rich kids alike all prove to be more than meets the eye, as indeed do the teachers (watch out for Jessica Williams’ Ms. Fine). All of these characters, complete with flaws and foibles, are presented in a way that is warm while also being hilarious. From its creative profanity to escalating absurdity (using hair as masks, anyone?), from cringe-inducingly liberal parents to hopelessly pretentious parties, Booksmart is a film that knows coming of age comedy tropes and clichés and revels in them while also exaggerating them to ridiculous proportions. Most prominent among these hyperboles is Gigi (Billie Lourd, “Star Wars: The Last Jedi”), a wild combination of the Zooey Deschanel archetype and Christian Slater’s JD from “Heathers” (without the homicidal tendencies). Gigi is the type of character you would probably hate and find infuriating in reality, but on screen she is delightfully engaging and very funny.

While Booksmart presents all its characters humorously, Wilde shows great affection for her cast, ensuring that we are always laughing with the characters rather than at them. Her direction is confident and assured, slipping from dreamy sng to an intense argument captured in a long take, which presents multiple planes of action through its careful depth of field. Strikingly in this sequence, voices and background noise are subsumed into the music, the argument expressed through facial gestures and pronounced mouthing. It is testament to Wilde’s direction and the central performances that we can follow the entire conversation despite not hearing a word. Even during the film’s most surreal sequence, when life in plastic proves less than fantastic, Wilde ensures that Molly and Amy remain engaging and relatable. Come the end of the film, the viewer may be wiping away tears of laughter and joy as well as being moved by the wacky yet familiar misadventures of our heroines.

Booksmart comes along at an interesting time, as we are living at a crucial moment in terms of representation. In the wake of #MeToo and the Harvey Weinstein scandal, and recent legislative developments, there has rarely been a more prime moment for women to put their stories in the public eye. Popular genres are the perfect vessel for communicating equality and progression. In this regard, and following on the heels of “Lady Bird,” “Mary Queen of Scots” and “Out of Blue,” Booksmart is a film one can not only enjoy but also admire. Not only does it possess winning humor, delightful characters and superb craft, it easily smashes the Bechdel Test and challenges the nonsensical notion that mainstream films need to focus on men. Therefore, Wilde and her cast deserve the utmost credit for their superb production, which we can all enjoy in the theater and champion afterwards. 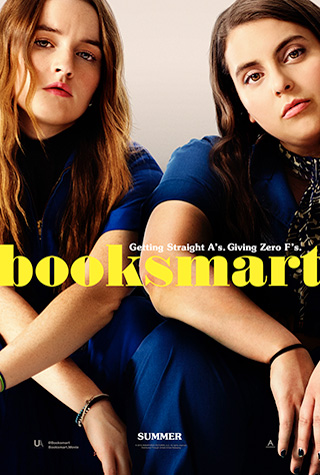