Ignacio “Nacho” Vigalondo is such a breath of fresh air. He values creative concepts and playful storytelling over exhaustive explanations and trite plot turns. He is fully aware of the tropes he’s toying with and knows when to tweak them and by how much. He’s very good at engaging the audience and then recognizing that engagement and making adjustments to keep us engaged. He’s ambitious, but not blindly or without purpose. He tackles difficult tasks and does interesting things with them. Between “Timecrimes,” “Open Windows” and now Colossal, I think he’s carved out a very unique identity that makes him stand out from all the other genre-dabbling directors out there.

With Colossal he takes a crazy concept and uses it to guide a troubled protagonist, Gloria (Anne Hathaway, “The Intern”), out of her alcoholism and self-destructive behavior. That the concept isn’t just silly, but actually metaphorically and thematically linked to Gloria’s arc is amazing. She has to learn to not be self-destructive by avoiding being literally destructive on a mammoth scale. And Vigalondo is never preachy about the message, acknowledging that Gloria needs to get her shit together, but not that she needs to be vilified in order to learn her lesson. In fact, despite essentially playing the role of a giant monster, which would be a villain in most movie scenarios, Gloria’s monster actually comes to be known as something of a “good guy,” adding another interesting shade to her arc.

The movie has a great sense of humor about it as well, right to the very last moment, which helps Vigalondo navigate the tricky dramatic territory. He lets us laugh at the zaniness while pulling us deeper into Gloria’s personal experience. He’s able to balance the comedy and the drama so well thanks to Hathaway, who is absolutely tremendous here. Seriously, I’d nominate her for this performance. It’s everything she does well, done brilliantly. She’s charming, silly, likable, odd, and just incredibly human.

Beyond Hathaway, what really works here so beautifully are the romantic twists. For a good while, it seems so obvious that Gloria is going to end up with guy pal Oscar (Jason Sudeikis, “Masterminds”). The whole love triangle-y situation with them and Tim (Dan Stevens, “The Man Who Invented Christmas”) is something we’ve seen a million times before. Tim represents Gloria’s past and he’s controlling, so we know they can’t end up together. Oscar is the complete opposite of Tim. He’s not a fancy dresser, he lives in small town America, not New York City, he’s a bit shlubby, he doesn’t judge Gloria. They also happen to be childhood friends, perfect for a romantic connection now as adults. Oscar is very sweet, helping Gloria out at every turn, and making her feel at home again.

Of course, he owns a bar and spends all of his free time drinking, so you could argue that he’s not a good fit for Gloria, either, but at first, it seems like a perfect opportunity for Oscar to grow up a little at the same time as Gloria. They both help each other. She helps him focus on fixing up his place of business instead of hiding away the parts with character (a metaphor for burying the past and then unburying it), whereas he helps Gloria get back on her feet with a job and an opportunity to start anew.

It’s classic movie romance pairing to take two people from different worlds and show how well they work together, even if a relationship seems out of the question at first. Vigalondo is very smart to keep Tim as a relatively constant presence in the movie, so we never forget what she left behind, what she’s running away from. Tim and Gloria talk on the phone and eventually he even turns up in the town. By keeping alive the possibility, however remote, that she might rekindle her relationship with Tim, Vigalondo slyly pushes us to predict, if not even yearn for Gloria and Oscar to get together. Oscar seems to genuinely care about Gloria and we get the impression that he’ll help her when she needs it, but without controlling her.

If Colossal is going to head down a conventional path, this is the one it will take and it’ll be cute and cuddly enough to work. But that’s not what Vigalondo has planned at all. I love that he makes Gloria her own woman. She appreciates all that Oscar has done for her, but she’s attracted to someone else (Austin Stowell, “Bridge of Spies”). She goes for it, enjoys herself, and that’s that. No judgement. Not a lot of movies have a female protagonist in what appears to be a love triangle go off to hook up with a third guy and then not shame her for doing so.

Instead, this reveals Oscar’s true self. What begins as immature jealousy, a realization (both for Oscar and we in the audience) that this crush he has on Gloria is not going to work out the way he wants simply because it’s a movie, soon turns into the reveal that he’s actually a self-loathing monster. This justifies the oddball appearance of Oscar’s robot counterpart, since a giant monster can always use a giant foe, but it also takes the story in an unexpectedly dark direction that says a lot about the fragility of masculinity.

Even after Oscar ramped up his frustration with Gloria, I still felt like he would eventually calm down and seek help or something. But again, Vigalondo surprises, illuminating how utterly destructive a person can become when they care so little about themselves that they stop caring about others as well. Oscar has been worse off than we could have known before and he figured that Gloria coming back into his life and he being so helpful and nice to her was going to make her his. The rejection he feels is then the final straw and he lashes out at her in the worst way possible since he’s suddenly been granted the power to do so.

It’s a pretty interesting commentary on good and evil because Oscar isn’t really either. He’s just a guy whose life never took off and he’s pissed about it. If Gloria never came back into his life and the whole thing in Seoul never occurred, he’d probably continue to live his life as before, just drinking more and more and sinking deeper into a pit of self-loathing. He would hardly seek the opportunity to incite violence, but when the opportunity falls right in his lap at the same time that he feels terribly slighted, the desire to do something, to feel something, however horrible, is intoxicating.

In terms of the fantasy elements in Colossal, I’m not crazy about the backstory explanation, which seems unnecessary at best and ridiculously silly at worst, but I love the idea that Gloria figures a way to stop the destruction — it’s a clever bit, certainly. And I’m amazed that after all the darkness, Vigalondo still has the gall to end on something of a comedic note. It’s a great ending, a funny one that brings the story back to Gloria’s main problem, and reminds us that for all the strides forward that she’s taken, she still has an ongoing road to recovery.

I just can’t believe that a movie about two people who discover they can control a giant monster and robot on the other side of the world has so much to say about the human condition and so much compassion for people in general. Vigalondo is such an exciting filmmaker. I really have no idea what he’ll come up with next, but I’m on board for whatever it is. 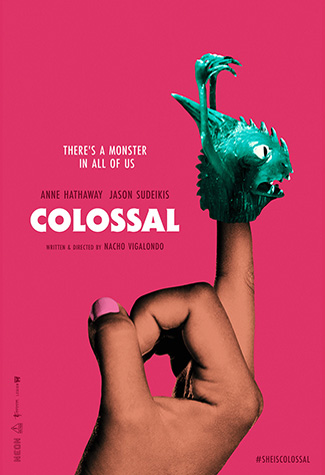