It’s nice to see a film version of an historical incident that that this author had no idea about. As a student of history, I’ve always prided myself on knowing as much as I could on as many subjects in this category as possible; and, like “Argo” (which also featured a classified backdrop) I found the topic of the early years of the Cold War interesting and compelling. With Bridge Of Spies, it is made much more so by the spot-on direction of Steven Spielberg (“Lincoln”) and the crisp period writing of Matt Charman (“Suite Française”) and Joel and Ethan Coen (Academy Award winning writers for “Fargo” and “No Country for Old Men”).

Now, everyone worth his salt (and over 40-years old) has surely heard of Francis Gary Powers and the U2 incident and how the spy plane and pilot were shot down over the Soviet Union in 1960, but this tale goes much deeper. It tells of the 1962 spy swap involving a Soviet mole, Rudolf Abel, Powers and an American student, Frederic L. Pryor, who had ended up on the wrong side of the Berlin Wall at the worst possible time. All of these individuals were mere chess pieces in a deadly game that, as the film unabashedly suggests, continues even until today.

Bridge Of Spies, however, opens in 1957 when Abel (Mark Rylance, “The Gunman”) is arrested and charged with three capitol counts of espionage. Seeing that he gets an adequate defense, but not a great one, the government coerces tax attorney James Donovan (Tom Hanks, “Captain Phillips”) to put up a token defense and get the spy convicted and (hopefully) executed as quickly as possible. Donovan, however, believes everyone (even criminals who enter the country illegally) deserve all of the protections of United States citizens. Despite his client’s conviction on all charges, he manages to convince the judge (Dakin Matthews, “True Grit”) to sentence him to a 30-year stretch in federal prison — instead of the electric chair. He does this by reminding the magistrate that one day an American might be captured in the Soviet Union and a death penalty would look very bad.

He also appeals the case, taking it all the way to the U.S. Supreme Court on appealing Constitutional issues, but he loses 5-4, and brings the wrath of some of his more “enlightened” neighbors down upon him and his family. Now cut to Pakistan, where Powers (Austin Stowell, “Whiplash”) is preparing for his first spy flight over the USSR. Of course, Donovan’s words to the judge soon come to fruition when the U2 is shot down, and, despite the CIA’s admonition of making sure he is not captured, Powers is taken prisoner and sentenced to ten years at hard labor. Then, when the Berlin Wall is being born, Yale student Pryor (Will Rogers, “A Good Marriage”) decides this is the perfect time to help his girlfriend escape from East Berlin. It isn’t.

Once all of these events collide, there is the danger of the more disinterested in the audience to drift away, with mounting degrees of confusion parried with a healthy dose of high-minded skepticism. Then Donovan, out of the blue, is called to meet Eisenhower’s CIA Director Allen Dulles (Peter McRobbie, “The Visit”), and asked to be the lead negotiator for the three-way deal. He is given no official title, no legal standing nor assistance from the government. Only his work with Abel is cited as the main reason for his being chosen for this thankless responsibility.

And because he has no backing — other than a few even less enthusiastic CIA agents bent on getting Powers back with no concern for Pryor — he is bullied by a bitter East German lawyer (Sebastian Koch, “A Good Day to Die Hard”), condescended to by Soviet KGB agents and even robbed by Teutonic thugs. He remains persistent, however, and boldly informs whoever will listen that there is no deal without BOTH Powers and Pryor and arranges the trade on the iconic Glienicke Bridge (thus the title, Bridge Of Spies).

Hanks gives a warm and convincing performance under Spielberg’s baton (just as he did in “The Terminal” and “Catch Me If You Can”) leaving no doubt as to his patented Everyman pedigree. Stowell is in fine form as the Air Force pilot forced uncomfortably into his spy role by the CIA and then realizing everyone hates him because he did not kill himself after being shot down. Also, look for an excellent performance by Scott Shepherd as CIA Agent Hoffman, who seems to be Donovan’s only ally in the negotiations, even if reluctantly so.

The main cog here, however, is Rylance, who wears the pain and futility of his Abel on him like an old hat and a loose-fitting jacket. His morose, sad-sack demeanor and few word betrays a man beaten down by his own existence and it’s almost as if he turned to espionage because he he had nothing left to lose. I do not like to write about awards and such, but if he does not get at least a Best Supporting Actor nomination, they should eliminate the category.

Look for amazing period detail, just as Spielberg accomplished with “Lincoln,” “Munich” and “Catch Me If You Can,” as well as allusions that transport historical occurrences to modern-day problems. Just like Robert Altman’s “M*A*S*H” was more about Vietnam than the Korean Conflict and “Munich” was as much about the contemporary Middle East than the 1972 Olympic massacre, so is Bridge Of Spies as much about today’s conflicts as much as the Cold War of 1962. With its scenes of prisoner abuse, arguments about American justice and all the cameras that record our semi-surveillant state, it suggests that the era has its own problems in the current war on terror. 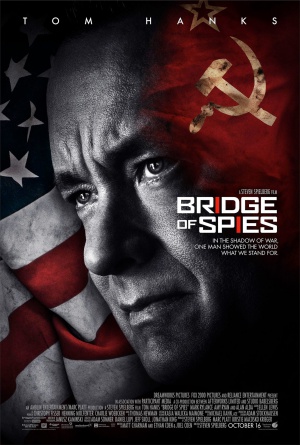