He Never Died was recently shown as part of the Spooky Movie International Film Festival, currently ongoing at the AFI Silver theater in Silver Spring, Maryland. In it, Henry Rollins plays a solitary grump who’s trying to escape from his past.

That grump, Jack (Rollins, “Wrong Turn 2: Dead End”), lives in a beat-up apartment building teeming with your garden-variety lowlifes. His landlady is probably ninety years old and none too observant. When she knocks on the door to collect the rent, Jack opens up a huge steamer trunk and pulls out wads of hundred-dollar bills. He pays her, she leaves, and he tries to return to sleep.

Jack’s always tired. What from is not immediately clear. He has no job, and he sleeps an awful lot during the day. At this point in his life, he’s just getting on to get by. At least until a knock at the door reveals a young lady who, seeing Jack’s haggard and somewhat-menacing face, immediately bolts. This young lady, we soon learn, represents a part of Jack’s past he’d just as soon forget. Technically, he’d like to forget all of it, but this one is a real humdinger.

Sleeping most of the day means that Jack’s usually up pretty late at night, and in fact one of his favorite haunts is an all-hours diner, where his waitress is almost always Cara (Kate Greenhouse, “Flash of Genius”). Cara, like many cinematic waitresses, is a single mom, and she’s oddly taken by the crusty old goat who (apparently) doesn’t eat meat or drink.

So who is Jack? There certainly seems to be something off about him. Maybe it’s his dealings with Jeremy (Booboo Stewart, “X-Men: Days of Future Past”), who sells Jack . . . something or other, on a regular basis. Maybe it’s other remnants from his murky past who pop up as well, or maybe it’s his remarkable fighting ability. There turn out to be two answers as to Jack’s identity; one seems obvious about twenty minutes into He Never Died, but the other lands quite the uppercut to the soul.

Rollins is a flawless choice as the world-wary, grizzled Jack, a man more or less comfortable with his life who finds it all come crashing down upon him in seemingly no time at all. Until his big revelation near the end, Jack seems to be a man with an interesting skill set, the kind of guy you really don’t want to mess with. A guy like Henry Rollins, perhaps, but unlike Rollins, Jack is a man of very, very few words as well as a man of emphatic action.

Writer and director Jason Krawczyk (“The Briefcase”) makes good use of Rollins’ screen presence and creates a surreal atmosphere of blood, death, despair, and energy. Carried by Rollins’ commanding performance, He Never Died is an intriguing action/horror/thriller hybrid with a dash of spirituality thrown in as an afterthought. And as everyone knows, a little added spirituality can go a long way. 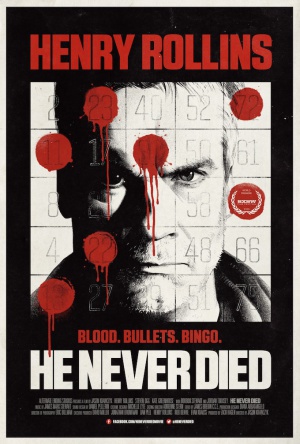