Let’s first begin by saying I’m a white guy. Some have said pasty white. I’ve always tried to overcome my caucasian roots by opening myself up to other cultures and thought processes. It is this reason — and this reason only — that I’ve decided to watch Stomp the Yard. After all, can there be any other reason to see a movie about step lines?

Unfortunately, Stomp the Yard exhibits all the same qualities as most other urban, black movies have. A troubled or a nonconformist youth put into a group situation where he falls in love with the pretty, unattainable girl and ultimately grows to be a better human being. I’ve seen it before in movies like “School Daze” and “Drumline.” The story is basically the same, just the creative outlet has changed. So perhaps it is my whiteness shining through – but this movie bored me terribly.

First problem (other than the fact the movie is utterly non-original) is the lame — yes, I said LAME — dancing. The battle scenes at the beginning of the movie weren’t overly impressive and the stomp dancing later in the film was repetitious at best. I saw little variation in the dance moves and even less movement in the faces of the dancers — are they all supposed to look angry all the time? I openly admit I can’t dance worth a shit, but I’ve seen better dance choreography at an N’Sync concert.

Second problem was the lack of story development. I got the feeling Stomp the Yard was simply thrust through a cookie cutter machine and dumped into theaters because there wasn’t any primarily black movies out at the moment. The writers could have made the story slightly more interesting by making me care, even in the slightest amount, about the movie’s main characters. DJ (played by Columbus Short) is an uninteresting kid. His love interest, April (played by Meagan Good) is even less interesting.

There is some good in all this though. Stomp the Yard, as its’ predecessors, offers the hope that there is indeed a better life out there to those who wish to grab a hold of it. It provided to me a good feeling when DJ entered Heritage House and paid respect to all the Civil Rights leaders and influential people who paved the way for him to succeed. More movies need to focus on uplifting people rather than portraying their stereotypes and continuing the circle of despair. Even though the message is true, it is convoluted and mired in a story that is plain and boring. There will be better movies in the future — hell, you’ve got to have hope! 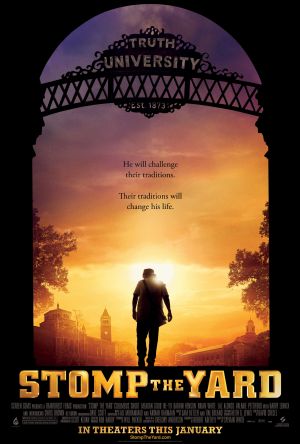