After a hard week of working around the house, I definitely needed some downtime. And what better way to enjoy some rest and relaxation than to sit back with an ice cold beer and watch the latest comedy romp starring Ben Stiller and Owen Wilson — Night at the Museum? The story certainly seemed funny (or scary as hell depending on the movie type); a museum whose exhibits come to life and the way the zany night watchman interacts with them. That’s about the only thing worth noting — the story certainly seemed funny . . .

In a word: Disaster. That’s really the only word that signifies how fucking bad Night at the Museum is. I literally found myself looking for other things to do, things like doing additional house work! There are without a doubt, one million missed opportunities for making this movie a “classic.” Think of it, one hundred+ rooms, each with a distinct, separate theme — Egyptian mummies, dinosaurs, ancient sculptures — the list goes on and on. The what do we get instead? We get a slap fight between Stiller and a monkey (which would have been infinitely better if the punchline was “Stop spanking the monkey“). We get cavemen who set themselves on fire and throw and eat fire extinguisher foam. We get a T-Rex who thinks it’s a dog. Whoppity-fucking-do.

Most upsetting though, was the lack of the comic rapport between Stiller and Wilson. I’ve long felt that these two together are as good as Laurel & Hardy or Abbott & Costello. They play off of each other so well (see “Zoolander” and “Starsky & Hutch”). Now granted, Wilson isn’t credited with being a co-star, but for the scenes they are “together” the tit-for-tat dialogue was nonexistent. Also disheartening was the obvious attempt to ride the “The Office” wave of popularity. Ricky Gervais, the creator of the original “The Office” and sometimes writer/producer of the American ripoff, seems to be dropped into scenes, with absolutely no forethought. He’s there simply to be there.

On a good note — yes, there are two bright spots — Robin Williams isn’t the overwhelming asshole he usually is. He role as Teddy Roosevelt is muted and reserved, something rather unexpected, as I thought Teddy Roosevelt was an overbearing person. It was also good to see Mickey Rooney on the big screen. I thought he died years ago, he sure looks like death warmed over!

In a nutshell, avoid Night at the Museum. The one or two chuckles aren’t worth the aggrevation of getting dressed, gathering the family, driving to the cinema, standing in line, forking over too much cash for tickets and treats, etc. Instead you should rent one of the aforementioned Stiller/Owen classics again. Those will surely make you smile. 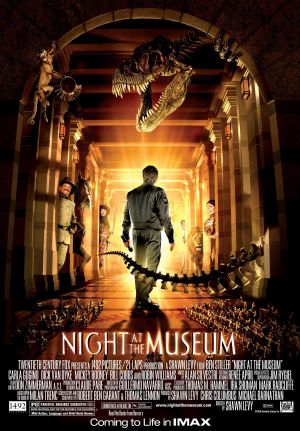