I can hear it now, the all encompassing theme to “Rocky” — “Gonna Fly Now.” Whenever, I hear that music I get goose-pimples all over my ass. And after five installments of the “Rocky” franchise, that’s about all that gets me excited about the movies anymore. Needless to say, most of the sequels have been a bit of a letdown. Can Rocky Balboa break the streak of Stallone shit?

In a word, no. This time around our hero, now old and out of shape is trying to come to grasp with being old, out of shape and alone. That’s right, Rocky is old and showing it. And that cut physique he used to have during Stallone’s steroid phase is largely missing. But most troubling of all is the absence of Talia Shire, who as everyone knows, played Adrian. Apparently she’s been written off as dead as even she realized no good could come out of a sixth installment.

However, it’s not that Rocky Balboa doesn’t try to bring back the butterflies that its’ predecessors drew from our stomachs. Stallone brought back as many characters as he could — Spider Rico (he fought him in the first film), an older Marie (she was the kid in “Rocky” who called him a creep) and of course Paulie, played by Burt Young. Stallone also drops in photo montages of Adrian and Mickey and brings us to all the old haunts — his old apartment, the ice rink he and Adrian had their first date, the pet shop, etc. And although I searched for ways to get sentimental, I couldn’t.

My biggest gripe though, is the obvious commercialism of the movie. There are at least 100 painfully obvious product placements throughout Rocky Balboa. HBO, Mandalay Bay, Golden Palace, ESPN, among a host of others are constantly paraded in our face. And for what? It doesn’t add any more realism to the movie. It just makes me realize how far the once great franchise has fallen.

Only the true, die hard fans of “Rocky” should care about seeing this movie. It pains me in the gut to say that Rocky Balboa should be skipped altogether by the rest of the movie going public. All the splendor that was “Rocky” is lost — and I hope to God — Stallone let’s Rocky rest in peace, here on out. 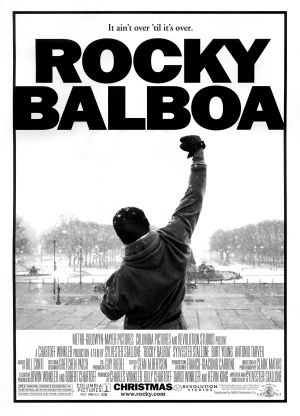