Jacques Audiard has previously explored his primary cinematic interests by telling a tale of crime as a way of life and a tale of an unlikely family as a means of redemption. Now he’s combined the two in his latest movie, where he examines the intersection of these dramatically rich topics with carefully complex attention. In his melding of these specific narrative elements, he’s pushed and pulled between two extremes and where he ends up is what makes the picture so fascinating. With Dheepan, Audiard seems to revel in bucking our expectations and riding out a thematic thread as long as he can before jumping on to another before falling into predictability.

This teetering balancing act seems new for Audiard and it makes for a thoroughly engaging watch, thinking the movie will go one way, watching it lean in that direction, and then suddenly seeing it switch over to a different tone and genre before the experience can be neatly defined. These well-timed twists and turns take the story to some challenging places and it’s not always easy in the moment to figure whether these seismic shifts are for the better, but there’s something furiously moving about the way Audiard hurtles forward.

He begins the story with an incredibly efficient series of shots that establish the setting and situation immediately. We’re in Sri Lanka where a few Tamil Tigers set flame to a bonfire of bodies, an instantly searing image of war’s aftermath. Then we’re following Yalini (Kalieaswari Srinivasan) as she hurries through a refugee camp in search of an unclaimed child. She finds one and then we’re in a tent with one of the soldiers from the opening shot and we learn that these three are set to pose as a family so they can flee the war-torn country and begin their lives anew.

The soldier becomes Dheepan (Jesuthasan Antonythasan) and suddenly we’re in France, where the fake family has been relocated. It’s a rough transition, of course, but when they’re moved to a derelict apartment complex on the outskirts of Paris, a tiny seed of hope appears ready to grow. Dheepan gets a job as the caretaker of the area and his “daughter” Illayaal (Claudine Vinasithamby) is integrated relatively smoothly into the school system. The only problem is the transparent drug operation set up at a neighboring building and the gang war it’s inspiring in the background.

So it would seem that Audiard’s movie is about to become a cautionary tale about the impossibility of escaping your past, of how violence and fear and horror have a way of never letting go once their claws are deep inside you. It works as a look at socioeconomic struggles as well, showing that those who start at the bottom are often pinned down there for reasons beyond their control.

Or maybe it’s all a red herring? Perhaps the boiling tension is palpable only because we’re conditioned to expect that movies with gun-toting drug pushers will eventually lead to tragedy. It’s the openness of the possibilities that makes Dheepan so intriguing. Audiard introduces narrative elements that would normally dictate sharp turns in the plot, but then he teases them out to the point where we’re not really sure what to expect.

Could this really just be the tale of an unlikely family making it work and bettering their lives as a unit? Audiard toys with our confused expectations and keeps us guessing. It’s a risky move if the unpredictability is all he has to offer, but the cast allows the director to strike a more resonant chord without relying on plot twists. The main trio of Srinivasan, Antonythasan, and Vinasithamby deliver such dazzling performances that an emotional investment in their characters’ plight can be made rather effortlessly. They’re all completely convincing, both in how they grow and deal with the situation as individuals and in how they begin to integrate with each other in these trying times.

Relationships are forged in the most natural of ways, with just conversations over a dinner table or moments in a school hallway. Audiard extracts tender performances through exquisite exchanges that ask much of the actors. He clearly has great faith in their abilities and his decision to rely so heavily on his tremendous cast is a key reason that Dheepan moves through its twists and turns so powerfully.

Once Audiard has us caring about the characters, then he’s got us in prime position to follow the story wherever it goes. We want things to work out for these three and yet we sense the escalating dangers as tensions surrounding the drug operation reach a boiling point. From here on out, Audiard assumes that we’re now fully invested and he suddenly does a headfirst dive into grungier genre territory before coming out the other end with an optimistic message of love.

It’s both an exhilarating and off-putting thing to watch because the picture goes down the path it originally looked to be eyeing up, but explores it unexpectedly and gets there in nerve-jangling fashion. Audiard throws fuel on his film’s thematic fire and forces us to question the role of violence in Dheepan’s world more confusedly than ever. Considering the bare-bones narrative elements here, there seems no doubt that Dheepan is anti-violence, but whereas that point seems cut-and-dried for most of the running time, it’s suddenly up for debate by the end. Does violent aggression serve a necessary purpose in otherwise unbeatable situations?

It’s an odd place for the movie to go and made odder by a final scene that’s sure to polarize viewers, but ultimately, it makes Dheepan a richer, more mesmerizing work. It speaks as much about the plight of poor immigrants simply fighting to survive as it does about cinema’s penchant for thrills and happy endings. A curious combo for sure, but one that Audiard and his incredible cast treat with such heart and energy that it feels excitingly essential. The line between cinema and reality seems purposely visible here, each side feeding the story in its quest for hope. 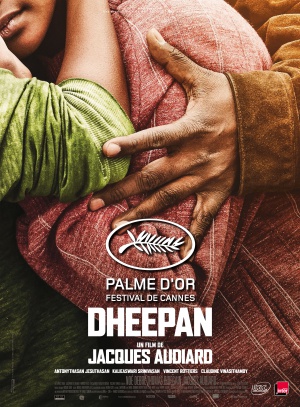