Though the story has been told before (again recently in the New York Post of June 24th), seeing how three young lives were damaged in the name of scientific research turns the story from an interesting read into a visceral and ultimately heartbreaking experience. Tim Wardle’s (“One Killer Punch”) investigative documentary Three Identical Strangers traces the lives of triplets, Robert Shafran, Eddy Galland and David Kellman, all born to a teenage girl on July 12, 1961 in Glen Cove, New York. Placed in different homes by the same adoption agency at the age of six months, neither children nor the adopting parents were told about any other family members, only that the children were part of a “routine childhood-development study” which would require periodic visits and testing.

Using archival footage, home movies, interviews, and recreations, the film traces the trajectory of the boys’ life from their happy reunion after nineteen years to subsequent events that are much darker in tone. The boys discovered that they were members of a family of triplets almost by accident. When Robert began his freshman year at Sullivan County Community College, he was repeatedly mistaken for Eddy (who had previously attended the school) and who he soon learned was the twin brother he had never known.

The story of the reunion of the long lost siblings received wide attention in the newspapers and was spotted by David, the third brother, a student at Queens College, and the three were reunited in a tale so amazing that Shafran is quoted as saying, “I wouldn’t believe it if someone else was telling it.” The happy reunion becomes fodder for media talk shows as the three are interviewed by Phil Donahue, Tom Brokaw and others and display an abundance of charm and sincerity. Without mentioning any possible differences that might exist, they talk about all the things they have in common.

Posing in the same position on stage, they tell us that each of their families had an older sister, they all wrestled in high school, they all like the same color, smoke the same cigarettes (here’s a nod to Marlboro), like the same type of women, and, presumably enjoy the same kind of fawning publicity. The rush of fame soon becomes a crescendo and the brothers even make a cameo appearance in the movie “Desperately Seeking Susan.” With David and Robert providing the narration and with non-stop pop songs in the background, we follow their lives as they move in together and open a successful restaurant in Soho appropriately called “Triplets.”

After a period of time, however, a family dispute, the nature of which is undisclosed in the film, ends in Robert leaving the restaurant and moving out. Little by little, disturbing events surface. As Bob Dylan’s song goes, “It’s not dark yet, but it’s getting there.” As told by journalist Lawrence Wright, the reporter who broke the story, we learn that all three brothers had emotional problems. Kellman and Galland had spent time in a psychiatric hospital and Shafran was on probation after having pleaded guilty to charges connected to a robbery. We also learn about Dr. Peter Neubauer, a highly regarded psychologist and Holocaust survivor who ran the research study, the Louise Wise adoption agency, and the Jewish Board of Family and Children’s Services, all who played a role in the events surrounding the triplet’s lives.

Wardle also includes the story of two other twins, sisters separated at birth by the same adoption agency. While there are important events described in Three Identical Strangers that are best left for the viewer to discover, needless to say, they are very disturbing. Although some of the film’s conclusions are little more than speculation and there are many things that are still not known (records are sealed until 2066), what we do know is enough to shake our faith in any scientific research divorced from considerations of humanity. 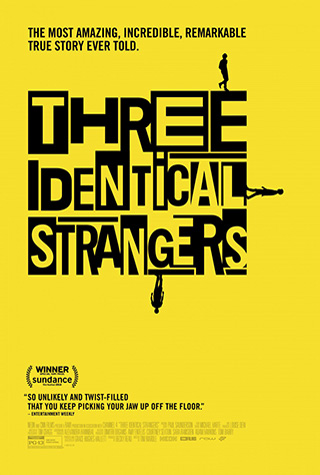