2036 Origin Unknown, an obvious and rather ridiculous ripoff of “2001: A Space Odyssey” is aggressively dumb, purporting to be more for fans of science than fans of fiction, but really disappointing fans of both. It’s a time-consuming cure for insomnia, is what it is.

It’s the year 2036 (duh). Mankind has replaced most of its mission control personnel with artificial intelligence. The humans are there just to make judgment calls. Mack (Katee Sackhoff, “Don’t Knock Twice”) is one of these humans, and her personal mission is to find out what caused the fatal crash of a manned mission to Mars some eight years earlier. You won’t be surprised to learn that her father was onboard that particular space-faring vessel. Mack’s sister Lena (Julie Cox, “The Oxford Murders”) is Mack’s polar opposite, a no-nonsense, tough-minded authoritarian who happens to also be Mack’s supervisor. She doesn’t want Mack poking around too much. The third component of this tension party is the actual AI, named — cleverly — ARTi. Yes, the artificial intelligence is named “artificial intelligence.”

The first conflict arises when ARTi (voiced by Steven Cree, “Churchill”) and Lena decide to move up their Mars probe launch about six hours without consulting Mack. Then ARTi starts countermanding Mack’s decisions regarding the actual operation of the mission. That’s when Lena delivers the bad news that ARTi is really meant to be a leader to humans, not the other way around. (A good chunk of 2036 Origin Unknown is thus spent with Mack trying, for some reason, to get ARTi to laugh. I’m glad he doesn’t, because it would have sounded like an early IBM voice synthesizer. Ha. Ha. Ha. She even tells him a robot-walks-into-a-bar joke).

The probe makes it to Mars, as expected, but an amazing discovery straight out of the aforementioned “2001: A Space Odyssey” is made. All that’s missing is “Thus Spake Zarathustra.” ARTi tries analyzing the patterns on the outside of the thing but isn’t granted access to the library by Lena. This is apparently because Lena suspects that someone on the original mission-control team is a turncoat, though I’m not sure why. At any rate, as the movie progresses and ARTi becomes more autonomous and Mack tries to figuratively connect with him, some actual science fiction is happening, colliding directly with sociopolitical reality concerning the rights of individual countries to do some rough stuff in outer space. You won’t care.

The object’s origin is never discovered, but its purpose is, and it’s not important either. You might recall that the ending of “2001: A Space Odyssey” was intentionally cryptic. This one is the opposite. I mean, it’s sort of vague, but the viewer is meant to infer something definite. But because the script is so lazy and generic, the explanations don’t feel legit; they feel like cop outs. But that’s in keeping with the rest of the movie, so there you go.

Sackhoff is done no favors by the inane script and direction. Her stress level is shown by how hard she squeezes her stress ball or how firmly she folds her arms. But the actress is also wholly unconvincing as some kind of wunderkind space expert; she’s forever making doodles in a notebook that are about as complex and fraught with meaning as those in a four-year-old’s composition book. Sackhoff tries desperately to convey some sort of gravitas, some sincere passion on the part of Mack, but she just can’t reach that itch. But like I said, it’s just not her fault entirely, as so much of the dialog sounds like it was put together by an early-stage chatbot.

So 2036 Origin Unknown (note the weird lack of a colon) isn’t very good, and you’re really best off not knowing what the origin is. It’s tedious, but because it is filled with unintentional comedy, one might watch it just to find all the things wrong with it. Here’s one of my favorites: ARTi somehow evolving, over the course of less than a day in the movie, from being a by-the-book office drone to providing analysis and countering his own programming. Do tell me yours if ever you get the nerve to view it. 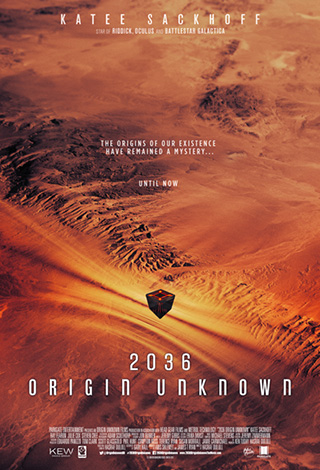