“Jay Chandrasekhar helms this wacky vehicle with all the conviction of a defective police siren . . . feels more like an excuse for Chandrasekhar and his fratboy Broken Lizard comedy troupe players to merge and serve up their pet project just to kill some time.” —
Frank Ochieng’s critical take on 2001’s “Super Troopers” (cited from the featured article at unrealitymag.com: Ten Classic Movies that Critics Hated)

Nearly 17 years later this particular reviewer’s sentiment has not changed in the least about star/co-writer/director Jay Chandrasekhar’s shoddy gesture at aimless law enforcement lunkheads participating in manufactured mayhem. In fact, with Chandrasekhar and fellow copper cohorts Steve Lemme, Kevin Heffernan, Paul Soter, and Erik Stolhanske again strutting their nonsensical stuff in Super Troopers 2 it may have dropped further, if it was to move at all. Hence, without question, there is again no notable arresting development for the empty gags perpetrated in this latest asinine policing puff piece.

No doubt that Chandrasekhar and the rest of his Broken Lizard players wanted to capitalize on the wave of pop cultural nostalgia and recapture the big screen mockery that made their banal brand of handcuff hilarity resonate so soundly among the stoner crowd so many moons ago. However, the familiar spotty humor is meagerly highlighted by gimmicky and throwaway opening sequence cameos (provided by Seann William Scott and Damon Wayans Jr.) and cockeyed police procedural platitudes as it strains to provide the zaniness of the original. Sure, Super Troopers 2 will automatically register with the devoted Broken Lizard fanboys that will still get a kick out of the left field antics of the knucklehead foolishness. For the rest of us, this fruitless farce will be as appetizing as getting sprayed in the face with mace while jaywalking.

In the aftermath of ruffling feathers involving a touchy incident with Fred Savage, the Vermont-based bumbling badge boys — Arcot “Thorny” Ramathorn (Chandrasekhar), MacIntryre “Mac” Womack (Lemme), Jeff Foster (Soter), Rod Farva (Heffernan) and Robert “Rabbit” Roto (Stolhanske) — had all lost their policing positions from the conclusion of the first film. In Super Troopers 2 the guys are still hanging around and doing nothing of real consequence until they get a break from out of nowhere. The crew’s professional stagnation is rescued by their old boss Captain John O’Hagan (Brian Cox, “Churchill”) and Vermont governor Jessman (former TV “Wonder Woman” knockout Lynda Carter) looking to tap them for special duty. Specifically, the brain-dead bunch are asked to patrol some questionable Canadian turf that is actually considered part of Vermont’s border. So our trusty troopers are charged with containing what amounts to be a potential land dispute between the USA and Canada. Can the Vermont state troopers restore order and keep a watchful eye on the controversial real estate (without causing an international incident)? Can these klutzy crime-busters earn some redemption along the way?

Much like a prolonged red light at a busy intersection, Super Troopers 2 has the audience sitting around waiting for the parked frivolity to get going. The half-baked shenanigans are painfully predictable and light-footed in lunacy with no genuine cynicism or irreverence to truly grasp. There is ridiculing of Canadian customs and accents that seem utterly tired. Goofy-minded mounties and Port-a-Potty attacking bears are showcased for a few cheap chuckles. An admittedly delightful Rob Lowe (“Monster Trucks”) as a smug Canadian hockey player-turned-politician (having a bad hair day) is a legitimate hoot among the forced levity, while the sensual Emmanuelle Chriqui (“5 Days of War”) adds to the fluffy atmosphere as flirty eye candy. And yes . . . the American side gets its share of pathetic pokes as well (self-absorbed fatties with superiority complexes). Let us not forget the wealth of crotch sight gags, penis references, female hormone drug digs, metric system misunderstandings and of course each of the Broken Lizard personalities gaining an opportunity to shine in colorful obnoxiousness — particularly Heffernan’s oafish Farva.

For devoted stoners to overactive teen boys fueled with sugar highs, the “classic” crassness that made “Super Troopers” an unruly gem is still a source of bewilderment to behold here with Super Troopers 2, but hey . . . even watching a 30-minute mudslide can be somewhat eventful if mindlessness is all that is required to satisfy. On the bright side, at least Chandrasekhar and company left alone any possibilities to reinvest into their other rancid romps like “Club Dread” and “Beerfest” . . . at least for the time being anyway. One would guess that the National Lampoon and Monty Python troupes need not lose sleep any time soon if this amounts to the competition. 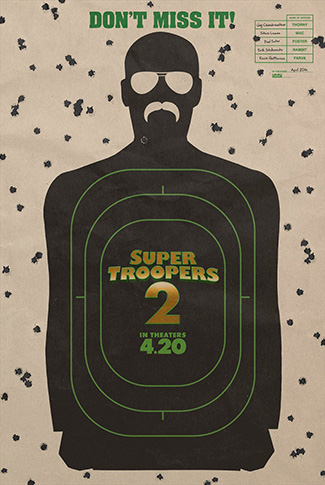