A friend of mine once argued about the redundancy behind DC Comics; its name, he claimed, originally stood for Detective Comics, thus by adding an extra ‘comics’ at the end, one is left with the awkwardly titled Detective Comics Comics. Though, despite the discrepancy behind the publisher’s name, it has remained a powerhouse in the comic-book world. However, by offering darker, more humane characters (such as Batman and Superman), it never stood a chance to its chief competitor, the more colorful, Marvel Comics, especially cinematically (save for “The Dark Knight“). By promising DC a parallel to 2008’s “Iron Man,” Director Martin Campbell (“Casino Royale,” “Edge of Darkness“) planned on changing all that with Green Lantern. Unfortunately, although its hero can conjure up swords, machine guns, and flamethrowers on a whim, his powers can’t account for a confusing plot, bland characters, and flawed CGI.

Greg Berlanti, Michael Green, Marc Guggenheim, and Michael Goldenberg’s script spares no expense in introducing a convoluted narrative. The film opens with an almost undecipherable intergalactic battle between Abin Sur (Temuera Morrison), one of the galaxies’ Green Lanterns, warriors chosen by the power of Will to protect their respective planets, and Parallax, formerly one of the ancient aliens that divided the universe into smaller slices to ensure peace, now an embodiment of Will’s unstable counterpart, Fear. Fortunately on Earth, where Hal Jordan (Ryan Reynolds) resides, people have more modest lives. That’s to say, until the young playboy pilot, interested only in fast cars and even faster planes, finds himself chosen by a dying Sur, who hands him the ring — a weapon used to channel one’s imagination, turning thought into reality. But there’s a catch, its bearer must be fearless; now Jordan, whilst attempting to master his newfound strengths and earn the respect of his fellow Lanterns, must find that courage within himself.

Nevertheless, Hector Hammond (Peter Sarsgaard), a down-and-out scientist, makes things difficult for Hal. Despite not being respected in the field (and reduced to a life of teaching), his father, Senator Hammond (Tim Robbins), requests that he partake in Sur’s autopsy. Yet during the “routine” procedure, while digging into the alien’s wounds, the mustachioed genius is bestowed extraterrestrial might; with the ability to read minds, survey a person’s memories, and move objects telepathically, Hammond catches Parallax’s attention — a match that promises Earth’s destruction.

An unrecognizable Sarsgaard (most famous for his work in “An Education“) is the saving grace for Green Lantern. The Illinois-born actor, known for playing the disturbed and demonized, adds another layer to Hammond — one of fear and desperation. It’s a welcome touch, seeing as the production’s eponymous protagonist is so one-dimensional.

Then again, it’s expected. Except for Hammond, none of the characters feel organic; the collected composure they maintain while staring death in the face is appalling because even in fantasy, there needs to be a hint of realism. Campbell’s latest doesn’t have that. Hal’s reactions stick out especially; one particular scene, where he discovers Sur’s crashed spaceship, is all-too-damning — to think that one’s immediate reaction to seeing a purple, humanoid creature, lying in a pool of his own violet blood, would be to stare straight-faced and recommend hospitalization is laughable (I, for one, would be running in the opposite direction). It doesn’t help that Reynolds looks ridiculous in a computer-generated suit — most notably during flight, when the actor’s head is awkwardly placed atop the effects.

However, praise is due to the design team responsible for crafting the otherworldly planets and Green Lanterns, which range from being one-eyed giants to anthropomorphic fish and red-skinned Michael Corleone lookalikes (I am, of course, referring to Sinestro, played by Mark Strong).

But did I mention that there’s also a romance between Carol Ferris (Blake Lively), the daughter to a business tycoon, and Jordan? Sadly, it’s superfluous and their dynamic, as two childhood friends, now co-workers, who secretly yearn for each other, is far too clichéd. And although Lively is superb eye-candy, she overacts and makes her character the epitome of a teary-eyed sideliner, rather than the strong, intelligent, and fully-able woman meant (and deserved) to be portrayed.

In all, Green Lantern is a mixed-bag. It polarizes audiences with its origin-heavy storytelling, separating the jubilant diehards from a flock of baffled (ultimately unsatisfied) mainstream movie-goers and having a good-lookin’ but boring hero doesn’t help. Sometimes, potent (but problematic) visuals are enough to entertain; this is the case with the film’s third-act (glossed over by technology, the final battle is a spectacle). Unfortunately, due to a pair of bulky 3D glasses (significantly dimming the production) I wasn’t sure as if to take the film’s tagline, “In Blackest Night,” as a serious warning. 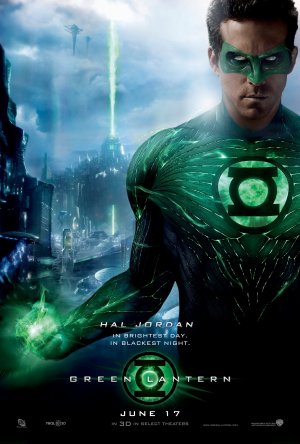