One of my favorite movie franchises has got to be James Bond. The man has it all — fine clothes, awesome gadgets, skills in every study known to man, kick-ass cars and of course, smoking hot chicks who line up to screw him. Who wouldn’t want to emulate that? However, it is with some skepticism, that Hollywood has chosen to remake Casino Royale instead of gracing us with a new adventure.

For this remake, Pierce Brosnan has been kicked to the curb and in his place Daniel Craig takes the lead as everyone’s favorite 00 agent. I must admit the change is definitely for the better. Craig (whom I admittedly never heard of before), fits the part better than the bulk of his predecessors (time will tell if he can overcome Connery). First, he looks the part. Bond is supposed to have rugged/refined looks and chiseled body. Roger Moore looked like a fag, Pierce Brosnan was too small and Timothy Dalton was too pretty. Secondly, Craig appears to have the natural Bond swagger. Cocky and egotistical — just like me! Lastly, I’ve always felt Bond was more of a dirty, hands-on kind of agent. From his looks, Daniel Craig appears to have been working in a foundry for the better part of his life, and it translates well to the character.

Another surprising twist on the franchise is the realism. Casino Royale is by far the most realistic Bond flick to date. The fight scenes are brutal and at time painful to watch. 90% stunt sequences are done by humans on location. Very little CGI touch ups, as was the downfall of the later Bond flicks. This leads to some “HOLY SHIT, I would never have done that” or “That was fucking CRAZY” moments. The most significant change, is the lack of the ass. I expect at least three women a movie to get conned and screwed. And I expect them all to be hot as hell. Here, only one girls gets tapped and he falls in love with her! Not what I want from my favorite spy.

That being said, there are a few fatal flaws. Instead of showing us the hot chicks, our fearless directors have instead decided to show us countless shots of our hero with his clothes off. I can appreciate the looks of a fellow handsome chap, but I’ll be damned if I want to see his bare chest every 15 seconds. Another let down, albeit not as painful as the lack of women, is the continued casting of Judi Dench as M and the lack of any Q. Dench just doesn’t come across convincingly enough for me, for me to believe she is the tough as nails, head of MI6. This role needs to be recast (although it appears Dench is slated as M in the upcoming Bond movie). And although the movie wanted to focus more on the character development of Bond (how he overcomes mistakes, character flaws, etc.), I still felt they could have dropped a few techno gadgets his way. Who doesn’t love crazy gadgets whose sole purpose to kill a person in a bizarre fashion? There are also times when Casino Royale runs a bit slow. The poker game takes forever to end. The lovey-dovey shit between Bond and his love interest, Vesper Lynd (played by Eva Green) is boring. 15-20 minutes could have easily been shaved off of the this 144 minute epic without the loss of anything important.

So, my recommendation is simple. If you are a fanboy (or girl) of the Bond series, see the movie. You sure as shit don’t need me to convince you to see it. For those of you who enjoy a good action movie, you won’t be disappointing. There are enough fights, chases and other assorted action sequences to overcome the obvious plot twists and bathroom break moments. 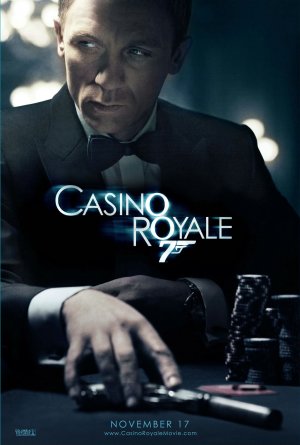