Yeah, I’m beyond bored. Of course I could find something important to do around the house, but I find I prefer to lay around and sleep. For some strange reason between naps, I figured I could fill and hour or so with one of the latest CGI dominated movies Happy Feet.

Happy Feet is like the rest of the pool — a kids movie dominated with animals with an underlying adult theme. The only differences are which animal(s) to shape the movie around (this time it is emperor penguins) and which political/environmental cause can the liberal directors sneak in and pass off as entertainment (this time is over-fishing in the Antarctic). Yawn.

Although the formula itself is a snorefest, this movie tries to differentiate itself from the others by presenting itself more a musical. From the beginning to the very end, Happy Feet is slathered with song and dance sequences. I found myself enjoying the choice of songs on occasion and was impressed with the large choreographed dance segments. The solo tap dancing shots of Mumble (main penguin character) were, unfortunately, too many and rather boring.

Another plus of the movie is of course the graphics themselves. The feathers on the penguins was very lifelike. A great deal of effort went into recreating the realism of the Antarctic. The land masses were finely detailed. The shots of the oceans made me feel as if I were at sea (where I prefer not to be). As technology advances, I fully expect these types of movies to get better at blurring the line as to what is and isn’t computer generated. Happy Feet is clearly the best offering available at the time of this review.

Detracting from the movie is some of the voice casting. Nicole Kidman lends her voice to Norma Jean (Mumble’s mother) and as you may have guessed she sings and talks like — Norma Jean (Marilyn Monroe for those of you who are not of sound mind). Problem is the baby talk voice Marilyn used at great length becomes extremely irritating after a few minutes of hearing it. Robin Williams voices several characters, but the voice for Lovelace is particularly annoying. I simply can’t stand the overbearing, hyper side of Williams and unfortunately, it is this side that he lends to Lovelace. Also, it bears to be repeated that I simply don’t like political agendas being sneaked into my films — but I REALLY don’t like it when they are slipped into a children’s movie. Luckily, the environmental/human aspect is revealed in all it’s glory in the last 15 minutes of the movie, so it doesn’t overpower the entire story. However, I would love to see the U.N. actually be of use in the real world as much as it is here. In a matter of months fishing is curtailed in the Antarctic! Amazing! 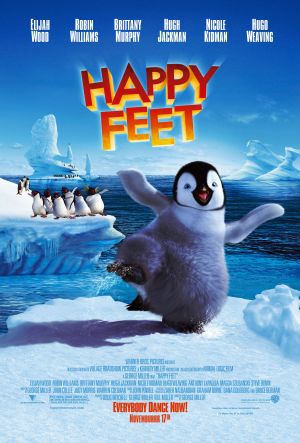