In the last few decades, films about workers and the labor movement in American cinema have been few and far between. Documentaries such as American Factory, however, can begin to shed light on the problems facing workers in the 21st century world of global capitalism. Directed by Steven Bognar and Julia Reichert (“Making Morning Star”), American Factory is one of five nominated films for Best Documentary at the 2020 Oscars and the first Netflix film produced by Barack and Michelle Obama. The film follows the fortunes of Fuyao, a Chinese corporation that took over a closed G.M. plant in Moraine, Ohio in 2014, a closure that left thousands of workers unemployed.

One of the largest manufactures of glass products in the world (Fuyao’s products are used in car windshields and windows in major car companies such as Honda, Volkswagen, and Ford), there was a great deal of optimism when Fuyao arrived. Fuyao Chairman, self-made billionaire Cho Tak Wong promised that there would be 5,000 new hires over the next few years, welcome news to many who had been out of work for years. At the opening ceremony, Wong announced that he planned to bring in Chinese managers to train both newly hired American workers and Chinese employees to help in their mutual adjustment to their new jobs, an announcement that heralded the promise that workers of different cultural backgrounds could form a common bond.

When Ohio Senator Sherrod Brown reminded the assembled crowd that America has always relied on unions to further the goals of the working class, however, the first hint of conflict surfaced. Adamantly opposed to unions, one American Fuyao employee said he was going to prohibit Brown from ever again coming to the plant and threatened to kill him if he does. Wong said that “If we have a union, it will impact our efficiency, thus hurting our company. It will create a loss for us. If a union comes in, I’m shutting down.” Despite the initial optimism, even setting aside the idea of unions, issues between the two cultures soon become apparent. Under the new ownership, there were 11 industrial accidents during the first year and safety had become less important than meeting ambitious production quotas.

Though no obvious examples of racism are displayed, little understanding of cultural differences is shown and management decides that Americans are fundamentally lazy. “They dislike abstraction and theory in their daily lives,” one manager warned, complaining about how difficult it is to train “slow” American workers with their “fat fingers.” One Chinese employee says that she gets to see her children only once a year and complaints begin to be heard by Americans about working conditions. One worker says that her house was foreclosed on. “Ever since then, I have struggled to try to get back to middle class,” she notes, adding that she is currently living in her sister’s basement.

Another worker complains that, with G.M. she made $29 dollars an hour. At Fuyao, however, she is only paid $12.84. “Back then,” she says, “if my kids wanted a pair of new gym shoes, I could just get them, I can’t just do that now.” To attempt to smooth over the conflict between cultures, transplanted Fuyao employees listen to stories of Americans’ honesty and are told that in this country, “you can even joke about the President and no one will do anything to you.” Also, a group of supervisors are selected to visit the Chinese plant in Fuqing, but it only serves to underscore the differences. Chinese employees are shown engaging in morale-building exercises including songs and dances and we see them line-up daily as if they are preparing for boot camp.

Some visitors remark that the space between lines of production is too narrow to be safe and are taken aback when they watch Chinese workers slowly remove broken glass using only their hands. They note that in China employees work 12-hour shifts, with one day off a month and live together in close quarters, often six people to one apartment. Chairman Cao remarks, “The point of living is to work. Don’t you think so?” perhaps the most current answer to the riddle of life’s meaning. Needless to say, getting home in time to eat dinner as a family is not a high priority. There is no discussion in the film, however, about whether American workers should try to emulate the Chinese standards or if the Chinese should become less rigid in their workplace approach.

When the campaign to organize a union gets underway, a worker walks through the factory carrying a sign telling people to vote “yes” on the union, but he is unceremoniously escorted out of the plant. As the organizers begin to build support, the company hires a labor-relations consultant whose only job is to convince the workers not to join the union. Unfortunately, in the struggle for who controls the lives of the workers, perceived job security and submission to authority wins out and the proposal to form a union is resoundingly defeated.

Though there are no heroes, there are also no villains in the film and American Factory makes a sincere effort to strike a balance between employee’s desire for better working conditions and management’s goal of maximizing profits. What is apparent is that the current system is not focused on the needs of workers and Fuyao confirms our worst preconceptions by spying on its employees, letting go those who are known to be union sympathizers, and scheduling regular meetings designed to instill trust in management. Unfortunately, the growing specter of automation in industry may make all the cultural differences in the world irrelevant. 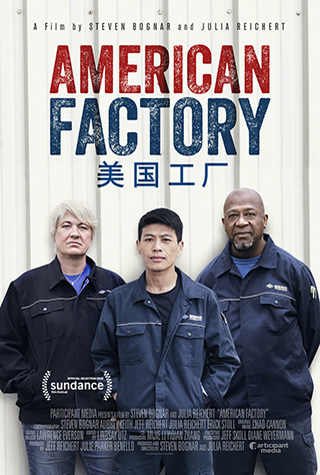