Waiting for Anya, directed by Ben Cookson, who co-wrote the screenplay with Toby Torlesse, is a film that falls within a popular World War II sub-genre that focuses on a local conflict between German occupiers and French non-combatants, typically set away from the civilian centers that suffered crushing horror, destruction, and death. Based on a true story, the film focuses on the attempt of a group of residents of Lescun, a small Southwestern French town in the Pyrenees, who hide a number of Jewish refugees while devising a nebulous plan to somehow lead them to a safe haven over the border into neutral Spain.

The film is based on a children’s book of the same name, written by the popular British novelist Michael Morpurgo (author of the novel War Horse, the basis for the 2011 Stephen Spielberg film). When a small company of German soldiers appears with an assignment to guard and secure the area, the townsfolk, led by the wise Widow Orcada (Anjelica Huston, “50/50”) and Henri (Jean Reno, “Cold Blood”) a tough, wizened veteran of World War I, craftily find ways to deceive the war-weary occupiers. Each of these seasoned actors does an admirable job in creating individual characters, which in less capable hands, could have been reduced to stereotypes. However, the film’s focal protagonist is the 14-year-old-boy Jo Laland (Noah Schnapp, “The Peanuts Movie”), who decides the moral thing to do (while his father is being held at a Nazi work camp) is to help the ragtag townsfolk harbor the unfortunate refugees. Jo also stands out because the other townsfolk engaged in the subterfuge are primarily older men or women.

The film’s central narrative trope is the reminiscence of the elderly Jo, who, through reflection many years hence, relates via voice over, the time in his life when he placed morality ahead of personal safety. As such, the film has a structure that in Tennessee Williams’ definition, constitutes a “work of memory.” While this structure can be used successfully in film, for example, in “Stand by Me” or “Shawshank Redemption” (both based on Stephen King novels, by the way), it falls flat in Waiting for Anya. For one thing, the script has logical and temporal gaps, and the art direction at times seems sanitized with too much of a precious aesthetic. The result is that Jo’s memories create an idealistic bedtime story rather than a believable reflection of a grim and demanding time. Owing to these shortcomings, the film never rises above a TV movie-ish, after-school special morality tale, which, even for a narrative aimed primarily at a young audience, seems naïve by contemporary standards.

Certain structural elements and cinematic choices stand out as particularly poor. For example, there are excessively lengthy pans and traveling shots that reveal the scenic Pyrenees. These camera movements seem more suitable for a travelogue than a story narrative. To add to this romantic depiction of place and local culture is the work of the art direction team, which seems to have spent too much time in displaying period costumes rather than aiding in bringing the verisimilitude to life. This is particularly apparent with the attire of young Jo. His cape and black beret appear to have been taken off the costume rack and freshly pressed, while his personal grooming is nearly immaculate. As a result, he often possesses the appearance of a clothing model in a catalog. He is, after all, a young shepherd, and much of his work involves slogging through the meadows. As audience members, we may be asked to suspend our disbelief and appreciate the natural beauty and the innocence of youth, but during these moments the central conflicts seem placed on hiatus. In addition, the camera seems unduly transfixed on scenes of seated townsfolk, chatting around French provincial tables or going about the quotidian tasks that make up town life. But as “charming” as these situations may appear visually, they are too often visual padding — perhaps incorporated to compensate for an undeveloped script. As a result, even a young audience might get a bit edgy in its seats.

When the script is effective, the actors do a good job of inhabiting the time and place. Benjamin (played by Frederick Schmidt, the Jewish father of the titular Anya), provides a convincing portrait of an emotionally desperate man as he serves double duty: Hoping his daughter will miraculously appear while carefully monitoring the activities of the Germans on patrol. A German soldier, who is second in command, and referred to only as Korporal (Thomas Kretschmann, “Jungle”) is excellent as a man conflicted between preserving his role as a Jew hunter as he fails to hide his inner feelings as a wistful father and nature lover. Unfortunately, several good performances are not enough to raise Waiting for Anya to a level that would both render it an aesthetic whole, or a believable narrative. The inconsistencies simply can’t be redeemed. 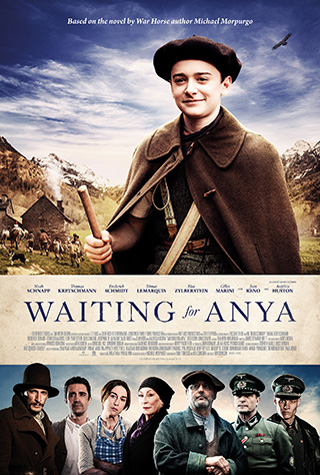