I am often chastised for expecting children’s film to be more than childish, but I think there are enough precedents to show that films which often appeal to younger crowds can also be pleasant for their parents (“Inside Out,” “Minions” and “Shaun the Sheep” come to mind in 2015 alone). That is certainly not my biggest problem with the newest 20th Century Fox/Blue Sky Studios production, The Peanuts Movie. First of all, if I had my way, I would change it’s unimaginative title to something like, “Good Grief, Charles Schulz Is Turning Over In His Grave, Charlie Brown,” or something like that.

The movie is a pleasant enough grab bag of everything people know and love from the Schulz comic strip centered around Charlie Brown. The question, though, is whether the four to seven-year-olds in the audience will fully grasp the intricate universe the artist/writer created around his titular character throughout the many decades. He made millions upon millions with his ability to draw for children and write basically for adults (Charlie was a hopeless loser and a neurotic, Lucy an amateur psychologist, Linus a philosopher, Schroeder a musical prodigy, etc., even little sister Sally spoke and acted beyond her years).

Younger children may have a passing acquaintance with the “Peanuts” gang from the annual holiday television specials and the massive amount of toys available, but presumably they aren’t as thoroughly versed people like this author who read the comic strip daily, bought the paperback and coloring books and grew up in a time when the characters were as famous as any in the land. So, after an appreciation of the early animation efforts (such as “A Charlie Brown Christmas,” “It’s the Great Pumpkin, Charlie Brown,” “A Boy Named Charlie Brown” and “A Charlie Brown Thanksgiving”), I was hoping the pen and ink style would be utilized in this feature film, but sadly, I was forced to endure a B-level 3D style that would result in a widespread condemnation had I not loved the characters so much. As it is, it’s very disconcerting to see this style take over my favorite animation artwork just to please a bunch of spoiled kids who wouldn’t appreciate the original handicraft anyway.

Just because something is new does not necessarily make it good — and this is proof positive of that.

The main story in The Peanuts Movie will appeal to many, nevertheless. Charlie Brown (voiced by Noah Schnapp, “Bridge of Spies”) is smitten with his new neighbor, the “Little Red-Haired Girl” (voiced by Francesca Capaldi, “Dog with a Blog” TV series), but all of his efforts to impress her end badly. Even when our blundering hero manages a top score on a test and is to be honored at a school assembly, he realizes that it is a mistake and his moment of triumph turns into an ethical quandary instead.

Meanwhile, Snoopy (voiced posthumously by Bill Melendez who, incredulously, had voiced Snoopy since the 1960s) discovers a discarded typewriter and begins to pen his own story and then gets into another imaginary World War I areal battle with the cursed Red Baron.

The nice thing is the plot continues to enforce that Charlie Brown is just an ordinary kid trying to find his place in an ordinary, but sometimes frightening world (while Snoopy, no doubt everyone’s favorite character, is allowed to engaged in his flights of fantasy). The movie, directed by Steve Martino (“Ice Age: Continental Drift”), wisely uses Schulz’s son and grandson as writers to keep the original feel and continuity of the characters alive and, admittedly, there is a simple heartwarming charm in much of the picture. I just wished they could have resisted the current animation temptation to make everything (even the most uninspired concepts) 3D ready and ruin one more piece of my own nostalgic remembrances. That’s all right, though, I am used to it and expect it to occur many more times to come. 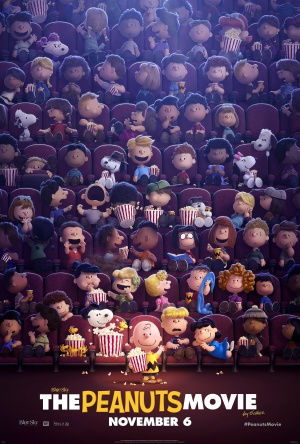