Who would have thought that a British claymation effort with no (intelligible) dialogue would end up being on of the funniest films of the year? Well, when the competition is “Spy,” “Trainwreck,” “Vacation” and “Paul Blart: Mall Cop 2,” among others, the victory wasn’t difficult to achieve. Still, there is certainly something to be said for the wonderful claymation and quirky British comedy of Shaun the Sheep, the by-product of such other animated films as “Flushed Away,” “Chicken Run,” “The Pirates! Band of Misfits” and the “Wallace and Gromit” series (and even going back to the days of “Gumby” and “Davey and Goliath”).

I have always appreciated this technique because it shows that the old-style way of making this type of movie is still popular, and everything has not been swamped by green screens and computer-enhancement. The effect was honored with the Best Animated Short Feature (“Creature Comforts”) Academy Award in the early 1990s, and director Tim Burton would use the process in “The Corpse Bride,” and later in “Frankenweenie.”

Here, as written and directed by Mark Burton (“Gnomeo & Juliet”) and Richard Starzak (“Shaun the Sheep” TV series) and based on the 2007 television show, the same creative artwork envelops the same lovable characters who find daily life on the farm a grind and long for just one day off. This is cleverly illustrated with a montage that shows everything droning on day after day after day (with the exception of the rooster, which finds new ways to wake everyone up each morning).

Shaun (voiced — if one can call grunts and bleats a “voice” — by series veteran Justin Fletcher) is what Monty Python described as the “most dangerous of animals — an intelligent sheep.” One day, he sees a bus in the country calling for folks to take a vacation, so he plans the event with Mission Impossible-like precision, drawing the intricate idea on a chalkboard and making sure the farmer and his dog, Bitzer (both voiced by “Shaun the Sheep” TV series alum, John Sparkes) are duly distracted. Unfortunately, while enjoying some TV and snacks, the dog (who was thrown off the trail by a bribed duck) catches them red-handed (er, red-hooved).

This leads to the farmer being accidentally whisked to the Big City, losing his memory and becoming a famous hair stylist (promoting the “Sheep Look”) overnight. Meanwhile, the animals are all in tow trying to find him because without him, they cannot eat (they’re smart enough to wear disguises, escape from animal control (called “animal containment” here; ya gotta love the Brits) and procure several rescues, but open a bag of feed, never.

Anyway, in the Big City, they are all captured by the dogcatcher from Hell, Trumper (voice of Omid Djalili, “The Love Guru”) and “contained,” but being the clever lambs that they are, manage to get away and, with the help of several other animals, a Trojan horse and a scene taken from “Police Academy,” give Trumper his comeuppance. Seeing that the boring life of sheep farming needs a little jolt, the farmer then proposes to have a little more fun with his flock and the daily routine is interrupted with picnics and just plain fun.

And while Shaun the Sheep is made for children, the quips during the adventure — many of the British upper-class twit variety — come fast and furious and will mostly fly way over their heads. Parents, however, should appreciate the writing and nuances; look for some clever scenes featuring warped fashion sense, TV news and social media as well as some humorous road and shop signs in and around the small metropolis. And yes, there are even a few fart jokes, but this being English and all, even those are shown in the best of taste as possible.

Shaun the Sheep is extremely compact (with a running time of just 85 minutes), so prepare for the action to go on pretty much non-stop. And with a laugh ratio that’s far above most other pictures — live or animated — expect a fairly good time at the metroplex. 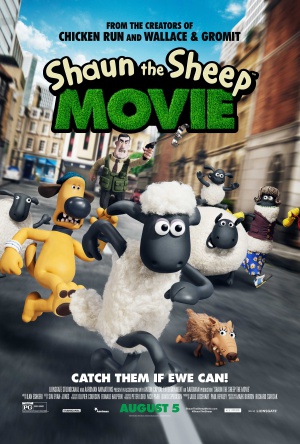