“And we’re lost out here in the stars. Little stars, big stars, blowing through the night” — Kurt Weill

Though the consensus of mainstream science is that ghosts do not exist, people’s shared experiences throughout history tell us that disembodied spirits do wander the earth, unfortunate souls who are unable to let go of their attachments to the earthly world they just left. David Lowery’s (“Pete’s Dragon”) touching meditation on life, love, and impermanence, A Ghost Story, sees life not from the usual perspective of the one left behind after a loved one dies, but from the vantage point of the dead, the ghost who remains attached to the physical world, looking for completion and release. A Ghost Story has little dialogue or plot, and the experience of passion and regret only comes through in a very limited way, yet a gentle mood of sadness, longing, and loss permeates the film and gives it its character.

In the film which is shot in a 1.33:1 ratio, a format that creates the experience of living inside a box (the way many of us do), Rooney Mara (“Pan”) and Casey Affleck (“Manchester by the Sea”), known as M and C, live together in a single-story house in suburban Texas, an ordinary house without many distinguishing characteristics. It takes its meaning in the film from the memories it holds of families and friends, of children decorating a Christmas tree, of the tinkling sound of a piano and the whispering of birds in the early morning, a panoply of life and love. As M and C proclaim their love and talk about their future plans, the idyllic scene is brutally interrupted when C is killed in a car accident and his body, covered by a sheet, is identified by M at the morgue.

C’s body, clothed only in a sheet that completely covers his body with two holes carved out for his eyes, rises from the slab and calmly walks out of the room, heading back across fields to the house with which he is familiar. Mara, devastated and alone, has no one to turn to communicate with and, in one memorable scene, expresses her grief by eating an entire pie in one take that lasts more than five minutes, an event that can try the patience of even the biggest devotee of art cinema. As the expressionless ghost wanders around the house, the film becomes silent except for the exquisite score by Daniel Hart (“Ain’t Them Bodies Saints”). At one point, the ghost sees a fellow traveler wearing a sheet with a floral pattern in a window across the street.

Since we don’t know how ghosts communicate and apparently texting is not available, Lowery provides subtitles of what is being said, which is not much. They don’t talk about the weather or how terrible humans are. One ghost simply says that she is waiting but doesn’t remember who she is waiting for. We know that there is a note hidden by M in a crack in the wall which the ghost works at retrieving, but finding the note is only one reason the ghost hangs around. He wants to be there for her even though he knows she is going to move on. When M does move out, the ghost remains attached to the house, traveling into the future to haunt a future resident, a Hispanic single mother (Sonia Acevedo, “The Jonas Project”) and her two children (Carlos Bermudez and Yasmina Gutierrez) who are enjoying life until big G, upset with their intrusion, does his poltergeist thing, throwing dishes around and causing both general and specific chaos.

Remorseful, the ghost returns to the distant past when a family who populated the site when it was nothing but grassland ends up with arrows stuck in their ribs, courtesy of the local Indians. A modern office building, also in the future, is his final destination, but, not feeling too happy there, he jumps out of a window from high above the street, but has as much success killing himself as did Bill Murray in “Groundhog Day.” At some point, the ghost attends a party dominated by an inebriated philosopher (Will Oldham, “Wendy and Lucy”) who thinks he has something very profound to say and morosely delivers a lecture on the idea that nothing lasts and that even the Earth will die as well as perhaps the entire universe.

Lowery has said that while he [Oldham] is basically saying, “Live each day like it’s your last,” he wants people to come away from A Ghost Story feeling like there’s a little more to life than just that. I would suggest that there’s a great deal more. In fact, the speech misses the point of impermanence and non-attachment. To live in non-attachment means that we recognize there was never anything to attach or cling to in the first place, that our separation from others is an Earth-bound illusion and that we are always connected to all things at all times, an experience that leads to joy rather than despair.

Yes, the swift passage of time can be scary and things do fall apart but, as the poet Rilke says, “This hand falls, nor yet this other. Falling all enfoldeth. Yet is there one who all this falling holdeth with unending gentleness?” Even ghosts must eventually let go. 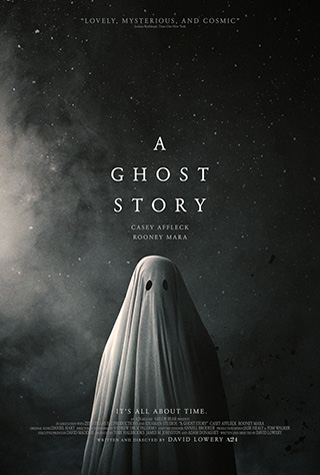