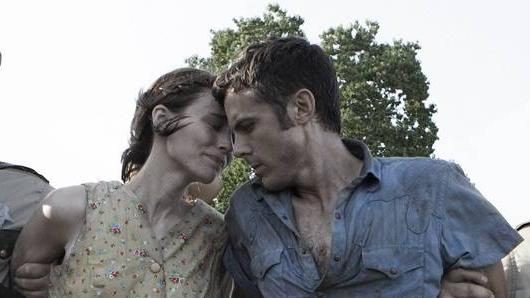 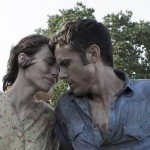 A dream-like atmosphere pervades David Lowery’s Ain’t Them Bodies Saints, a nostalgic tone poem that hints of Terrence Malick with its sweeping vistas and soft voice-overs. Though the title card that opens the film says, “This was in Texas,” there is no delineation of time or place, and it is left to the viewer to figure out when the “was” was. Though the film feels derivative, at times suggesting “Badlands” and “Of Mice and Men,” Lowery’s determination to restore the mythic beauty of the Old West is ultimately his own vision. The film opens on a country road with two lovers Ruth Guthrie (Rooney Mara) and Bob Muldoon (Casey Affleck) engaged in a quarrel as they walk with Ruth in front and Bob trailing behind.

When Ruth hears him say that he wants to go off on his own, she tells him she is pregnant and he explains that he did not mean he will leave her, just that he wants them to rob banks together without having anyone else involved. Having just committed a bank robbery, the two are cornered by police and, in the subsequent shootout, Bob’s partner is killed and local sheriff’s deputy Patrick Wheeler (Ben Foster) is wounded. To protect his pregnant wife, Bob confesses to the shooting even though Ruth pulled the trigger and is given a life sentence. Hoping for the day when they will be together again, he speaks to Ruth daily through written letters, conveyed by voice-overs spoken in wispy Southern tones.

After several years, Bob escapes and heads back to Texas to find Ruth and Sylvie (Kennadie and Jacklynn Smith), the daughter he has never seen. Attempting to elude capture and reunite his family, he visits Skerritt (Keith Carradine), a former employer and father figure. Skerritt provides Ruth with a house close by so she can look after her baby girl, but he still blames Bob for the death of his son in the police shootout. He insists that Bob stay away from Ruth, threatening him with dire consequences if he doesn’t. Supporting the fugitive’s effort to hide from the law is a bartender friend known as Sweetie (Nate Parker) who gives him shelter and throws the tracking police deputies off target, yet Skerritt and Patrick are not the only obstacles for him.

He must also contend with a group of bounty hunters he does not know and, in the shootout that follows his discovery, he is seriously wounded. Meanwhile, life has gone on for Ruth. Sylvie is now four years old and Ruth must deal with every day practical realities. Torn between love for the father of her child and her desire to move on to a new life with her daughter, she has formed an innocent relationship with the officer she shot, telling him that she does not think Bob will be returning to her. Patrick, a gentle soul who may or may not know that she was the one who pulled the trigger, looks her in the eye and says, “Whatever it is you’ve done, when I see you with your daughter, all I see is good.” 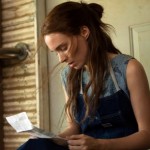 Letters from the past.

In a performance that is strong and natural, Mara sparkles in her role as the woman who wants to be freed from the past but has few options, knowing that wherever she goes she will be pursued. Casey Affleck convinces us that he truly loves Ruth and wants to be with her but does not seem to fit the mold of a hardened outlaw. Problematic is Lowery’s saintly portrait of a mother who exudes purity despite her criminal past and a child who never cries, whines, or otherwise seems the slightest bit upset.

Ain’t Them Bodies Saints is a slow-paced film that uses dark lighting and sparse dialogue to capture a mood of pervasive longing. Under the guidance of cinematographer Bradford Young and the support of Daniel Hart’s melancholy score, it is a film that engages the senses and draws us in with moments of poignant beauty. Ultimately, however, the sketchiness of its characters results in its failure to truly engage the emotions, making it, for me, a film to be admired rather than loved. 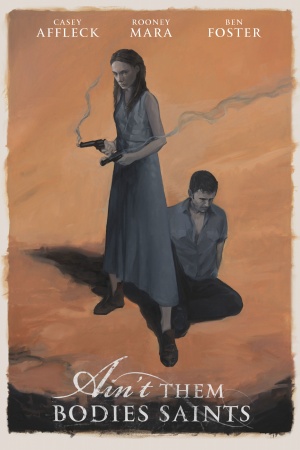