For Iranian-born Swiss director Barbet Schroeder, venturing into the picturesque Mediterranean paradise that is Ibiza is something he is familiar with, shooting his 1969 debut film “More” in the country, now famed for its exuberant party life and strong love dedication to the hypnotic epidemic of electronic dance music. It is in this unsuspected concept that his 2015 film Amnesia — a French-Swiss co-production — bases its foundation for an intimate and daring exploration of an uncanny friendship between two Germans in the early 1990s, after the fall of the Berlin Wall. The reasons for the pairs escape to a coastal villa are extreme in difference, their experiences of life, love and war mends a generational gap of the unknown.

Martha (Marthe Keller, “Hereafter”) lives in near to complete exile in her beach-front home. A woman so disgusted by her own heritage and nationality, Martha’s poisoned thoughts of Germany enables a stubborn refusal to speak in her mother tongue. Along with an untouched cello elegantly placed in a corner played by a former Jewish lover, as far as background development goes, Schroeder’s Martha is endowed with a compelling, dark and intriguing energy that propels the films’ otherwise tame plot. Martha’s carefree spirit, whilst entirely enchanting, masks immense guilt and pain. Even though she was not a victim in the atrocities of the Nazi Regime, her experience as a non-Jewish German living during the war enrages her. Having never once returned back to Germany, she only socializes with a select few residents in Ibiza, conversing only in any language, other than German.

Martha’s life of solitude is pleasantly interrupted by the arrival of 25 year-old Jo (Max Riemelt, “The Fourth State”), an aspiring electronic music composer from Berlin who, quite frankly, bursts into Martha’s eerily quiet home. Cradling a badly burnt hand, Martha’s precision in action to his injury ignites an endearing friendship. She rocks the boat, literally, in one of their first outings, where the boundary of innocent friendship and flirtation is tested.

Jo dreams of landing a spot at one of Ibiza’s most talked about clubs, Amnesia, a techno dance haven where crowds of locals and tourists gather to embrace a new genre of music composed by looping, sampling and replaying. This modern method of composing fascinates the classically trained Martha who surprisingly falls in love with the trance-like rhythms Jo creates in his room. Inspired by sounds of Ibiza — fauna, crashing waves, rushing winds, jars — Martha becomes wide-eyed and simply fascinated like a small child over Jo’s creation made from mundane house objects, and a familiar bird’s tweets.

Although a larger proportion of Amnesia rests on Jo’s career in Ibiza, his character is second to Martha — he, at times, only solely acts as window to peer into a woman’s life so hidden and fragmented. Without those vital moments of interaction between Jo — who adores his grandfather who was a guard during a war — and Martha, there’d be no exposure of her enduring heartbreak that is so deeply composed within her character.

It’s an odd viewing experience watching two German-born actors speaking in English. The roots from their nation at the tip of their tongue, their annunciation is broken down by basic English. On Martha’s part, it’s her desperate desire to forget the tragedies of her nations past. For Jo, a compliance to follow through a friendship with a woman whom he adores. But this barrier of language makes the issue more obvious. Tackling a prickly topic like World War II in a time period like the 1990s, an era of rebirth, Amnesia wants to establish a clear frame of both needing to remember and considering the other sides of stories, clouded by love or hate. In an otherwise beautifully pieced and shot film, there were a few key scenes where the must-needed drama was simply lacking, however. Emotion was taken down several notches in instances where the characters should have imploded with rage and shock. If performed with that needed fire, and maybe spoken in German instead of a tamer English, these shattering moments would’ve had the potential to be heart-breaking, but instead felt like an afterthought.

The construction of these characters by Barbet Schroeder, Emilie Bickerton, Susan Hoffman and Peter F. Steinbach is still to be commended. They represent Germany’s past and present, with Jo’s ignorance from blinded love for his grandfather marking an important space in the significant generational gap between himself and Martha. A slow progression towards resolution — or more rather, peace — Amnesia is a thought-provoking piece on the past that grapples with what we allow ourselves to remember and forget, mixed with the refreshing addition of electronic music as the bridge. 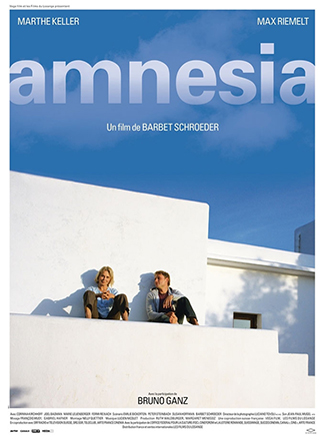