In the midst of the devastation that was Hurricane Sandy back in 2012, New Jersey’s notorious play land, Atlantic City, was stripped to a bleak and torn terrain. First-time director Emanuele Della Valle uses this as a backdrop for his crime-drama film debut, Wetlands. The grey wasteland welcomes a once rogue Philadelphia cop, Babel (Adewale Akinnuoye-Agbaje, “Suicide Squad”), back to the gritty underbelly of the usually tourist soaked boardwalk, as his quest to re-unite with his estranged ex-wife and daughter crosses paths with a corrupt narcotics case in the murky New Jersey wetlands.

Della Valle excels in capturing a rare aspect of Atlantic City; its lonely winters. Starved of tourists and sunshine, the locals who inhabit the near-to-deserted pavilions still occupy its waves and sandy beaches. Kate (Jennifer Ehle, “Fifty Shades of Grey”), spectacularly portrayed as a troubled drug-dealer looking for an escape, and her bohemian girlfriend, Savannah (Heather Graham, “My Dead Boyfriend”) play some key residents whose surf and drug culture lifestyle fully embrace the typical chilled stoner mentality. The golden haired Savannah just also happens to be Babel’s ex-wife, adding another twisted connection into a tangled web of relationships. However, Kate’s second job dealing heroin lands her in Babel’s sights as the major players in the crime ring appear clearer.

In the dead of night, drenched in the rain, she skates around the boardwalk and to the docks, keeping her business sealed under the curtain of nightfall in order to fund her dreams of flying to Hawaii and opening her very own surf shop. Kate also provides the films on-again-off-again narration, an element that one might forget is there as it is rarely utilized and when it is, in the most questionable of scenes. This among other narrative devices, including a handful of brief flashbacks, cast in black and white, that glimpse into Babel’s sordid, shameful past in Philadelphia offer his past as another window to peer into.

So here Della Valle plates up two broken protagonists fighting for the position of underdog to an audience being dragged through both of their personal inner turmoils. Surely two struggling underdogs can’t come out on top. But the tug-of-war is distinct for the audience; Della Valle follows Kate around on her board, and Babel in his cop car. Their journeys around the city colliding and woven by not only the factor of family, but the case, binding them together. The two bond, lash-out, and inevitably stumble into darker deeds, their past sadly catching up to them here in the present. Babel’s fractured relationship with his angered daughter, Amy (Celeste O’Connor), adds another layer on the quest for redemption by desperately attempting to patch together wounds so deep that his daughter’s resentment is undeniably justified.

Aside from the intricate connections of our primary characters, the grim aesthetic of the desolated city is personified by a handful of archetypal characters one would expect to see in a film such as Wetlands: A sleazy, corrupt detective, Paddy Sheehan (Christopher McDonald, “Not Fade Away”), an abusive, manipulative user (Louis Mustillo, “One for the Money”), grimy strip clubs, there is a near-perfect formula of genre that drifts into film noir territory. The carefully crafted cinematography aids the eerily depressing landscape of the storm ravaged surroundings, engulfing the screen in pale greys and murky greens. The film follows a steady rhythm until the discovery of a body in the wetlands propels the drug case into something far more sinister and corrupt.

As these characters struggle with their inner demons from their hard pasts, it’s difficult to form any emotional attachment or become invested in their journeys toward a peaceful resolution. This may be the result of Della Vella composing multiple underdogs to root for; splitting our empathies with numerous characters takes away the focus from one main protagonist. Add about three accompanying sub-plots and the on-going media coverage of the storm — compressed into an hour-and-a-half of screen time — Wetlands becomes an intertwined distraction from a simple story of crime and corruption in a small community that’s seen better days. 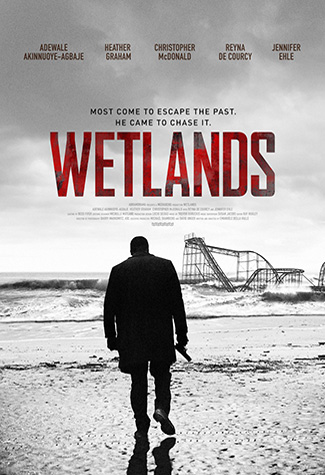