Guatemalan Indigenous Leader and Nobel Peace Prize winner Rigoberta Menchú Tum said, “We are not myths of the past, ruins in the jungle, or zoos. We are people and we want to be respected.” Unfortunately, however, Indigenous people have been the subject of racism and discrimination throughout history. Massacres, forced-march relocations, the “Indian wars,” death by starvation and disease form a depressing legacy of man’s inhumanity to man. Inspired by the personal experience of director Amanda Kernell’s grandmother, the deeply moving Sami Blood is about what Kernell has called an “untold” story and a “dark chapter” in Swedish history. She is referring to the oppression of the Samis, also known as Lapps, an indigenous people who live in the far northern areas of Norway, Sweden, Finland, and Russia.

Shot by cinematographers Sophia Olsson and Petrus Sjövik, the film is set in Sweden in the 1930s when the rising tide of nationalist fervor dominated Europe and led to the Nazi’s embrace of Eugenics and the theory of the master race. Sami Blood opens in the present day, however, as ninety-year-old Christina (Maj-Doris Rimpi, “Isdraken”) returns to Lapland with her son and granddaughter to attend the funeral of her estranged sister. Traditional yoik-singing does not prevent Christina from becoming morose and withdrawn, retreating to a hotel by herself. The film then flashes back eighty years to the time when Christina (now played by Lene Cecilia Sparrok), then known as Elle Marja, was a precocious 14-year-old girl living with her sister Njenna (Sparrok’s own sister Mia Erika) and her recently widowed mother (Katarina Blind), engaged in reindeer herding.

As in the US and Canada where native children were sent to residential schools where their language, religion and cultural beliefs were often the object of ridicule, the sisters are sent to a special boarding school where they learn the hard lesson that the world regards them as lesser human beings. The Sami girls are dismissed by local Swedish teens as “circus animals” and “filthy Lapps,” and are subject at school to being measured and photographed to prove a physical basis for their inferiority. While singled out for her learning ability by her deceptively supportive teacher, Lärarinnan (Hanna Alström, “Kingsman: The Secret Service”), Elle Marja’s inquiries about becoming a teacher meets with the reply that Sami’s have small brains and are not capable of functioning outside of their own community. “Studies have shown that your people can’t get by in town . . . you have to stay here or you’ll die out,” she says.

In spite of her humiliation, Elle Marja is able to dream of a more productive future. It is a future, however, that will cause her to turn her back on her family and her heritage, a betrayal that will mark her entire life. In one scene, Elle Marja, who is trying to pass herself off as a “normal Swede,” blurts out to her sister, “Get away, you filthy Lapp.” When she meets Niklas (Julius Fleischanderl, “Young Sophie Bell”) a good-looking Swedish boy from Uppsala who does not know that she is Sami, her dreams of escaping from the school begin to become real. After her mother refuses to sell a reindeer in order to pay for the education Elle Marja requires to become a teacher, she changes her name to Christina and pursues her relationship with Niklas.

Showing up at his upscale home, Christina untruthfully tells his mother that Niklas said that she could stay with them. In spite of their growing connection which includes staying overnight in his room, he does not defend her when his mother discovers her to be a Sami and she is asked to leave. She remains determined, however, to start a new life regardless of the barriers she faces. Though Sami Blood covers familiar ground, the pain caused by discrimination can never be routine. What elevates the film to a different level, however, is the quiet but fiercely determined performance of Lene Cecilia Sparrok as Elle Marja/Christina. While the film is about oppression, it is not polemic, but instead a human document that transcends the limitations of its environment and makes a universal statement about the longing to fit in, the fear of isolation, and the conflict between the life we are born into and the one we choose for ourselves. 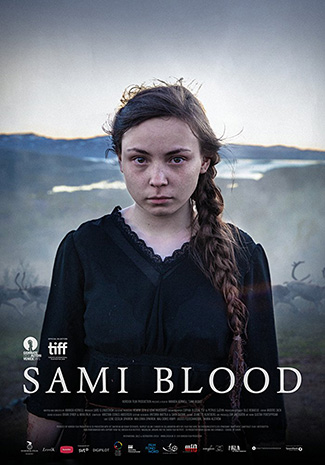