It’s pitch dark. We see nothing. Only hear hollow voices as routine questions are asked and forms are filled. No context whatsoever. Yet we slowly and silently find ourselves rooting for the individual answering the increasingly absurd questionnaire. That’s when we find ourselves rooted in the character that will be leading the whole film. That’s Daniel Blake, losing his nerve in I, Daniel Blake as we meet him in a world that he seems to have just met himself, a world of “if you could only just . . .,” which means no justice at all, neutral to the point of being coreless, tone-deaf and blind, but not in the way the Lady’s portrayed, rather the one that leads lurid loss, the one that renders everybody anonymous. And that’s who we meet first, an anonymous chap who knows not why or how he ended up in such mess.

It was his heart — it failed him. The exchange in the dark was testing his eligibility to keep receiving his benefits after having suffered a heart attack. For the first time in his life, he can’t work. Now, this 59 year old widower who only knows the value of his hands needs government support, which, as is predictable had we listened to the opening scene, they’re taking away for no good reason. With no income, with the savings of someone who’s been living paycheck to paycheck all his life, he’s at the verge of homelessness. Yet he appeals the government’s decision, and boy is it meant to wear him off!

As Daniel (Dave Johns) painfully has to realize, exercising his right to appeal a governmental decision is like falling into the rabid hole of red tape. We watch him, with our anger in sync with his, with his pain aligned to our empathy, falling down this hole as if Sisyphus were being transferred to Amerika without prior notification. He falls into a world wherein everything is meant to work unless you mean to use it. He’s the one who’s meant to be working, despite his physician’s best advice — an accident in this world, a fall, means getting into a place where nothing makes sense and in which no one bears direct responsibility for their actions. He shall hear from the mythical “decision-maker,” whose call he waits in patience (then impatient), as though he were waiting for the Godot of bureaucracy. It’s only a voice. The maker’s got no name, no face, no physical presence. Yet his actions are almighty — at least in what concerns Daniel’s immediate future, which is the only one he knows.

Before the fall, everything made sense to Daniel, including having lost his wife too soon. The rules of this other world, though, are impervious to his understanding, for they are not a matter of his concern. He understands kindness; he understands working as a matter of caring for what you do, even if that means being a humble joiner or a modest carver. That’s as far as his understanding goes; that’s where concern is supposed to come from. But in this other world, concern means incumbency, something of which he’s excluded, unless he follows the rules set for him, where the physicality of the body ebbs and the immateriality of the virtual flows. He knows nothing about this place. He’s never used a computer, let alone the web (never the metaphor best employed!), in the trap of which he falls to be gradually left, disenfranchised, isolated, and with no human connection.

It is only natural thus that he helps out of the kindness of his soul another lost transferee, exile in this world of files, and takes her under his wing. A young mother of two, Katie (Hayley Squires, “Blood Cells”) is at the brink of breaking down when Daniel comes in. Fits like a glove. Here’s another world he can make sense of, honing her hurt home or babysitting her two talented tads. She’s desperate, hungry, rationing every inch of food for her brood (and her human angel, who, of course, also eats). This relationship adds another layer to the character of Daniel and yet another to the film at large, as it weaves a friendship emerging from frustration and need that’s then sustained on not knowing too much of each other. When this latter fails, the friendship is at its frailest — yet it’s also at its most robust.

A man of solutions, Daniel has been suddenly thrown at the center of a system of problems. He is, as all in his situation, constantly confusing heart with guts, as this is what this system does, for a heartless system is nothing but an emotional knot.

So how unfortunate it is that his heart has failed in a heartless place? That’s where Ken Loach takes us with masterful plainness. Making use of his naturalistic palette and the wisdom of so many years in the world (of film), he introduces us to a man who, the more we know him, the more he warms our hearts. Daniel is one of Loach’s best characters (perhaps at the other end of the spectrum with his indelible Billy Casper): Tired, aged, grumpy, lonely, and lovely, kind, pious and staunch — the kind of man who cannot stand two acts in a farce without falling off the stage. And Dave Johns gives a powerful performance at that. In his discreet smile and quiet demeanor we see the dignity of an honest man in all its magnitude, the unassuming pride of someone who hasn’t thought too deeply on who he is, but who’s quick to recognize himself in the mirror.

It is no surprise then to see him stepping out of the farce he’s been forced in. “I’ve got a limit,” he tells to possibly the only human being left at the welfare office who tries to dissuade him to play by the book, to fake for his own sake. But he rather lose everything than fake another ounce. He can’t. Like all great neorealist heroes, he’s not suited for acting, and that’s where all the best performances are tailored. What Daniel has is what Loach has shown during all these years: Self-respect. What a timely thing to assert at Britain’s present time, when guts got the best of them and rage took away their common sense. The worst kind of blindness.

The place wherein Daniel ages and Katie tries to raise her children has no room left for honesty. The way in which they care for other people is transparent to the point of monotony — digitally outdated. There’s no room here for caring, not in that way. Caring starts and ends in oneself and then there’s everything else, the realm to which obligations extend, accountability ends, which is where invisible people take very visible decisions. These decisions are mostly designed to undermine anyone who dares to complain, to speak up, to care for other people. These are instances, moments, instants that kill you little by little, break you, till you lose the one thing that made you care: Your self-respect. “Don’t show me any more love cause it’s gonna break me,” says Katie to a Daniel who has gone too far in caring for her. Love, if not self-interested, has no place in this world.

Daniel’s house is thus emptied bit by bit. It’s made all room and nothing in it. This house is too similar to Loach’s Britain, and much more so to the one in which he’s filmed one of his best works, nearly a masterpiece — though too near to what is going on to tell, for its relevance eclipses its mastery.

When the film was introduced last week, the presenter pointed out that this is a pre-Brexit piece, and wondered what would Loach have to say about it. Yet, after watching it, I think I, Daniel Blake is the best response to Britain’s Great Folly. Here’s a place that’s driving its most vulnerable citizens mad with obese austerity measures. Here’s a man who dares to demand his rights and stand for himself, who asserts his “I” as proud as it is fruitless. Here’s a system that with austerity elicits extreme measures. And what else was Brexit then? It’s not to justify the vote, but to understand the anger behind it. Hardworking people divested of self-respect. For without self-interest, where’s the good in respecting oneself? That’s what we learn.

I, Daniel Blake is neither a declaration nor a statement. It is an affirmation. The affirmation of a character who is in the darkening position of being able to assert himself at a place where no one will ever care to listen. 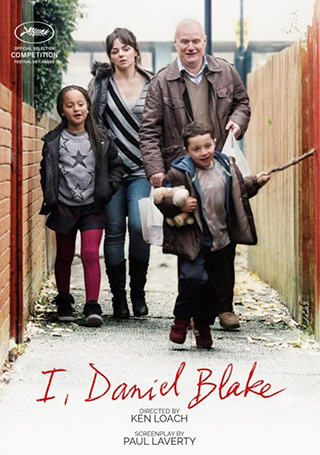