The cinema of Kosovo, or indeed Eastern Europe in general, does not receive much attention from Western viewers. This is due to the difficulties of production, distribution and exhibition, all of which are daunting for a filmmaker in any part of the world. It is therefore heartening when a film from this under-represented area does receive attention, as in the case of Home, the second film from writer-director More Raca. Home premiered at the Raindance Film Festival and will hopefully become available to a wider audience, as it is both an important social document and a fine piece of cinema. It can be difficult to find pieces of work that combine both these features, as a political message can easily overcome storytelling, but with Home, Raca maintains this balance by focusing on the personal story, the political commentary neatly interwoven through the length of this short film.

The title Home is somewhat ironic, as it is essentially a story of being homeless. Rather than being about life on the street, however, it portrays in stark and unflinchingly bleak detail the lack of options for women. Hava (Xheljane Tërbunja, “The Albanian”) is an unmarried woman in her thirties, whose parents have died. According to tradition, the estate is divided between her brothers, and she is entitled to nothing. Her role is to get married and have children, with her husband supporting her. Hava rails against these social expectations, but her options are very limited. She works in a restaurant with no apparent prospects for career progression, and her brother Qazim (Sunaj Raca, “Shok”) insists on finding her a husband. While other options briefly appear, contingencies and requirements decided by men continually press upon her, both directly and indirectly, until she is left with nothing.

The film could be considered a piece of Kosovan realism, as like British social realism, its focus is on social-economic reality, with no sudden opportunities or salvation appearing. For a brief time, something truly positive and hopeful appears, but it is quickly revealed to be another form of patriarchal oppression that Hava vehemently rejects. Pleasingly, the film is far from a piece of misandry, as rather than presenting all men as bastards, the antagonist to Hava is the institution of patriarchy itself, an endemic social issue rather than something limited to individuals.

The men in the film, including Qazim and a potential landlord (Veton Osmani, “The Forgiveness of Blood”), are operating within the strictures of long-held beliefs that they have no reason to oppose. Similarly, Hava is no activist, simply a victim of traditional and societal expectations. She may object to the demands that she marry and accept the judgment of her brothers, but she makes no concerted effort to resist other than telling Qazim she does not want to marry anyone and angrily wipes off the lipstick he insisted she wear. This scene between brother and sister is particularly powerful, as it is the most defiant Hava is in the entire film but, crucially, her defiance is in vain. Hava cuts a striking figure in this moment, as the image of her with lipstick smeared across her face gives her the appearance of a sex attack victim, and in a way she is. Qazim may not have physically assaulted her, but his attempts to marry her off and eventual rejection of her altogether are no less an attack upon her autonomy or denial of her identity.

Further adding to her outcast status, Hava appears to be a lesbian, as she meets clandestinely with a girlfriend (Florentina Ademi, “Donkeys of the Border”) who informs her that they cannot see each other any more because an unnamed man has returned. He may be the father or brother of the girlfriend, but her children suggest that he is probably her husband. Therefore, here is another woman trapped by societal pressures, unable to express her own sexuality except in secret and when her male overseer is absent. In one heartbreaking scene, Hava pleads for her girlfriend to run away with her, knowing full well that the girlfriend will not because of her children. Once again, options for Hava are closed off because of the restrictions placed upon women.

Despite all this grimness, the film is not an entirely dour experience. Raca and director of photography Latif Hasolli use deep focus long shots to capture the Kosovan capital, Prishtina, its towers and minarets outlined against the night sky in stark beauty. Indeed, much of the film is beautiful despite a lack of stylistic flair, as the steady camera and flat lighting convey the everyday as eye-catching. Even a train track in a rundown part of town is gorgeously rendered, the deep shadows contrasting with the pale bricks while shallow focus turns the lights of moving cars and trains into roving specters in the background. Within this bleak beauty, Hava’s face remains largely unchanged, a stoic look of long suffering fixed upon her features. Home is far from sentimental, but it is deeply sympathetic towards its protagonist, encouraging similar sympathy on the part of the viewer, who is as unlikely to come up with an answer as the film itself. 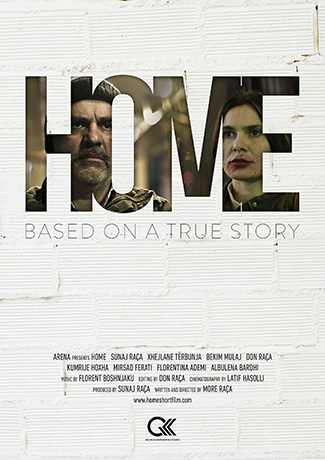