In 2016, the Freedom in the World report named Tibet as one of the most repressed countries in the world. Since China occupied Tibet over sixty years ago, hundreds of thousands of people have been tortured and imprisoned. Although the political conflict between China and Tibet plays a part, Moon Chang-Yong and Jin Jeon’s documentary Becoming Who I Was is not a film about the oppression of a minority, but about the universal bonds of devotion and sacrifice, a connection that transcends country and religion. Winner of the Grand Prix for Best Feature Film (Generation Kplus) at the Berlin Film Festival and shot over a period of eight years, Becoming Who I Was is the story of a young Buddhist, Padma Angdu, who at age six is discovered by high-ranking lamas to be the reincarnation of a revered Tibetan monk.

Unlike the documentary “Unmistaken Child” by Nati Baratz or Martin Scorsese’s film “Kundun,” we do not witness the process in which Angdu is designated by the lamas to be a Rinpoche, but accept the truth of the discovery. The film opens as eight-year-old Angdu is being brought up in a monastery in the isolated mountainous region of Ladakh in northern India. Though he is under the direction of a head tutor and must study hard and adhere to a strict regimen, Padma is an ordinary boy with an engaging smile, full of joy and playfulness who always stops to give his blessings to others. Sadly, however, because he has not been claimed by his former disciples in Kham, Tibet, Angdu is expelled from the monastery in Ladakh and must live with his godfather, the elderly Urgyan Rickzan, a lama and the only doctor in the village.

Urgyan sacrifices his practice in order to provide food and shelter for Padma, to make sure that he works hard on his studies, and to offer the dedicated concern of a teacher and substitute parent. Even though Padma has a higher rank than his guardian, the distinction never gets in the way of their relationship. When the boy becomes twelve, he and Urgyan decide to undertake the treacherous journey to Tibet to reconnect with his disciples at his old monastery. The journey, on foot, bus and train (and hitchhiking), becomes an odyssey of transformation. Though they encounter extreme weather conditions of cold and snow with frostbite on their faces, there is an atmosphere of serenity and their connection becomes deeper.

During a stop in a small village close to the border, the travelers are invited by a shopkeeper to come into her shop to warm up and Urgyan buys some colorful gloves for Padma. When the woman learns of their goal, however, she advises them not to continue because they will be turned back at the border and may be risking their life. Becoming Who I Was is about a pilgrimage, but it is more than that. It is a story about a quest to discover our true identity, a longing for intimate connection, and the search for unconditional love. A film of understated beauty, the experience can best be described by the vision of Lakota Black Elk when he said, “And while I stood there I saw more than I can tell and I understood more than I saw for I was seeing in a sacred manner the shapes of all things in the spirit, and the shape of all shapes as they must live together like one being.” 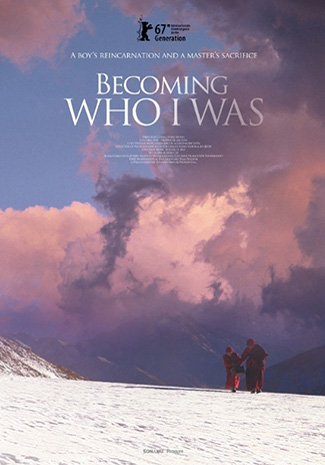