On its face, Where Is Kyra? tells the story of an unemployed divorcée, Kyra Johnson (Michelle Pfeiffer, “Dark Shadows”), whose life falls into further disarray following the death of her mother. Struggling to make ends meet, her judgment clouded by grief, she soon resorts to desperate measures in order to avoid being evicted from the New York City apartment they shared.

Director Andrew Dosunmu structures his film as a mystery in the way the mere act of being alive is a great mystery. In between scenes of Kyra pounding the pavement searching for work, the camera cuts to an unidentified elderly woman — adorned with a hunchback and a cane — slowly struggling along city streets. She is mostly shot from behind and, even when observed head-on, the combination of scarf, prescriptive fitover sunglasses and knit hat completely obscures her face. Her feeble steps are accompanied by the clack of cane hitting pavement and Philip Miller’s ear-splitting score. “Who is she?,” we wonder.

Before long, the audience starts to notice that the elderly woman and Kyra carry the same purses on their walks, and the same desperation in their eyes. Her ill-advised plan and questionable motivations come into view. Kyra’s neighbor and new boyfriend Doug (a tender and almost unrealistically kind Kiefer Sutherland, “Melancholia”) remarks on having seen a woman bearing a striking resemblance to Kyra’s mother, Ruth (Suzanne Shepherd, “Delivering the Goods”), while driving his cab. Even though we know Doug’s claim is not far off, there’s this darkly funny moment where Kyra downplays his confession by admitting that she also “sees” her mother throughout the day, effectively gaslighting him.

Under dark glasses and false disguises, Dosunmu’s film (based on Darci Picoult’s script) offers a social commentary on the descent into poverty and diminishing opportunity that afflicts the aging, especially women and people of color. The film wrestles with the distinction between committing a crime and being a criminal, especially when — as is often the case — people are failed by the systems and institutions in place to provide protection and assistance. It catches in the inertia of a bad idea and the way in which these things tend to spiral beyond control. Kyra tries to come by it honestly, willing to pick up any odd job, and then this opportunity presents itself just when she’s stripped of other options. Emotionally and physically stripped down, Kyra defrauds the government and herself by literally becoming her mother and cashing her pension checks. A wonderful early scene cuts between them each doing their hair, applying make-up, readying themselves for the day ahead. Later, when Kyra assumes her mother’s identity for the last time, her process is intercut with her mother’s nearly identical one. It plays like memory, where the past, present and future unite for a twisted farewell.

It’s no mystery that women of a certain age become invisible to society. When beauty and desirability become currency, this is what happens when it fades. It’s notable that one of Kyra’s odd jobs finds her distributing flyers promoting one of those cash for gold scams. Aging is regarded as a disability rather than deserving of respect. The aged are regarded as a nuisance and forced to live on the margins. Although, as Harry Potter and many a superhero would argue, being invisible can also take the form of a blessing by granting access to previously off-limits spaces. In Kyra’s case, disguised as an octogenarian, no one gives her monthly trips to the credit union a second thought.

This is Michelle Pfeiffer’s movie and Dosunmu knows it. With maybe two exceptions, he does not resort to fancy camerawork or innovative storytelling. Kyra is almost always on screen, though placed at the edge of the frame. The camera is most notable for its stillness in capturing much of the story through glass windows and doors, in reflective surfaces, and down narrow hallways framing shadowy figures. There is always something happening on the periphery. Dosunmu and cinematographer Bradford Young challenge the audience to retrain their eyes, adjust to the darkness (of the subject matter and dark sepia palette), and look for life happening on the edges. When in conversation, the camera never cuts from Kyra’s face. Doug can be heard speaking to (or more often pleading with) her off camera, but there is no second camera, placed over her shoulder, catching his dialogue or reactions. The camera sees what Doug sees. It sees only her, even if no one else seems to. One can only live on the edge so long before falling off.

The presence of Michelle Pfeiffer onscreen is a meta-commentary in and of itself. For nowhere is the sexist directive of winsomeness and worth more prevalent than in Hollywood. Though she is now experiencing a kind of career renaissance with scene-stealing turns in “mother!” and “Murder on the “Orient Express,” it’s not out of the question to inquire, “Where has Michelle Pfeiffer been?” Pfeiffer plays Kyra — a beautiful woman not without vanity coming to terms with the fact that her beauty is no longer the currency it once was — without any vanity of her own. In a bravura performance, Pfeiffer’s Kyra cathartically screams “I’m in here” from behind the locked door of a bathroom stall, demanding that her presence be seen and felt. 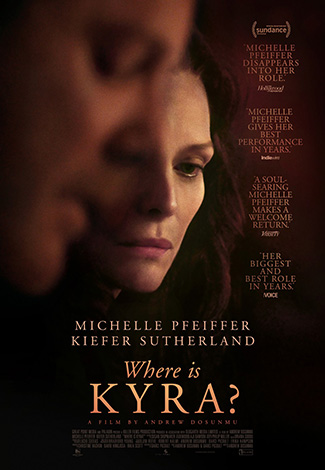