The title of Lars von Trier’s latest film refers to a rogue planet, significantly dwarfing our Earth and heading for it on an inevitable collision course. von Trier sets the countdown to extinction among a wealthy family holed up in a storybook castle, inhabited largely by two sisters, one a force of depressive nature and the other a level-headed wife and mother whose confidence in our world’s continued existence begins to slip away. Divided into two disparate sections, Melancholia is a challenging film, both in format and pacing but occasionally (especially in the final moments) an immensely rewarding one.

We open on Justine’s (Kirsten Dunst) wedding — she’s running late with her fiancée Michael (Alexander Skarsgård). They arrive late much to the dismay of Claire (Charlotte Gainsbourg), who, along with her husband John (Kiefer Sutherland) have graciously provided their stately home for the wedding party. von Trier quickly lets us on the family’s shattered structure — Justine and Claire’s parents trade barbed blows while the sisters have little in common besides a blood relation. Still, it’s a lovely evening and when Dunst’s toothy smile begins to slip away, you know something is critically wrong. Via morsels of dialogue, we learn that Justine suffers from depression that she’s had it before and it might all be coming back tonight. Claire, exasperated offers no real help, leaving Justine to sulk and then soak in the bathtub while Sutherland’s John grows more agitated with Justine and her bitter mother Gaby (Charlotte Rampling).

I can’t overstate how involving the first half of this film is — it’s a dazzling display of acting prowess from a large and willing cast. Each role fills positively lived in and I haven’t even mentioned Stellan Skarsgård’s off-putting Jack, Justine’s boss, who gets a younger employee to hound Justine all night for an advertising tagline or John Hurt’s Dexter, Justine’s father, a playboy well past his prime who could be the best confidant for his daughter if only he’d notice her pleas. 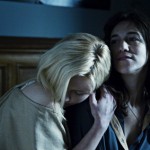 A shoulder to cry upon.

It’s a fascinating portrait of a shattered family that is frequently overshadowed by Dunst’s impressive performance — she is the star of the wedding and as the acrid hooks of depression sink their way into the mind, her body gives way and she is left immobilized and capable of few words, and fewer actions. It’s painful to watch Alexander Skarsgård’s love-struck Michael come down from a wedding high to face a woman he does not understand or truly know how to comfort — and a wife he’ll have to look after for the rest of his life. Dunst’s depression is only matched by her genuine disgust for Stellan Skarsgård’s Jack, who she dismantles in a tense confrontation.

If Melancholia had sustained this air of unrestrained humanity for its entire running time, I would be in love with the film — and yet, von Trier almost deliberately caps the wedding off and returns us to the castle manor to watch Claire’s confidence slip away in the looming days of Melancholia’s approach. Sutherland’s John assures her that “scientists” have conveyed with utmost certainty that the planet will pass by the earth, something lent the stomach churning title of a “near miss.” After “Antichrist,” it’s a genuine relief that Gainsbourg’s nerves giving way don’t lead to any kind of self-mutilation — instead, she regressed into childlike habits, hiding out on her property and striving to lose herself in the relative safety of the estate. Justine, visiting and now fully given herself over to depression, views the situation with a discerning eye — if may be the end of the world, but is it necessarily worse than her current state?

The show stopping moments of Melancholia appear respectively in the beginning and the end — it’s not the imagery you’d immediately expect and von Trier flaunts a painterly eye with astounding moments that appear later in the film. Aside from that, how you judge the film will largely depend on whether you prefer the first or second halves or enjoy both equally. I was enraptured by the first half but found the second immensely slow and frequently boring — rescued as it is by the final minutes of the film. Maybe it’s von Trier’s intention to slow the pace down, to wind us up in waiting for the payoff to come; this is a disaster movie after all and we need our fix. Maybe the waiting is part of the artistry or maybe it’s just the director and actors indulging in their talent. Either way, depending on what you can salvage from the film, it has the potential to be a stand-alone masterpiece, a curious experiment or an outright bore. You decide. 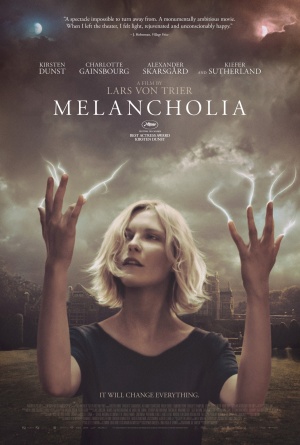