Obey lays out its elements early on, declaring its setting, its interest and its milieu from the opening shot. Yet, within this shot and throughout the film, writer-director Jamie Jones also defies expectation. In the opening sequence before the titles, a deep focus long take captures six young people work towards the camera, discussing the sort of things young people do such as embarrassing sexual exploits they have heard about. The car registration plates and accents locate the action in London, and the characters walking in the road indicates a somewhat defiant, devil-may-care attitude. Indeed, the cars that cross the intersection ahead of them may raise expectations that there will be an accident, but the six youths are cautious enough to pause for traffic. As the conversation moves to possible theft from a car, an expected element emerges. The group has carried equal emphasis throughout this one shot sequence, but the protagonist emerges among them, as Leon (Marcus Rutherford) stakes a claim on the drama, and events escalate. This opening operates as a microcosm of the film as a whole, as Leon emerges from a mass for us to follow him, while wider events are always apparent.

Generically, Obey fits within the tradition of British social realism, much like “Lapse of Honour” with its emphasis on working class people, poverty and associated problems including alcoholism, abuse and racial tensions. Leon is an unemployed 19-year old with no qualifications or experience, as described by his helpful though frustrated social worker Rebecca (Rachel Stubbings, “The Ghoul”). His father is nowhere to be seen and his mother Chelsea (T’Nia Miller, “Witless” TV series) is an alcoholic with a thuggish boyfriend Chris (James Atwell). Leon does what he can to support her but has few prospects or indeed ambitions. He works out at a local gym, boxing his frustration out but often lacking focus, as his trainers loudly reminds him while adversaries pummel him.

The boxing sequences are energetically shot and the viewer might think that the sport will open doors to success and redemption. As the drama develops though, Jones shows that his interest lies in exploring less clichéd conceits. Battered both at home and out, Leon seeks solace with his friends, especially a new acquaintance in the form of the spirited and alluring Twiggy (Sophie Kennedy Clark, “Nymphomaniac,” looking bizarrely like an English Kirsten Dunst). A touching and amusing scene in which Leon acquires Twiggy’s phone number is one of the film’s softer moments, as is a deeply tender sequence when Twiggy tends to an injured Leon. Jones frames this sequence in tight shots with low lighting, which highlights Twiggy’s blonde hair and kind eyes, giving her an angelic appearance. It is easy to see why Leon is smitten with her, idealizing her as something different and therefore better than he is accustomed to.

The visual texture of the scene in which Twiggy treats Leon’s wounds is typical of Jones’ cinematic dexterity, as the boxing sequences are shot with quick cuts and explosive sound, while exterior long takes emphasize the locations of London, both the dilapidated buildings and vibrant graffiti as well as the varied people that populate the streets, houses and squats. There are also moments of lyrical beauty, including a brief sojourn aboard a narrow boat that plays out as an elegant montage in soft focus, the river, trees and figures appearing heavenly. Like much of the film — especially the scenes featuring Twiggy — the visual palette expresses Leon’s desire for something other than his grim everyday experience. Yet the idyll that Twiggy suggests, as well as her stance of political resistance, is one of privilege that Leon is separate from. In one heartbreaking scene, again largely rendered in long takes that compel the viewer to keep watching, Leon sees the gulf between what he yearns for and how he actually lives, and the only thing that bridges that gulf is violence.

The contrast between what Leon somewhat inarticulately desires and the reality of his life and environment is emphasized with regular news reports on various televisions of steadily increasing riots and responsive police action. Encounters between civilians and riot police escalate as the drama develops, with altercations becoming more physical and incendiary elements appearing both emotionally and literally. This is not an individual story of hope thanks to redemptive love, friendship and the possibility of a bright future. Rather, the film maintains a bleak tone as it depicts a spiral into the seemingly irresistible pull of violence. In doing so, it serves as a fascinating microcosm of the social phenomenon of rioting. The notion of a rioting mob implies an anonymous mass without differentiation or individuality, where each person “obeys” a mob mentality. What Obey does is interrogate that prejudice, delving into the background of one youth touched by violence and steeped in deprivation. This delving imbues Leon with humanity and personality, making his arc all the more tragic.

The film’s climax is a visceral experience that slips into horror territory reminiscent of Kathryn Bigelow’s “Detroit,” and the final image throws questions back at the viewer. What other course was available? How do we feel about this person and others like him? And what might we do in the same circumstances? We might condemn the actions that we see, but having seen how we got there, perhaps we will question our own perception of violent offenders and come to see them as individuals caught up in events that touch us all. With Obey, Jones has created an intense and moving portrait of working class life, with a masterful visual design and a provocative social message. 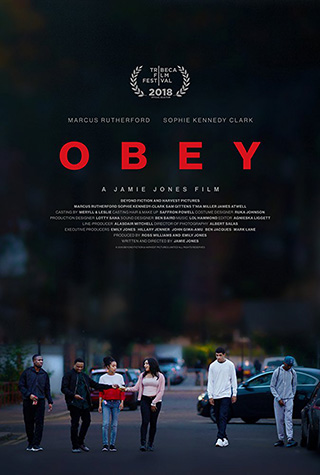