With Detroit, Oscar winning director Kathryn Bigelow (“The Hurt Locker”) and her team have put together a kick-in-the-mouth, knock-your-socks-off movie experience you won’t forget in a docudrama staging of the Detroit race-riots of 1967.

Starting with a routine police raid of an illegal after hours club where the local residents harass the police as they are lining-up the patrons for hauling to jail, things quickly turn from shouting and insults to stones and firebombs prompting the cops to start using weapons to fire back. That leads to snipers on the rooftops firing at police which in turn provokes the governor, George Romney, to send in the National Guard with armed vehicles to fire back at the snipers.

About two-thirds into Detroit, when the city is on fire and many are dead, the film switches gears and focuses on the the Algiers Motel, a spot where the police think the snipers are hiding. They go in hot to find the sniper and the gun and start terrorizing and torturing the people they find there, ending up with three African Americans dead, nine people beaten, and no evidence whatsoever of a sniper.

The Algiers sequence is presented as it happened in real-time; a terrifying amalgam of our nation’s police racism and cruelty acted and filmed so well you’ll feel victimized by the unbridled sadism. The screenplay for the incident comes from interviews Bigelow and screenwriter Mark Boal did with those who were there (security guard Melvin Dismukes played by John Boyega, “Star Wars: The Force Awakens,” being one of many).

With some shaky hand-held camera techniques, and sharp editing, we’re pulled in close and personal to this powerful and traumatizing incident. It details how the racism rot spreads through the police officers — if one man-in-uniform, Philip Krauss (British actor, Will Poulter, “The Revenant,” in as good a performance as you’ll see all year), can be an open racist so can the rest, and after all, they are the police doing the right thing.

What Bigelow emphasizes here is how things aren’t much different now, fifty years later. The police get as caught up in the contagion of riot fever just as much as the street-gangs did throwing fire bombs and sniper shooting from the roof-tops that started the whole thing. Detroit makes clear that as the riot degenerates into uncontrollable violence, the issues of racism and civil rights fade into the darkness as the city is destroying itself in a war, both sides fighting for their lives.

The film ends with the trial of the police officers — Krauss, Flynn (Ben O’Toole, “Hacksaw Ridge”) and Demens (Jack Reynor, “Free Fire”) — who were the orchestrators at the Algiers, charged with murder, physical and verbal abuse. They are intensely defended by their attorney Auerbach (John Krasinski, “13 Hours: The Secret Soldiers of Benghazi”) as heroes and not out-of-control torturers. And again, just like today, despite a mountain of evidence, they were all found not-guilty and let go.

Expect to see a lot of Oscar talk around this one in the coming months. It’s not hype. The superior artistic craftsmanship at all technical and performance levels surely deserves the recognition. 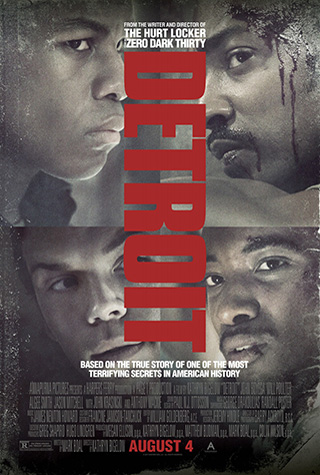