As of late the cinematic genre of choice happens to be the ostentatious antics of raunchy female groupings — something to feast on for the estrogen crowd. For the most part these “loose ladies of the pack” films have been profitable, whether bordering on the reputation of a box office cult hit like “Bridesmaids” or following the rancid, chick-flick formula of “How to Be Single” or the tired and tepid “Rough Night.”

Director Lee (“Welcome Home, Roscoe Jenkins”) and screenwriters Kenya Barris (“Black-ish” TV series) and Tracy Oliver (“Survivor’s Remorse” TV series) concoct a colorfully crass and crafty display of wacky womanhood that meshes so wonderfully with the chaos that adds to the concept of lifelong friends. The farcical fortitude does not strictly stem from the random situational set-ups, but instead comes from the giddiness that makes up the roguish characterizations.

As in previous films such as “The Best Man Holiday” and “Barbershop: The Next Cut,” Lee has shown a natural flair for spicing up his films with rollicking personalities that unite under the umbrella of outlandish social gatherings. In Girls Trip the central focus is highlighting the treasured connection of friendship among a quartet of former college cuties looking to unwind and take their sense of togetherness to another level as they head to New Orleans for the Essence Music Festival.

The plot revolves around the famed Flossy Posse — a tight knit foursome of ex-sorority sisters that have not laid eyes on one another in many years. There is Ryan (Regina Hall, “When the Bough Breaks”), a successful self-help author and influential media darling with a booming career and marriage to a hunky NFL player (Mike Colter, “Luke Cage” TV series); Sasha (Queen Latifah, “Joyful Noise”), a journalist/gossip-maker; Lisa (Jada Pinkett Smith, “Bad Moms”), a single mother and nurse; and the extremely roguish Dina (Tiffany Haddish, “Keanu”).

Instantly, the so-called trip for the four college besties is a grab bag of cockeyed conflict. Both deranged delight and dissension arise among the more accomplished Ryan and her tag-a-long gregarious gal pals as the raucous shenanigans shared by the women are on the level of dirty-minded “Magic Mike XXL” proportions. Sure, Lee tosses in a few subplots to stir the pot that occasionally feel incidental (the girls see through the mighty Ryan’s “second Oprah” armor that is tainted with vulnerability, Sasha’s tabloid tendencies could expose Ryan’s fairy tale existence with her hard-bodied hunk of a cheating hubby, etc.). Still, it is refreshing to see the contrasting dynamics that make up this pretty pack.

The heart and hilarity of Girls Trip rests on the shoulders of Pinkett Smith and Haddish, in particular. It is such a revelation to witness Pinkett Smith’s reserved, lonely-hearted Lisa find some affection from an attractive stranger (Kofi Siriboe, “Straight Outta Compton”), while Haddish’s Dina is the extreme opposite as she stops at nothing to demonstrate the partying hardcore harlot she is at heart. Lisa’s sweetened shyness, Dina’s over-the-top devilish diva, Ryan’s masked success both professionally and personally and Sasha’s shifting career goals — all are joyously realized amid the suggestive humor, low brow jokes and celebrated insanity.

It seems Bourbon Street still has what it takes as these past collegiate queens add their healthy measurement of fun-loving filthiness in the name of womanhood and friendship to its ever-growing list of escapades. The comedic concoction of Latifah, Hall, Pinkett Smith and Haddish (along with a sprinkling of several top name cameos from black-themed music and media entertainment) definitely allows for an adventurous no-holds field trip that delivers on a whole new interpretation of what a “rough night” truly is. 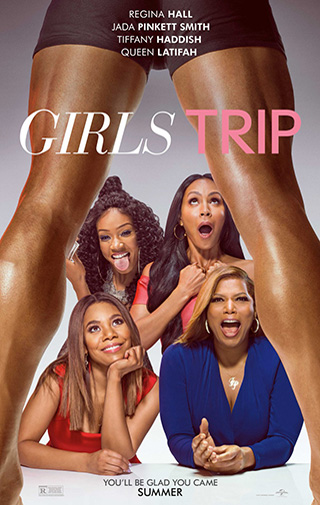