Oh no, ladies, what are youse doing?

Not asking this is not an option when every action to clear bride-to-be Jess (Scarlett Johansson, “Hail, Caesar!”) and her friends’ involuntary-manslaughtering ways in Rough Night is just reducing Lt. Horatio Caine and team’s investigation time. The bachelorette’s activist friend Frankie (Ilana Glazer, “The Night Before”) said it right: Had the kindergarten teacher bestie Alice (Jillian Bell, “Fist Fight”) not been so “lethally horny,” Scotty the intense stripper (Ryan Cooper, “Day 5” TV series) would have lit up the pad rather than spilling blood all over it. At one point, the crimson trail goes down the beach as well when the eccentric Australian, Pippa (Kate McKinnon, “Office Christmas Party”), elects to give Scotty an aquatic burial — a.k.a. the most effective way to avoid what the lawyer uncle of divorcee Blair (Zoë Kravitz, “Fantastic Beasts and Where to Find Them”) said to be some 15 years in prison.

Also querying the ladies’ decisions is the traps of the genre, albeit with greater frustration tonally since Rough Night surprisingly manages to avoid them. Sex, the organs for it, drugs, and brutal “look at them fall” ha-has — usual suspects of contemporary R-rated comedies have their own reunion here, but first-time director Lucia Aniello dresses them up in a new way. Post-college parties should never be in the same mold as those during the semester, agreed? The crudeness comes continuously — such is the playbook — though Aniello reveals the sources of it through dialogue or considerate displays rather than pieing them exclusively in our eyeballs. Exhibit A: Frankie at one point needs to see a man’s privates to identify him, and the entire act is filmed from the back of her head. Cry “watered down,” certain people will, but if it is not serving the narrative or the more mature kind of physical humor, Aniello won’t invest any frame. That is a total contrast to another by-the-beach comedy released earlier this year, “Baywatch,” which seems to have an unnerving penile infatuation.

In another departure from that film, the script of Rough Night, which Aniello co-wrote with Paul W. Downs, are capable to draw laughs without demeaning anyone. Technically, Alice often calls Pippa a Kiwi to draw the “Jess’ BFF” territory, but that bit of insensitivity does not go unaddressed. In its exhibition of girl power, the film could have made buffoons out of its male characters, in particular Jess’ fiancé, Peter (played by Downs, “Ghost Team”), who is also panicking after assuming his love has gotten cold feet. Heeding the advice of his friends (wine connoisseurs, all, they seem to be in an introductory sequence), Peter decides to pull a red-eye-by-car to Miami, backseat full of Red Bull, expired Adderall and adult diapers. That last bit is a mine for excrement jokes, but Aniello says no and has characters whom Paul encounters to ignore them, too. There are more pressing (and more hilarious) matters that can be found on the road than on the individual, a notable one involves a state trooper who stops Peter when the latter, dedicated to learn (presumably) Billie Jean’s lyrics in Spanish, ignores the speed limit.

But perhaps out of uncertainty that the raunchiness won’t have enough bite, the film de-gaps itself with ticklers of the less-novel kind. Is there really no other dirty song to dance to than Khia’s? Is there also no alternative to describe the feeling of being a lady in a town full of pickles? Luckily, they are brief and regularly followed up with a fresher breeze — yes, even the attractive neighbors Pietro and Lea (Ty Burrell, “Modern Family” TV series and Demi Moore, “Margin Call”) could have, and should have, been better off making somebody’s night less tolerable in another film. An ultimately perfunctory threesome with them we can do without, but surfacing afterward is a doozy of a reaction line (“She was inside me. She was outside me. And then she was me”) and Kravitz’s pitch-perfect delivery that elevates, briefly, her consistently satisfactory performance.

A tad better in the mostly-foreign-to-comedies acting department is Johansson, yet her timing for the emotional is ultimately sharper than the comical. Rough Night does offer the actress necessary downtime from that mediocre “Ghost in the Shell,” though, and it is visible in her expressions. However, to have McKinnon and Bell in the same space is akin to an Adele versus Taylor Swift scenario where the less-experienced, while capable, has to take in a bit of the other’s shadow. The most pleasant surprise has to be Glazer — a Lizzie Caplan-likeness that needs not an accent or feistiness to snatch the spotlight — sometimes for her own and sometimes for the team that is pushing the film into the masculine-majority, female-led comedy space.

It is rare to wish that a film won’t live up to its title, and in this case Rough Night succeeds. It is still in danger, however, if Sony Pictures remains steadfast to its idiotic “Clean Version” fiasco. Don’t start to form a “-gate” when all-out gag-fests like these are your major bank magnet. 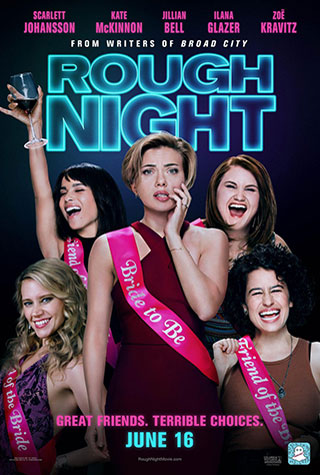