Does anyone want to play a game?

Shake your head if it’s Max (Jason Bateman, “Office Christmas Party”) and Annie (Rachel McAdams, “Doctor Strange”) asking, unless losing is your thing. In a slickly assembled montage, the couple is revealed to be “all day, every day” champions of trivia, scrabble and charades. But they’re only game-night royalty when Max’s brother, Brooks (Kyle Chandler, “Manchester by the Sea”), isn’t around, a person whose skills — and jawline, and wallet depth, and career — easily trounce Max. Imagine being so much better than you he becomes the root of your anxiety and low sperm count. Like it or not, he’s in town, planning to flex his superiority with an invite to the mansion to play a notched-up version of game night. The idea here is to turn life into a board and the players — Brooks, Max, Annie, determined Kevin (Lamorne Morris, “Barbershop: The Next Cut”), gentle Michelle (Kylie Bunbury, “The Sitter”), birdbrained Ryan (Billy Magnussen, “Bridge of Spies”) plus crafty Sarah (Sharon Horgan, “Death of a Superhero”) — into the pieces. So far so fun, and then the mob joins in, sprinkling more than a few acts of mayhem and extremely close-calls.

Here’s a shocker: The film this setup belongs to, Game Night, is better than what the trailers suggest. What looks like an easy paycheck for performers whose body of work assures they will never need one turns out to be anything but. It is the cast’s attitude that makes it so; each person’s energy and commitment is visible from the outset. Bateman scores as an insecure-but-competitive buffoon — think of his character in “The Gift” minus the aggression — while right alongside him is a delightfully spirited McAdams whose role here thankfully adds more distance from a bizarre “support of supporting roles,” talent-wasting phase. Bunbury and Morris, despite the limited screen time, make an impression still; she with the grace and he with a killer impression of an Oscar winner. But the show-stealer has to be the golden-haired, “Black Mirror” alum Jesse Plemons, here as Max and Annie’s police officer who has been casted out of game nights because of an unfortunate resemblance to Hannibal Lecter, personality-wise, a cute Westie by his side or not. See, comedy, Plemons didn’t need to pack on the pounds or wear oil-coated slippers to court the laughs; just presence and careful timing will suffice.

Another surprise Game Night offers is how punchy its tenser beats are. It’s “no harm, no foul” if directors John Francis Daley and Jonathan Goldstein treat these bits as filler — the film is a comedy above all — but, lo and behold, for this occasion they are the main event. A session of hot potato? Sure, but let’s make the potato a Faberge egg and capture the whole game in one take, from one room to another, one floor to another. Cat and mouse? Okay, call up a shady van and swanky Nissan, and let’s emphasize on palpable velocity rather than over-the-top destruction (hello, “30 Minutes or Less”). The material is really elevated thanks to the directors’ playing overachievers and Barry Peterson’s inspired camerawork, which sometimes uses tilt-shift photography to appropriately gamify the world. Now that’s a neat callback to what Brooks implies about the night: A period where it’s impossible to discern what is real and what isn’t.

But the hyper-vibrancy from the players and the playspace’s design seem to be compensating for Mark Perez’s muddled script. Had the tone gone full-thriller or full-comedy, perhaps everybody’s game night would be the entertainment it sets out to be; the blend right now takes viewer through highs and lows in one sitting, through a good point there and something less so afterward. Appreciate the effort to have this aspect of the film serve the “playing a game” motif, but there’s a point where “ah-ha” becomes “trying too hard.” Though there are zero pratfalls — and, well, there’s one gross-out (Bateman and McAdams made it tolerable, though) — the reliance on pop-culture references most of the time disrupts the pacing and mutes our cue to laugh. Also, a limit seems to be apparent on how much Michelle and Kevin can contribute to the night, as well as how many types of gags they can partake in. Regarding the dark forces that hover over the fun, they’re constructed with more complexity than necessary, what with failed Panera deals and threats from monster-voiced “The Bulgarian” (fans of “Dexter,” where you at?) that dulls the emotional payoffs’ potency.

Sorry, Game Night, but David Fincher’s 1997 film, “The Game,” remains the undisputed expert in balancing the parts making up its concept and, in the bigger picture, the kind of game night in which repeats will still summon the nods. 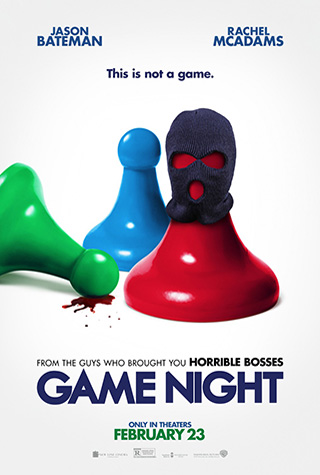