There are many variables transpiring in the gritty, yet grating, urban crime flick Proud Mary that want desperately to embrace themes of unconventional motherly instincts and clichéd street-wise mayhem. Unfortunately for “The Curious Case of Benjamin Button” Oscar-nominated star Taraji P. Henson (who also has an executive producing credit for this lopsided actioner), her labored foray into the criminal action-packed genre feels rather generic in its pseudo-throbbing urgency.

Clearly, Henson had hopes this streetwise scrapper would propel her big screen aspirations into butt-kicking, gun-toting glory with a touch of pasted-on consciousness. In essence, her Proud Mary clumsily echoes the familiar vibes of a blaxploitation chick flick in the tradition of nostalgic sassy 70’s selections as “Coffy,” “Foxy Brown,” “Cleopatra Jones,” and “Sheba, Baby.” Although Hanson certainly has the sensual swagger and knockout beauty that can easily rival the regal recklessness of veteran badass babes of yesteryear like Pam Grier, Tamara Dobson or Sheila Frazier, her punchless homage seriously pales in comparison to the polyester period dynamos that showcased frantic bullet-dodging black women in all their inner-city fury and flashiness.

Director Babak Najafi’s (“London Has Fallen”) pedestrian direction from a transparent script hatched by a trio of screenwriters does not allow for any discernible intrigue, vitality or unpredictability, and wastes the productive energies of Hanson as a Boston-based hitwoman named Mary hired to exterminate a critical target for her sinister enforcers. It’s this one assignment, in particular, that will test her cold-blooded heart and question her hostile line of work.

The distinctive hitch to this particular assignment? Mary is conflicted about the young boy Danny (Jahi Di’Allo Winston, “The Upside”) who happened to be the son of a man she offed. Mary has been conditioned to be ruthless and business-like in her deadly profession, yet somehow she feels compelled to keep a watchful eye on the orphaned Danny since she was the one who snuffed the life out of his old man. Thus, Mary pulls the trigger (so to speak figuratively) as she decides to eventually act as the boy’s surrogate mother. And after finally welcoming Danny into her home, the killer caretaker is tasked with keeping her involvement in Danny’s father’s death from him no matter how badly it weighs on her conscious.

In the meantime, Mary has her hands full as she is engaged in a Boston mob turf war headed up by her boss Benny (Danny Glover, “Shooter”), the man who taught her the ropes in the killing trade. Also, Mary has even managed to carve out a romantic relationship between hits with the crime kingpin’s twisted son Tom (Billy Brown, “Cloverfield”). Anyway, the battle between Benny and his crew is raging against the gangster Uncle (Xander Berkeley, “Allegiant”) and his unsavory bunch. Bodies are scattered left and right, blood is in the streets, side deals are made and reneged. It’s all there as the film goes through its sluggish, uneven motions setting itself up as a wannabe urban crime thriller.

Henson, whose spark ignites each week in the prime time TV series “Empire,” is decidedly a wise choice to tackle the lead role, but she is bogged down by the conventional boundaries of a toothless formulaic potboiler that struggles mightily to capture the moody allure of the aforementioned female-powered blaxploitation titles. In fact, Proud Mary is shamelessly gimmicky in execution as it halfheartedly attempts to ape an iron woman’s anti-hero empowerment. Ultimately, it’s banal, drearily conceived and plodding, delivering very little for this Mary to be proud of. 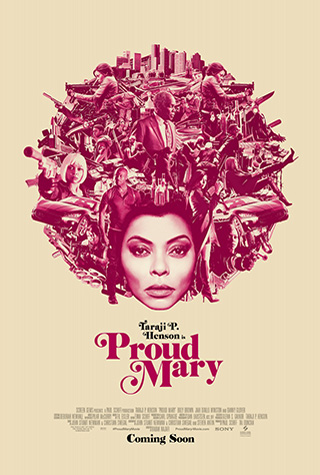