Animals never have it easy in Bong Joon-ho’s world: “Barking Dogs Never Bite” paints those that yap as vermin that need terminating, “The Host” mutates a fish into a rampaging abomination and now Okja follows a hybrid fated for the abattoir. Yet, rather than rage at or scurry away from the beast, to hand out persimmons and give cuddles is what this film desires. The manatee-hippo-swine combo will have them — the cuddles — and a lot, but not without some initial reluctance.

Monsanto-like Mirando is a global food conglomerate with a history that its new aberrant CEO, Lucy (Tilda Swinton, “Doctor Strange”), would like to change. In an introductory company presentation sequence that Bong directed like a three-act ballet, Lucy walks reporters through the firm’s newest endeavor, Super Pig Project, where 26 farmers around the world are tasked to raise their own “revolution of the livestock industry” for ten years before Mirando’s QA crew arrives. Okja, as named by her Korean human companion Mija (Ahn Seo-Hyun, “The Housemaid”), is the most eat-worthy, unfortunately. According to the itinerary, she will be flown to New York for a dedicated pageant contest and then processing.

At every turn in Okja, from the script Bong co-wrote with Jon Ronson, is utter rosiness prior to ominous flip. Cometh the QA (or is it TV?) crew, all cheery and hip, but its leader — funky zoologist Johnny Wilcox (Jake Gyllenhaal, “Demolition”) — couldn’t be more thin-skinned and will hop over to manic if his ego is bruised. Lucy is always grinning and dolled up, but that is to veil her frustration at constantly being overshadowed by Mirando’s last-CEO-slash-“twinnie” Nancy (ah, another performer-times-two act in 2017, however, this one loses to Fassbender in “Alien: Covenant”). Members of the Animal Liberation Front (ALF) execute their cause with conviction, but K (Steven Yeun, “I Origins”) has to deliberately mistranslate Jay’s (Paul Dano, “Love & Mercy”) words to Mija so they can move on exposing Mirando. The brain can rarely find respite throughout Okja, having to process each phase of Bong’s bombardment of the wild and the weird (Gyllenhaal shall indisputably take home the “wildest and weirdest” trophy), all of which are scrumptiously framed and — whenever needed — see no issue with pieing socio-political commentary into your face.

In that zaniness, though, is the fireworks.

Okja is similar to “Snowpiercer” in this regard, where inherently elaborate set pieces are made more so, always in gratifying ways. For example, Mija slips off a cliff on the way home, and Okja saves her by taking the fall instead. Being pacifists, the ALF squad uses umbrellas to shield the creature from tranquilizer darts and apologizes to the shooters when they knock them down, all in slow-motion and to John Denver’s “Annie Song.” Still have pursuers? Okja will defecate to evade. Yes. Over-the-top is also the style of the film’s more unnerving periods, such as when super pig-boyfriend Alfonso appears and the lining up for the slaughter, which see Bong delivering anti-consumerism and anti-carnivorism themes with all the weight in his hands. Might take a while for the messages to get in; the nightmarish images and sounds, albeit fleeting and captured from a distance, have to go away first.

One would occasionally wish that Okja had toned down a few things, not for the eardrums’ sake, but because it would score more impact. All it takes are proper diction and presence for Lucy’s right-hand man Frank Dawson (Giancarlo Esposito, “Maze Runner: The Scorch Trials”) to bag the most villainous title, no excess breaths drawn or vocal cords stretched. Nancy’s antagonistic foundation is peppered throughout the film, readying her for a plot point that only succeeds theme-wise. Since it seems like all the writing darlings were kept alive, an intermittent lack of focus and some chipping in the overall experience make themselves known. Never have they done so many of Bong’s prior works, and yet they might be proof that all of the filmmaker’s creative juice are in this production. Netflix and Plan B have made sure of it.

Less eligible for debate is the visuals. Okja marks the first time Bong exhibits a consistent grip on the CGI, meaning one must either really squint or nitpick to unearth a moment of patchy digital work. The monster from “The Host” and the “Snowpiercer” itself, audacious-looking as they are, don’t always appear at their best. Feel free to try, but keep in mind that the four-legged cuteness is realized by animator Erik-Jan De Boer from “Life of Pi” and that Bong has traded his hometown cinematographers for the veteran Darius Khondji. Something to note here: The framing always minimizes Mija, but whereas the downscale makes other humans dwarf her, it beautifully magnifies her bond with the gentle creature. 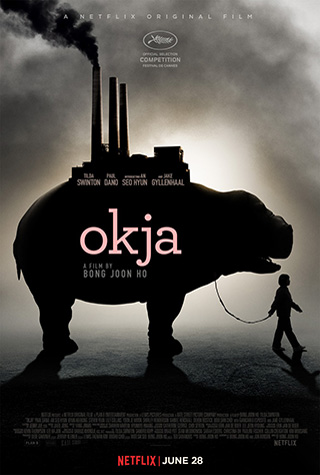