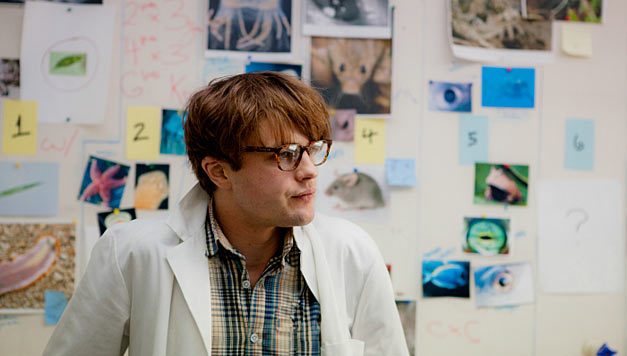 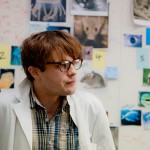 A moment of reflection.

Ian Gray (Michael Pitt) is a PhD student whose research is focused on the evolution of the eye. A confirmed atheist, he hopes his project will prove that the eye has indeed evolved through mutations and disprove once and for all the theory of Intelligent Design. Winner of the Alfred P. Sloan prize at Sundance, Mike Cahill’s lovely and touching I Origins is a follow-up to his first feature, the sci-fi’er, “Another Earth,” which won the same prize at Sundance in 2011. Backed by the songs of Radiohead, I Origins is a thought-provoking look at questions of faith, destiny, and what might lie beyond death.

Ian works at the lab with his assistant, Karen (Brit Marling), an intellectual first-year medical student, and with Kenny (Steven Yeun), Ian’s roommate and research partner. They are looking for a life form that contains the proper genetic material that will allow them to recreate the series of mutations that have led to the complex organ we are familiar with today. Aware that we all have eye biometrics that are specific to us, part of the research he and Kenny does is the cataloging of the uniqueness of each person’s eye pattern. When they find the life form they are looking for — it is a simple worm.

The film spends much of the opening minutes in the lab, but we soon find ourselves at a Halloween party where Ian meets Sofi (Astrid Bergès-Frisbey), an exotic Argentinean/French girl whose stunning eyes are all he can see under her party mask. The two make passionate love in the bathroom but she quickly disappears before he can see her face, get her name, or any contact information. Determined to find her, Ian is guided through the strange recurrence of the number eleven to a billboard that he takes as a metaphor for Sofi’s eyes searching for him, eventually recognizing her by her green eyes on a New York train. The two have a strong physical connection, though their temperaments and views are poles apart.

As a logical scientist, he believes in what can be measured and feels that nothing exists beyond our ordinary sense perception. She is more of a free spirit who thinks that there is a spiritual presence in the world and that the reality we see is but part of a larger one. When Ian discusses his research of the eye and how he wants to discredit the idea of Intelligent Design, Sofi asks, “Why do you try so hard to disprove God?” Ian replies, “Who proved that God is there in the first place.” To that, Sofi tells him, “You live in a room with books, a bed, your logic, but there is a door and there is something more on the other side.” 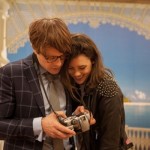 When their relationship is unexpectedly ended, the film jumps ahead seven years to where Dr. Ian Gray and Karen are now both full professors, married with a newborn son. Ian’s reputation has grown and he has written a best-selling book named The Complete Eye. When Tobias, their first child is born, his eyes are scanned as part of a biometric identification system only to discover that his scan matches that of a recently deceased African-American man in his 60s. Trying to make sense of this puzzle, he travels to Idaho and then to the teeming streets of New Delhi, India where he meets Priya (Archie Panjabi), a community service worker who takes him to Salomina (Kashish), an eight-year-old girl whose eyes match the color and shape of Sofi’s, a discovery that challenges his belief system.

I Origins is not a philosophical treatise, but a film about character growth and how personal relationships can affect how we hold our experience of life. In this summer season where mass-produced entertainments focus on zombies, monsters, dysfunctional families, and comic-book heroes, the film stands out as a welcome exception. It is a simple, life-affirming film that is more about letting go and being open to all possibilities than about promoting a particular position. It asks not only whether faith can co-exist with science but whether, in this age of science, enchantment can be restored to our lives. It answers with a resounding yes. 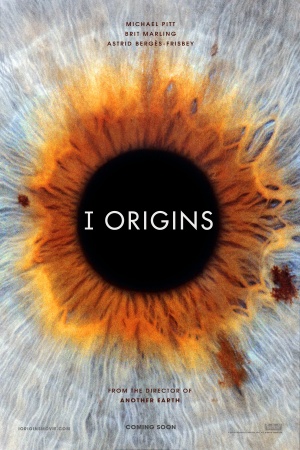